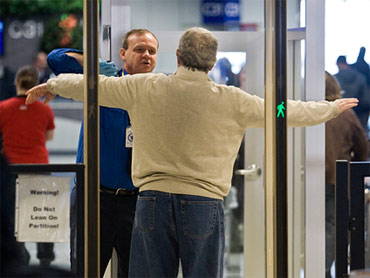 WASHINGTON - The Transportation Security Administration finds itself in Congress' crosshairs yet again, as two TSA officials took to the Hill to defend their agency's use of advanced airport screening machines Tuesday.

The latest TSA testimony comes on the heels of revelations that they made a "calculation error" in safety studies of the screening machines, reports Wired magazine. The flawed results showed radiation levels 10 times higher than expected.

In addition to radiation safety concerns, the two TSA officials once again had to defend against privacy questions, as they have still not apparently allayed fears that the incredibly detailed body scan images the new screening machines take will fall into the wrong hands. They said imaging machines at airports have software that prevents images from being retained, stored or transmitted.

The chairman of the House Oversight and Government Reform subcommittee, Republican Rep. Jason Chaffetz of Utah, said he isn't convinced privacy is being protected.

The TSA officials also insisted a single screening from a "backscatter" machine produces radiation similar to a dose from approximately two minutes of flying on an airplane at 30,000 feet.

A Columbia University radiology researcher testified despite a low risk to an individual, it's possible radiation from the machines could cause cancer in 100 people a year.

The testing error that revealed higher-than-presumed radiation levels from screening machines involves tests conducted on the roughly 250 backscatter X-ray machines produced by Rapiscan of Los Angeles, which has a contract to deliver another 250 machines at a cost of about $180,000 each, reports Wired.

Several flyer advocacy groups have now called for the use of the imaging machines to be discontinued in airport screenings.