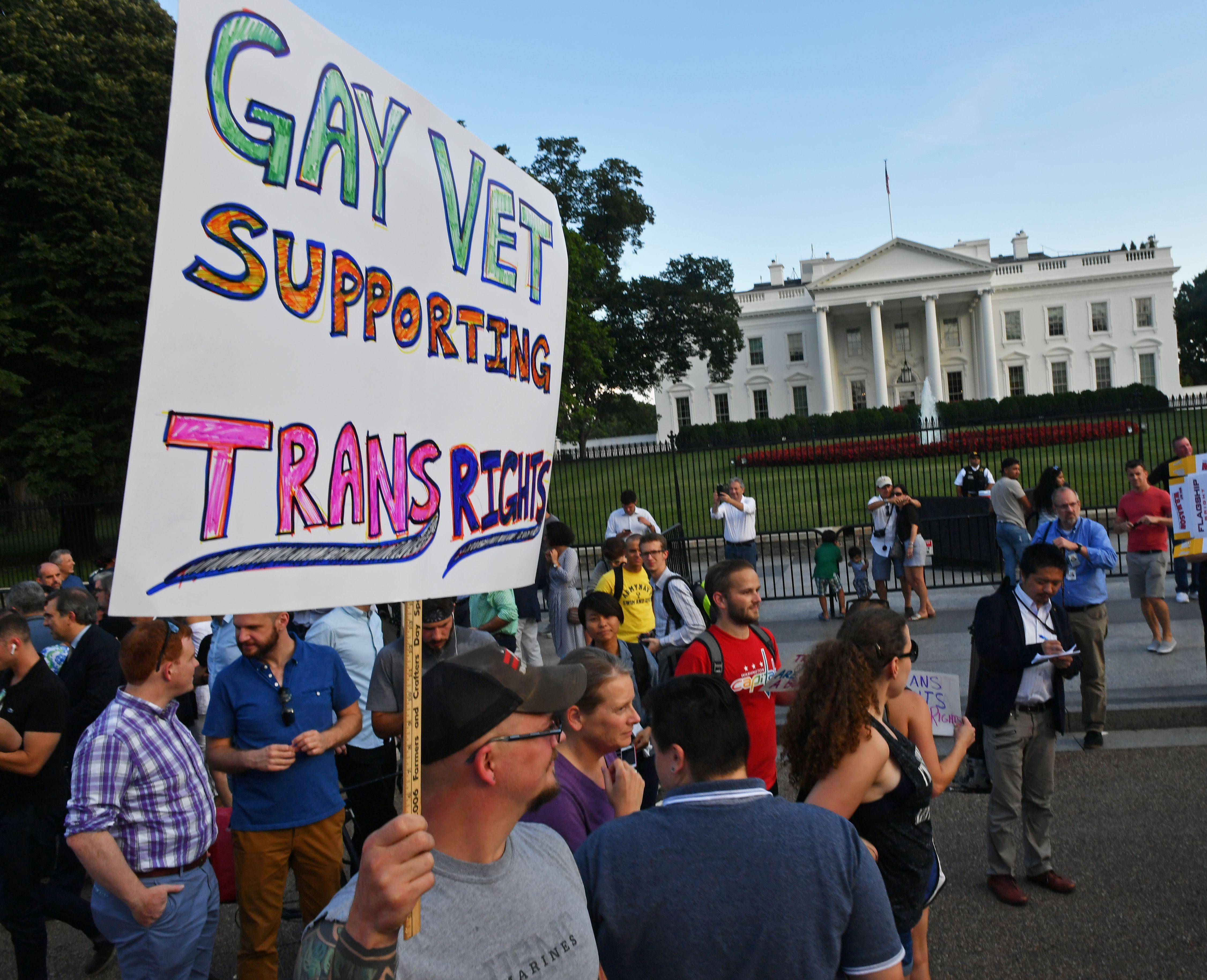 Civil liberties groups are taking President Trump to court over his reversal of an Obama-era directive, officially banning transgender military members from serving in the armed forces.

On Monday, Lambda Legal, a civil rights legal organization defending LGBT cases, partnered with OutServe-SLDN, an advocacy group for actively serving LGBT military personnel and veterans, filed a joint suit against the Trump White House, challenging the constitutionality of the administration's ban on transgender people in the military.

The filing direct responded to Mr. Trump's formal directive to the Department of Defense to authorize the ban and begin the early stages of implementation. The lawsuit, filed in the U.S. District Court for the Western District of Washington, was done so on behalf of two individuals who are seeking to join the military (one current service member who is seeking an appointment as an officer in the military), the Human Rights Campaign, and Gender Justice League, a gender and sexuality civil and human rights organization.

Mr. Trump signed the memo late Friday in the midst of Hurricane Harvey's initial landfall in southern Texas, giving Defense Secretary James Mattis, as well as the secretary of Homeland Security formal authority to return to the ban in place prior to June of 2016.

"The ban is unpatriotic and un-American, singling out valiant transgender Americans who are serving and who want to serve. This harmful purge is yet another baseless attack from the Trump administration on LGBT people," Lambda Legal Staff Attorney Sasha Buchert told CBS News on Tuesday.

"The brave transgender men and women who serve our country make our military stronger. Keeping them out and firing them from their jobs wastes their skill, experience and talent, something particularly dangerous while we our nation faces threats on multiple fronts and military enlistment has declined," Buchert added.

Mr. Trump announced his initial decision in a tweet last month, saying the federal government "will not accept or allow" transgender individuals to serve "in any capacity" in the military.

"It's ironic that a President who claims to be a jobs creator instead is intent on denying qualified Americans employment for no valid reason," said Buchert.

Buchert, a transgender veteran herself, told CBS that the organization was pleased by the "strong, bipartisan statements" that came out of Congress following Mr. Trump's initial announcement, and says Lambda Legal is hopeful as lawmakers return from their August recess that they will see a greater voice sharing in their disappointment with what Buchert called a "shameful and digusting" policy.

She noted that while the organization has heard directly from those serving openly in the military that they are getting support from their comrades as well as leadership within DOD, "it doesn't change fact their entire lives and careers and ability to support themselves and families have been thrown into considerable ambiguity and uncertainty that places them in avery precarious and scary place."

"We're stepping up and we'll do everything we can to defend them them like they're defending us," Buchert added.

While a White House official refused to specify on Friday whether or not there might be any case in which a transgender service member currently in the military could remain in the service, the White House says the Pentagon will decide a best "implementation plan" to address the situation by a deadline of March 23, 2018.

Following Lambda Legal's suit, the national arm of the ACLU, along with Covington & Burling LLP filed their own lawsuit against the administration, on behalf of the ACLU of Maryland and six transgender current members of military.

The ACLU's suit also claims Mr. Trump's violates the "constitutional guarantees of equal protection and substantive due process" by discriminating against transgender people.

ACLU's attorney's cited the DOD's own research conducted on transgender military members released in 2016, which based on a RAND study on the policy, found that the costs of gender transition-related health care treatments for transgender individuals were in fact relatively low.

"This is such an egregious action by the administration that is totally inconsistent with the DOD's own very well reasoned and researched policy from last year that concluded there would be no impact on costs," ACLU staff attorney Chase Strangio told CBS News on Tuesday.

Strangio said the variety of lawsuits being leveled against the administration now offers multiple chances to strike down the ban and help service members whose lives have been impacted by the new order, something Strangio said will be a long fight.

The ACLU says that in addition to the plaintiffs included in its suit, they've been hearing from transgender individuals intending to enlist in the military as well as those who currently serve whose gender reassignment surgeries will be cancelled under the ban's provisions.

"They're really concerned the benefits and service they've spent their lives working toward will be cut off for no other reason than the bias toward transgender individuals of the administration," added Strangio.