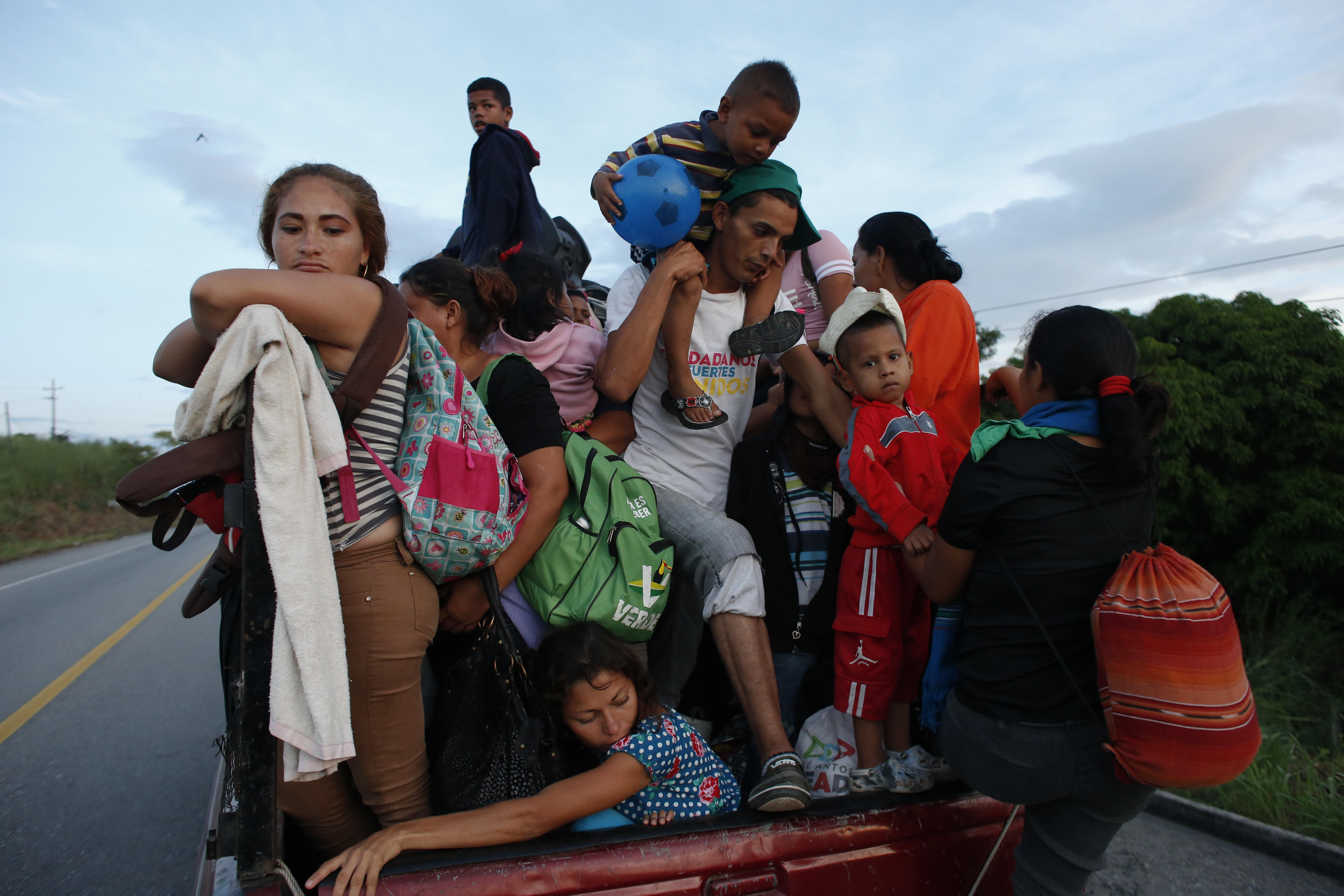 Washington — Since taking office, President Trump has faulted Central American governments for not doing enough to stop migrant families from heading north, and he has repeatedly threatened to cut U.S. assistance to the region — a longstanding multi-million-dollar pillar of American foreign policy.

Over the weekend, the president made good on his threat, directing his administration to halt all foreign aid to El Salvador, Honduras and Guatemala, collectively known as the "Northern Triangle" and the origin point of the unprecedented flow of migrant families journeying towards the U.S.-Mexico border. The State Department then announced it was ending foreign assistance programs for these countries for fiscal years 2017 and 2018.

"After many years (decades), Mexico is apprehending large numbers of people at their Southern Border, mostly from Guatemala, Honduras and El Salvador," Mr. Trump wrote on Twitter Tuesday. "They have ALL been taking U.S. money for years, and doing ABSOLUTELY NOTHING for us."

Although Mr. Trump believes his move will force the region's governments to stop the mass migration of their citizens, Democrats and U.S.-financed non-governmental organizations (NGOs) working in these countries warn the aid cut will have the opposite effect, both prompting more migration and penalizing poor and working-class Central Americans for the failures of their elected leaders.

"He's trying to punish the poor people for the very corrupt governments where they happen to live," Rep. Norma Torres, the only Member of Congress from Central America, told CBS News, referring to the president.

The California Democrat, who was born in Guatemala and came to the U.S. as a five-year-old, said the aid cut will do little to incentivize the governments in El Salvador, Guatemala and Honduras — which have been embroiled in corruption scandals for decades — to try to prevent people from leaving.

"They don't care about the poor people that are coming north. The only thing that these governments care about is ensuring that the flow of money continues to their bank accounts," Torres said.

Suspending U.S. government aid region, Torres said, will only make it more difficult for the people in these developing nations to address the most pressing problems causing the exodus — including widespread crime and gang violence, deep-rooted inequality and mass displacement stemming from climate change. For years, it's been the U.S.-backed NGOs that have spearheaded efforts to address these problems, and who are the recipients of much of the funding that the Trump administration is cutting.

Torres predicted the president's announcement will backfire, increasing migration from the Northern Triangle, rather than decreasing it. "It will almost certainly drive a new — and much larger — wave of migration to our southern border," she said.

"What we're going to see is more people migrating — not less"

"El Salvador would like nothing better than to stop people from fleeing," she added, stressing that the country's workforce is being drained as young people leave or join criminal gangs.

Like dozens of other non-profits and NGOs, Spencer's organization, which leads a program designed to improve the services of childcare facilities and promote youth wellness in El Salvador, is supposed to receive millions of dollars in funds from the U.S. Agency for International Development (USAID), the chief U.S. government distributor of non-military foreign aid.

USAID has allocated hundreds of millions of dollars to subsidize and bolster dozens of socioeconomic development initiatives in El Salvador, Honduras and Guatemala over the next couple of years. The official suspension of all U.S. assistance to the region jeopardizes all these funds. As of Thursday, the administration has yet to outline how the approximately $450 million cut will be implemented — or to clarify if any aid will be exempt from the president's directive.

Reached for comment about the rollout of the cut and its potential impact on the work of U.S.-financed NGOs, the press office of USAID referred CBS News to the State Department. A State Department spokesperson provided CBS News the same statement released over the weekend, in which the agency said it will be "engaging Congress as part of this process" to end foreign assistance programs to the Northern Triangle.

Rick Jones, a senior policy adviser for the USAID-backed international non-profit Catholic Relief Services, told CBS News the halt in U.S. aid to the region will have the "opposite effect" of what the administration intends.

"The message that is going to be sent is 'there is no help on the way. There isn't going to be any more aid. And so, you're on your own,'" Jones said. "And when you send people that message, they're going to be desperate and have no other alternative but to leave."

Meanwhile, Torres noted most of the youth and families fleeing Guatemala are from indigenous communities in the country's southwestern highlands — home to the several former settlements of the ancient Maya civilization. She warned the flow of migrants could increase if large numbers of people from more populated areas of the country feel compelled to leave because opportunities are so scarce.

"Imagine when the people from the cities start coming north," Torres said.

Thousands of Central American families have undertaken the perilous journey north in 2018 and 2019, despite the Trump administration's hardline immigration policies and in the face of an overall decrease in unauthorized immigration to the U.S.

Apprehensions of migrant families between ports of entry along the U.S.-Mexico border have steadily increased since the summer of 2018 and have reached record highs the last couple of months, according to U.S. Customs and Border Protection (CBP) figures. Immigration authorities apprehended about 36,000 families along the southwestern border in February, making it the busiest February for border officials in the last 12 years.

This large-scale migration is the result of the rampant poverty, political persecution, gender-based violence and gang conflict that have plagued El Salvador, Honduras and Guatemala for decades.

Torres says that the present conditions in the Northern Triangle leave few options open for the next generation in their home countries, a privation she, too, understands. "I feel like my future was stolen. I should've had an opportunity to grow up and maybe be a Member of Congress in Guatemala," she said. "But that was not an option for me, as it isn't an option for many children there."

The challenges faced in each country are manifold:

Torres' native Guatemala has seen some economic growth since the end of its bloody civil war in the 1990s, but it continues to grapple with high crime, drug trafficking, political instability and vast poverty, especially among its large indigenous communities. According to an analysis by the World Bank, more than half of Guatemalans live below the poverty line and about a quarter experience extreme poverty.

Once record-setting homicides rate in Honduras have declined but insecurity is still widespread, especially in its urban centers. Also, more than 60 percent of Honduran households live below the poverty line and the country has one highest levels of income inequality in Latin America, according to the World Bank.

Although it also suffers from political corruption and economic inequality, El Salvador's most pressing issue for years has been gang warfare. Over the past decades, El Salvador has become one the most dangerous nations in the Western Hemisphere, constantly topping the list of countries with the highest homicide rates that are not in open war. A bitter rivalry between the two warring transnational gangs Mara Salvatrucha, or MS-13, and Barrio 18 has made the small nation an epicenter of extrajudicial killings, murders for hire, rape, arms trafficking and human smuggling.

Another driver of migration: climate change

Jones, who has been working to curtail poverty and violence in Central America for more than 20 years, said there's a less-discussed issue driving migration in Central America: climate change. As part of his work for Catholic Relief Services in recent months, he has been assisting farmers in the so-called "dry corridor" — a sprawling swath of land in Central America susceptible to drought and flooding — cope with the severe weather affecting their harvests.

"We have broken all the records for flooding and droughts in the last 10 years," Jones said, noting that poor farmers in rural areas in El Salvador, Honduras and Guatemala are often forced to leave their homes because prolonged droughts destroy their crops and livelihoods.

He added the U.S. and its citizens have a "direct" and "moral" responsibility to foster development in the region, given the repercussions of America's foreign policy during the Cold War.

"These programs have been effective"

Jones said the millions of aid from the U.S. over the past years have helped NGOs like his group address the historical and deeply-entrenched problems in the region. And to further discourage migration, he said the Trump administration needs to increase its assistance, not cut it. "It requires more funding to create more opportunity. We know these programs are working, but they are still at a tiny scale," he said. "And so we need to put them on steroids."

Peter Gape said his organization World Vision, an international Christian humanitarian group supported by USAID funds, has been successful in curbing the lack of opportunities for youth in the region, which he noted is one of the chief reasons young people migrate or become affiliated with gangs. The group's largest project, based in the Western highlands of Guatemala, has been offering rural teenagers and young adults educational programs, as well as employment and entrepreneurial opportunities.

"These programs have been effective. And so, for us, the possible cuts to these programs, in our opinion, will have an opposite effect to what the president is trying to accomplish," Gape told CBS News.

Although a State Department official told CBS News Mr. Trump "determined these programs have not effectively prevented illegal immigrants from coming to the United States," the findings and statements of other agencies in the administration contradict the president's assessment. In its country fact sheets for El Salvador, Honduras and Guatemala, USAID touts the feats of USAID-backed programs in the region — including lower homicide rates, job creation, poverty reduction, government transparency and increased crop harvesting.

In one finding in its Honduras fact sheet, the agency states, "Since 2011, USAID agriculture investments have lifted 17,937 families, or over 89,000 people, out of extreme poverty." All three USAID country fact sheets have been updated during the Trump administration.

Torres said the U.S. should continue its aid not only because it has a moral responsibility to the region, but also because it is in America's interest to address the factors driving migration from the region, rather than to spend funds to bolster security and increase detention of migrants along the southwestern border.

"Here we have an opportunity: It's a lot cheaper for us to get involved there in the region than it is to deal with them at our southern border," she said.