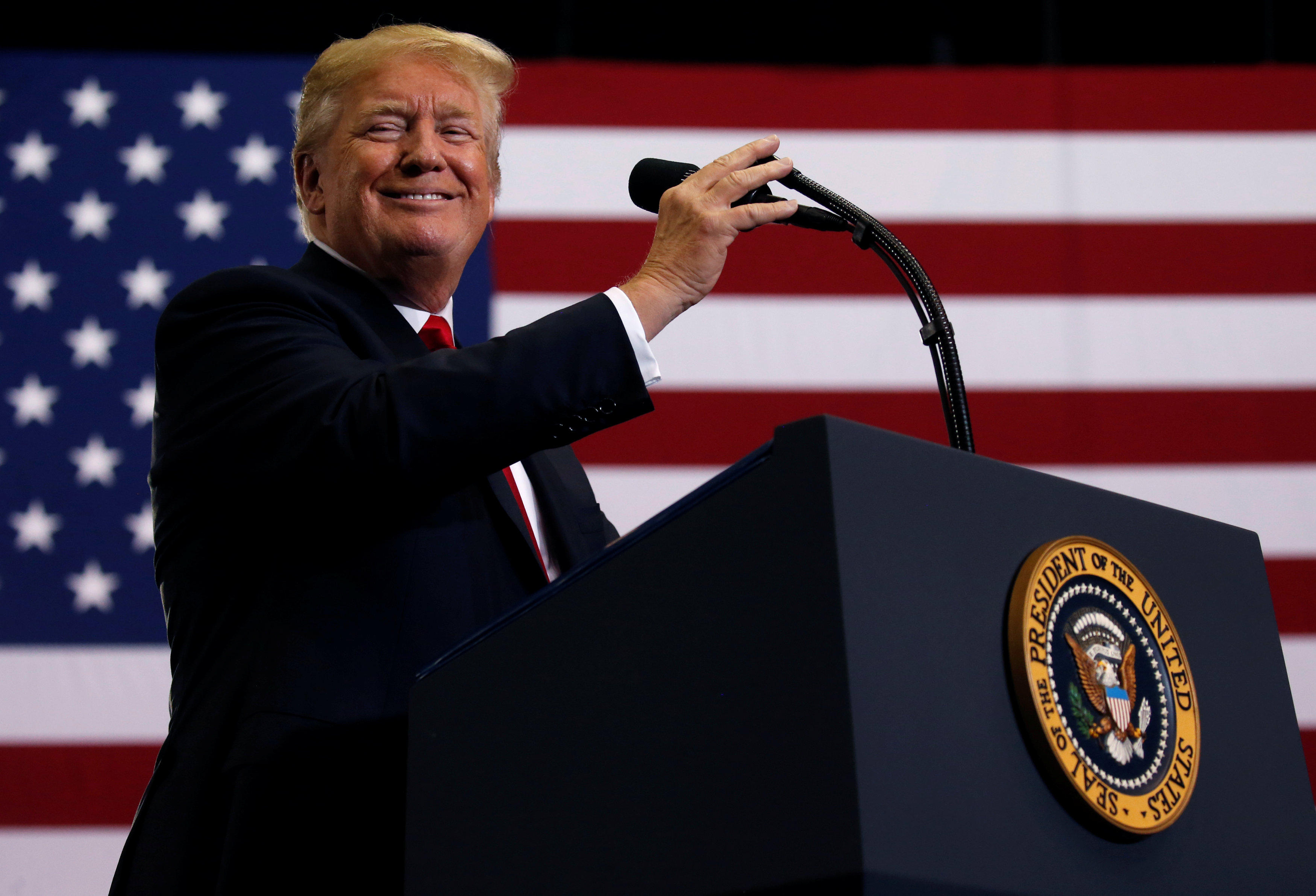 President Donald Trump declared Monday that he has the "absolute right" to pardon himself, but added he had done nothing wrong, asserting his presidential power as the White House is sharpening its political and legal defenses against the special counsel Russia probe.

Mr. Trump's comments on Twitter came a day after attorney Rudy Giuliani played down the possibility that the president could pardon himself, suggesting he might have that authority but would be unwise to use it.

"Pardoning himself would be unthinkable and probably lead to immediate impeachment," Giuliani, a member of Trump's legal team, told NBC's "Meet the Press" on Sunday. "And he has no need to do it, he's done nothing wrong."

In Monday's tweet, Mr. Trump said: "As has been stated by numerous legal scholars, I have the absolute right to PARDON myself, but why would I do that when I have done nothing wrong?" He then again decried special counsel Robert Mueller's probe as a "never ending Witch Hunt."

Trump counselor Kellyanne Conway told reporters at the White House on Monday that the president tweeted about pardoning himself "because you're all covering something that's a hypothetical exercise. That's what you do. I wouldn't say you do it well, but you do it often. That's why he's tweeting about it."

Mr. Trump's legal team is making it clear that it will combat any effort to force the president to testify in front of a grand jury. Giuliani on Sunday underscored one of the main arguments in a newly unveiled letter sent by Mr. Trump's lawyers to Mueller back in January: A president can't be given a grand jury subpoena as part of the investigation into foreign meddling in the 2016 election.

But Giuliani, in a series of television interviews, broke with one of their bolder arguments in the letter that a president could not have committed obstruction of justice because he has ultimate authority over any federal investigation.

Yet the former New York City mayor, who was not on the legal team when the letter was written, added that Mr. Trump "probably does" have the power to pardon himself, an assertion challenged by legal scholars. He says the president's legal team hasn't discussed that option, which many observers believe could plunge the nation into a constitutional crisis.

"I think the political ramifications would be tough," Giuliani told ABC's "This Week." ″Pardoning other people is one thing, pardoning yourself is tough."

CBS News' Paula Reid confirmed that a 1974 memo from the Justice Department's office of legal counsel is the most recent published opinion on the topic of whether Mr. Trump can pardon himself. It says that the president cannot actually pardon himself, but should the president be declared temporarily unable to perform his duties, the vice president could become acting president and as such, could pardon the president. And then, "[t]hereafter the President could resign or resume the duties of his office," the 1974 opinion reads.

Mr. Trump has issued two unrelated pardons in recent days and discussed others, a move that has been interpreted as a possible signal to allies ensnared in the Russia probe.

The letter is dated Jan. 29 and addressed to Mueller from John Dowd, a Trump lawyer who has since resigned from the legal team. Mueller has requested an interview with the president to determine whether he had criminal intent to obstruct the investigation into his associates' possible links to Russia's election interference.

Giuliani said Sunday that a decision about an interview would not be made until after Mr. Trump's summit with North Korean leader Kim Jong Un on June 12 in Singapore, and he cast doubt that it would occur at all.

"I mean, we're leaning toward not," Giuliani told ABC. "But look, if they can convince us that it will be brief, it would be to the point, there were five or six points they have to clarify, and with that, we can get this — this long nightmare for the — for the American public over."

In addition to the legal battles, Mr. Trump's team and allies have waged a public relations campaign against Mueller and the Justice Department to discredit the investigation and soften the impact of the special counsel's potential findings. Giuliani said last week that the special counsel probe may be an "entirely illegitimate investigation" and need to be curtailed because, in his estimation, it was based on inappropriately obtained information from an informant and Comey's memos.

In reality, the FBI began a counterintelligence investigation in July 2016 to determine if Trump campaign associates were coordinating with Russia to tip the election. The investigation was opened after the hacking of Democratic emails that intelligence officials later formally attributed to Russia.

Mr. Trump's team has requested a briefing about the informant, but Giuliani said Sunday that the president would not order the Justice Department to comply because it would negatively affect public opinion. But he continued to cast doubt on the special counsel's eventual findings, suggesting that Mr. Trump has already offered explanations for the matters being investigated and that the special counsel was biased against the president.

"For every one of these things he did, we can write out five reasons why he did it," Giuliani said. "If four of them are completely innocent and one of them is your assumption that it's a guilty motive, which (Trump) would deny, you can't possibly prosecute him."

Mr. Trump's legal team has long pushed the special counsel to narrow the scope of its interview. Giuliani also suggested that Mr. Trump's lawyers had been incorrect when they denied that the president was involved with the letter that offered an explanation for Donald Trump Jr.'s 2016 Trump Tower meeting with Russians who offered damaging information on Democrat Hillary Clinton.

"This is the reason you don't let the president testify," Giuliani told ABC. "Our recollection keeps changing, or we're not even asked a question and somebody makes an assumption."

If Mr. Trump does not consent to an interview, Mueller will have to decide whether to go forward with a historic grand jury subpoena. His team raised the possibility in March of subpoenaing the president, but it is not clear if it is still under active consideration.