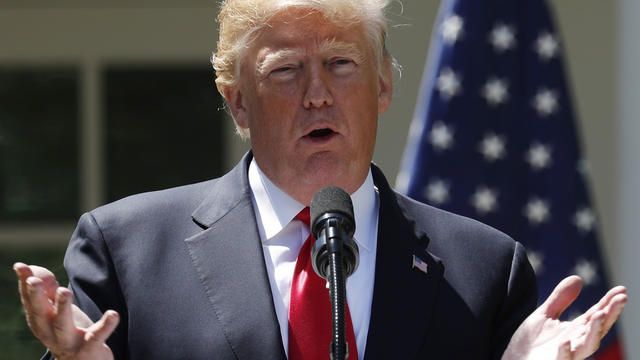 President Trump announced on twitter Monday that he would making his decision on the U.S.' stance on the Iran nuclear deal Tuesday at 2:00 PM at the White House.

His decision comes just days before a May 12 deadline for the U.S. to formally decide if they are withdrawing from the Obama-era nuclear pact.

Mr. Trump has long indicated his frustration with the deal, which he sees as unfair and unable to quash Iran's nuclear aspirations. He slammed the deal as recent as Monday morning, calling it "very badly negotiated" and blamed former Secretary of State John Kerry, who was instrumental in negotiating with Iran during the Obama administration, for "creating this mess in the first place"

While its unclear how Mr. Trump will decide, international allies, including most recently officials from the UK, have been pressing the president to stay a part of the agreement, vowing to find workable solutions to his issues with the deal.

"Face the Nation" moderator Margaret Brennan reports the U.S. and its European allies would create a proposal that addresses Mr. Trump's concerns about the agreement -- ballistic missiles, military site inspections and the sunset clause -- thus allowing Mr. Trump to claim he "fixed" the 2015 international agreement without actually altering a word of the agreement and without Iran's consent. It would be a workaround to help the U.S. and its allies promise to punish Iran for actions that were not included in the 2015 deal. This plan wouldn't include Russia, China and Iran.