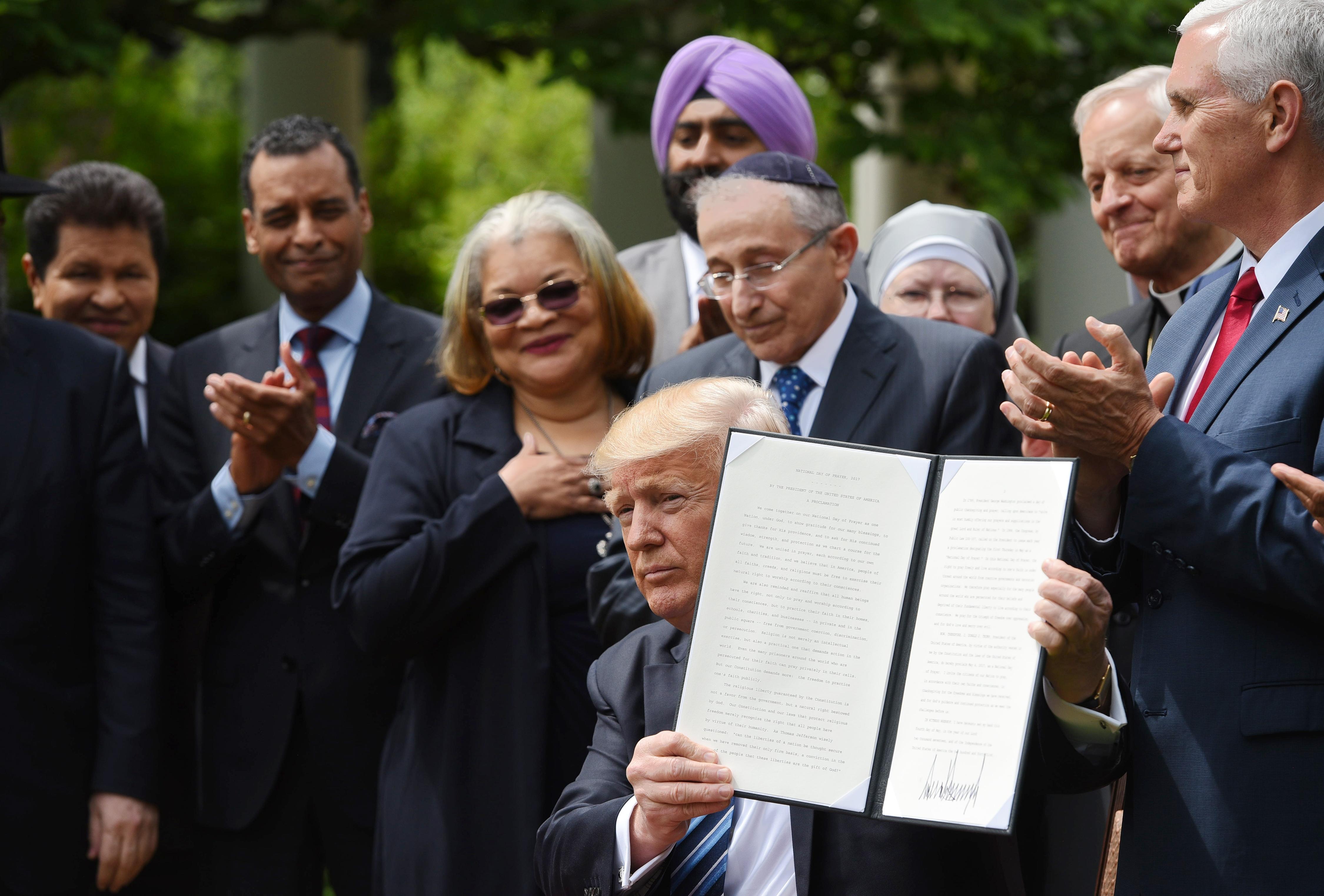 Commemorating the National Day of Prayer, President Trump signed an executive order he says will "defend freedom of religion and speech in America."

"It was looking like you'd never get here folks, but you got here," said Mr. Trump said in the Rose Garden Thursday, addressing members of various faith communities. He called it the first time such a religious statement has been made so publicly on the White House grounds.

"The Founding Fathers believed religious liberty was so fundamental they enshrined it in the first amendment in the constitution, yet for too long the Federal government has used the power of the state as a weapon against people of faith bullying and even punishing Americans for following their religious beliefs," said Mr. Trump.

"No American should be forced to choose between the dictates of the government and their faith," Mr. Trump added, "Freedom is not a gift from government. Freedom is a gift from God."

The president, surrounded by various faith leaders and Vice President Mike Pence, signed executive orders that would allow the IRS -- when IRS officials choose -- not to enforce the Johnson Amendment, which prohibits nonprofits such as churches and charities from "directly or indirectly" engaging in a political campaign. But the order doesn't provide blanket relief for tax-exempt religious organizations, opening the possibility that the IRS could pick and choose whom to penalize.

Mr. Trump called the Johnson Amendment "very unfair" and had promised on the campaign trail to "destroy" the amendment if he won.

"If I didn't win, I'd probably be out enjoying my life, but I wouldn't be helping you with the Johnson Amendment," joked the president with faith leaders.

According to a senior administration official, the entire White House team, including Mr. Trump's daughter Ivanka and her husband Jared Kushner, both observant orthodox Jews, worked on the executive order.

The order, which was based on one of Mr. Trump's campaign promises, would also provide regulatory relief from Obamacare requirements such as the requirement that organizations provide contraception care, which was heavily debated in the Little Sisters of the Poor case. Mr. Trump commended the nuns from the case for having "good lawyers."

Mr. Trump took a moment during the event to also formally announce his plans to travel to the Middle East, where he is expected to travel to Saudi Arabia to hold talks with Muslim leaders in an effort to help "combat terrorism and violence and to embrace a more just and hopeful future for young Muslims in their countries."

"Our task is not to dictate to others how to live but to build a coalition of friends and partners" to fight terrorism, and to "bring stability to the war ravaged Middle East," added the president.

Mr. Trump will continue his overseas visit to Israel and then to Rome shortly thereafter, ahead of the NATO and G7 meetings.

The president also promised to direct the Department of Justice to develop new rules to establish religious protections are afforded to all Americans.

"Under my administration, free speech does not end at the steps of a cathedral or synagogue, we are giving our churches their voices back, with this order, we will also make clear that the federal government will never penalize any person for their protected religious beliefs," said Mr. Trump.

In a statement issued following Mr. Trump's remarks, the ACLU announced their intentions to file a lawsuit in response to the executive order.

"The actions taken today are a broadside to our country's long-standing commitment to the separation of church and state. Whether by executive order or through backroom deals, it's clear that the Trump administration and Congressional leadership are using religion as a wedge to further divide the country and permit discrimination," said American Civil Liberties Union Executive Director Anthony D. Romer in a statement.

The statement went on to say "President Trump's efforts to promote religious freedom are thinly-veiled efforts to unleash his conservative religious base into the political arena while also using religion to discriminate. It's a dual dose of pandering to a base and denying reproductive care. We will see Trump in court, again."