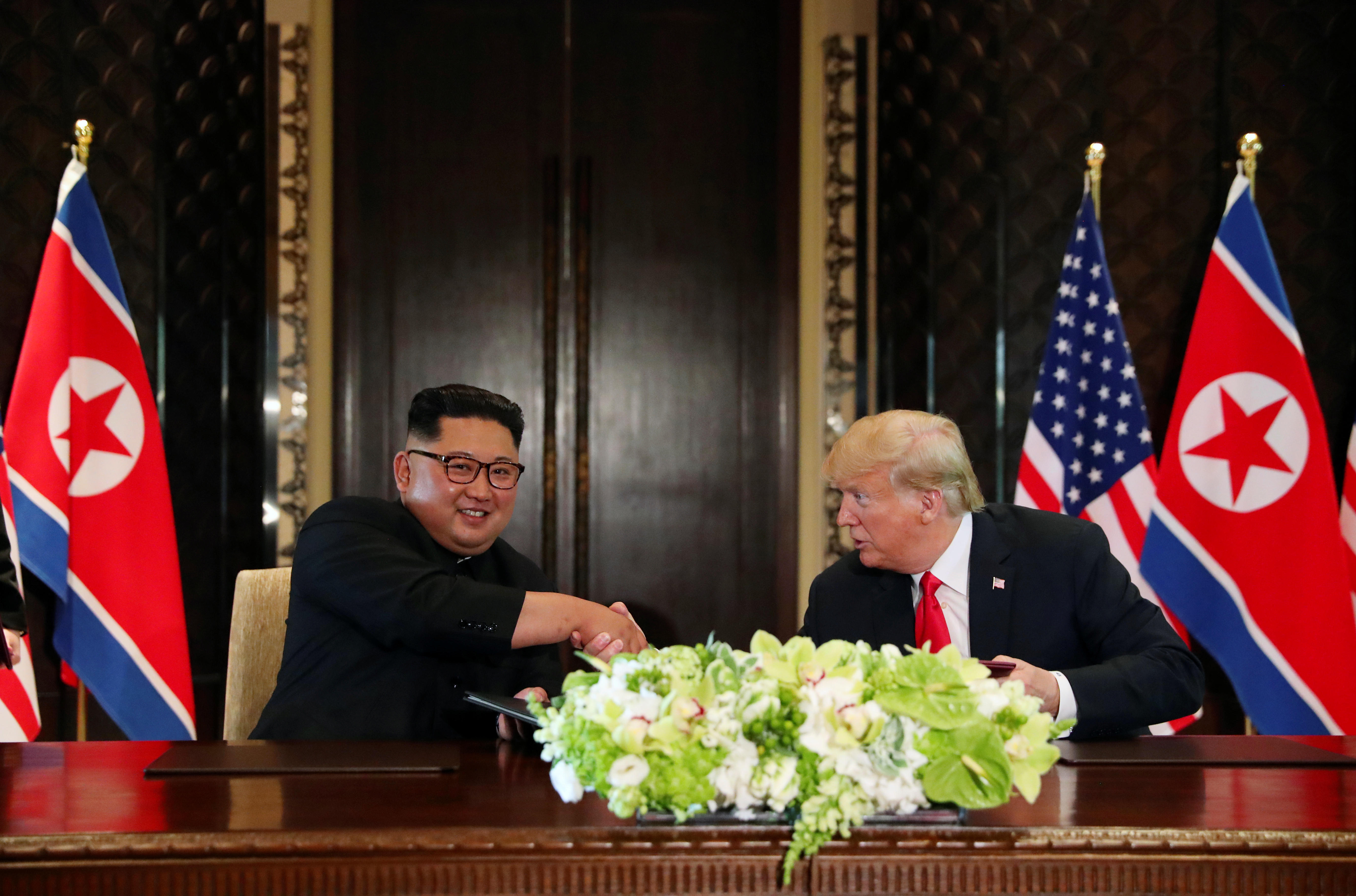 The White House aired a movie trailer depicting the possibilities ahead for U.S.-North Korea relations to set up the president's press conference in Singapore following his summit with North Korean leader Kim Jong Un.

"Seven billion people inhabit planet Earth," the voiceover began. "Of those alive today, only a small number will leave a lasting impact. And only the very few will make decision or take actions that renew their homeland and change the course of history."

At this point during the summit, Mr. Trump and North Korean leader Kim Jong Un had already greeted each other, engaged in a one-on-one meeting and another with their top advisers, as well as a working lunch. Before Mr. Trump entered the room full of reporters for the news conference, journalists were shown the four-minute preview on a screen.

"Out of the darkness can come the light. And the light of hope can burn bright," the video narration says.

The video features multiple quick cuts of Mr. Trump and Kim interspersed with a montage of stock image shots: the Egyptian pyramids and Machu Picchu. An orchestra. A basketball player hitting a slam dunk. A team of white horses galloping across a sea. Sky lanterns released into the night sky.

The movie trailer voiceover intones, "Destiny Pictures presents a story of opportunity: a new story. A new beginning. One of peace. Two men. Two leaders. One destiny. A story about a special moment in time..."

Placing Kim in the "movie" as the protagonist, it continued, "When a man is presented with one chance that may never be repeated, what will he choose? To show vision and leadership? Or not."

To start the short film off, a title card flashes at the beginning of the piece reading, "A Destiny Pictures production." However, the Los Angeles-based production company's founder and producer Mark Castaldo confirmed in a phone call to CBS News that he had "absolutely nothing to do with this."

"We had nothing to do with that video at all," Castaldo said. "I've been up since 6:00 in the morning, inundated with emails and hundreds of phone calls about this."

The White House did not respond to three inquiries about the video, but considering the WH.gov logo superimposed over the video's top right corner, it was likely administration-produced.

"My instinct would be that whoever made that video just metaphorically put that in there," Castaldo said, referring to the credit. "Something like a 'forward-looking, what's the future' type thing."

Mr. Trump referred to the video as "the future" or "what could take place" and said that Kim "really enjoyed it" when he viewed the footage on an iPad during their meeting.

"That was a tape that we gave to Chairman Kim and his people, his representatives," Mr. Trump said in the press conference. "And it captures a lot.  It captures what could be done. And that's a great -- a great place. It has the potential to be an incredible place."

On Tuesday evening, the national security council admitted that it had put together the trailer. "The video was created by the NSC to help the President demonstrate the benefits of complete denuclearization, and a vision of a peaceful and prosperous Korean Peninsula," NSC spokesman Garrett Marquis told CBS News in a statement.