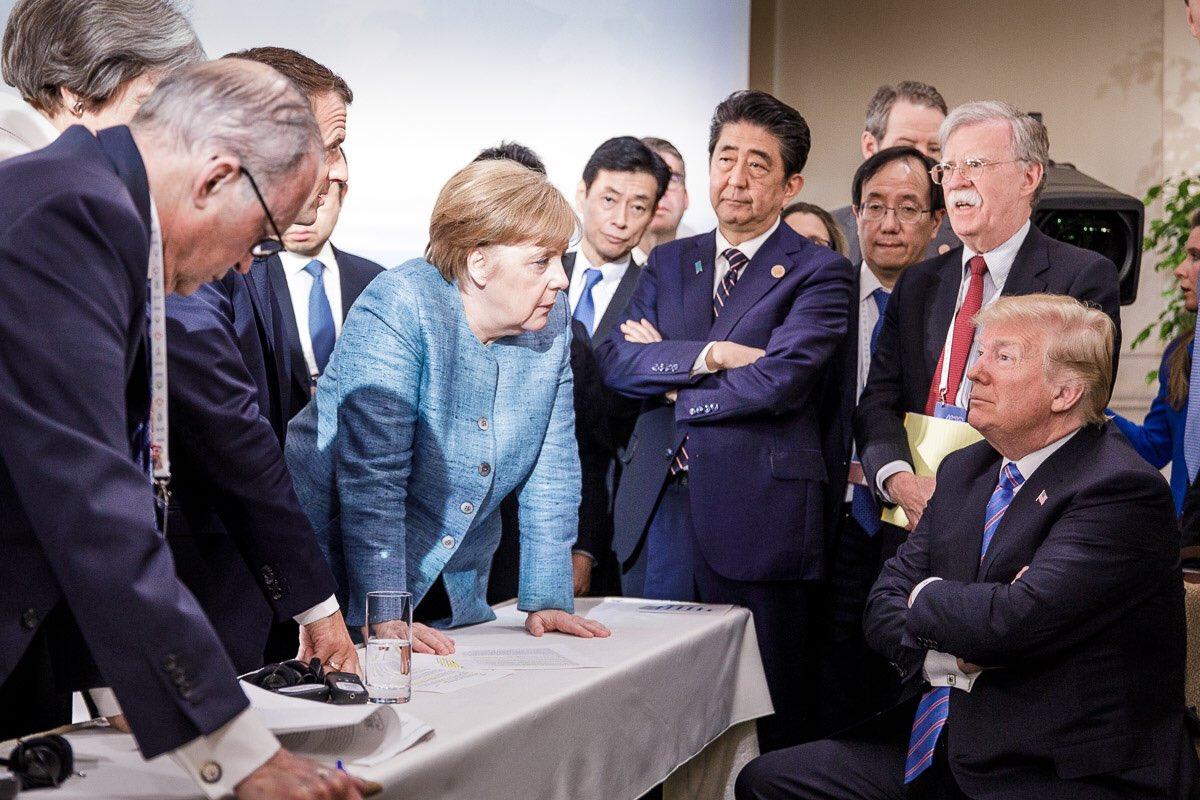 The G7 photo that went viral Saturday appeared to say 1,000 words: President Trump, sitting with his arms crossed, with German Chancellor Angela Merkel facing him, leaning forward and surrounded by other leaders. Released by the German federal government, it contrasted heavily with the official White House photos that showed more conciliatory photos of Mr. Trump and the other world leaders.

The photo from Merkel's office went viral Saturday before Mr. Trump retracted his earlier signing of the final statement. Mr. Trump tweeted that after "false statements" from Prime Minister Justin Trudeau, he had instructed his representatives "not to endorse" the final communique.

In a press conference after Mr. Trump left, Trudeau said retaliatory tariffs will go into effect July 1. "Canadians, we're polite, we're reasonable, but we also will not be pushed around," Trudeau said.

Trudeau, though, does not appear to be in the German photo, perhaps showing other tensions during the summit. Aside from Merkel, the other leaders are Japanese Prime Minister Shinzo Abe, Japanese deputy chief cabinet secretary Yasutoshi Nishimura, French president Emmanuel Macron and British Prime Minister Theresa May. Also pictured are U.S. national security adviser John Bolton and Larry Kudlow, director of the US National Economic Council.

Another photo that received considerable attention featured Mr. Trump arriving late to the Gender Equality Advisory Council breakfast Saturday morning. In the photo, IMF managing director Christine Lagarde and Merkel are staring at Mr. Trump as he walked in.

According to the pool report, Mr. Trump arrived late to the breakfast, with Trudeau saying in his opening remarks "any stragglers will come in as they arrive."

Security personnel had to open a path for Mr. Trump through a throng of journalists and cameramen. The camera clicks for Mr. Trump almost drowned out Hudon.

Macron stared at Mr. Trump after he sat down.

The seven leaders posed Friday for a friendly photo showing Charlevoix's mountains in the background.

The photos also contrast from the viral photo from the 2015 G7 summit, when former President Obama was still president. That summit's viral photo showed Obama seated while Merkel spoke with her arms outstretched, surrounded by the picturesque German Alps in Bavaria.