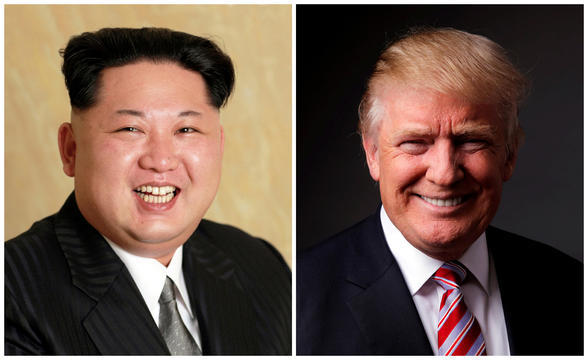 "I will be meeting with Kim Jong Un in the coming weeks, we look forward to that," Mr. Trump said during a news conference with German Chancellor Angela Merkel. "We're down to two countries as to a site, and we'll let you know what that site is."

Mr. Trump declined to say whether he has met with Kim directly. But he did say they have a "good working relationship."

"I don't want to comment on that but we have a very good working relationship," Mr. Trump said. "We're setting up a meeting. Things have changed very radically from a few months ago. You know the name calling and a lot of other things. We get a kick every once in a while out of the fact that I'll be watching people that failed so badly over the last 25 years explaining to me how to make a deal with North Korea, I get a big, big kick out of that."

The North Korean leader and South Korean President Moon Jae-in held a historic meeting Friday, with Kim becoming the first member of his family to cross the Demilitarized Zone (DMZ) since the Korean War armistice in 1953. The two Koreas agreed to get rid of their nuclear weapons, but they did not offer any details about how they will achieve this.

On Saturday, Mr. Trump tweeted: "Just had a long and very good talk with President Moon of South Korea. Things are going very well, time and location of meeting with North Korea is being set."

He also said he spoke Japanese Prime Minister Shinzo Abe "to inform him of the ongoing negotiations."