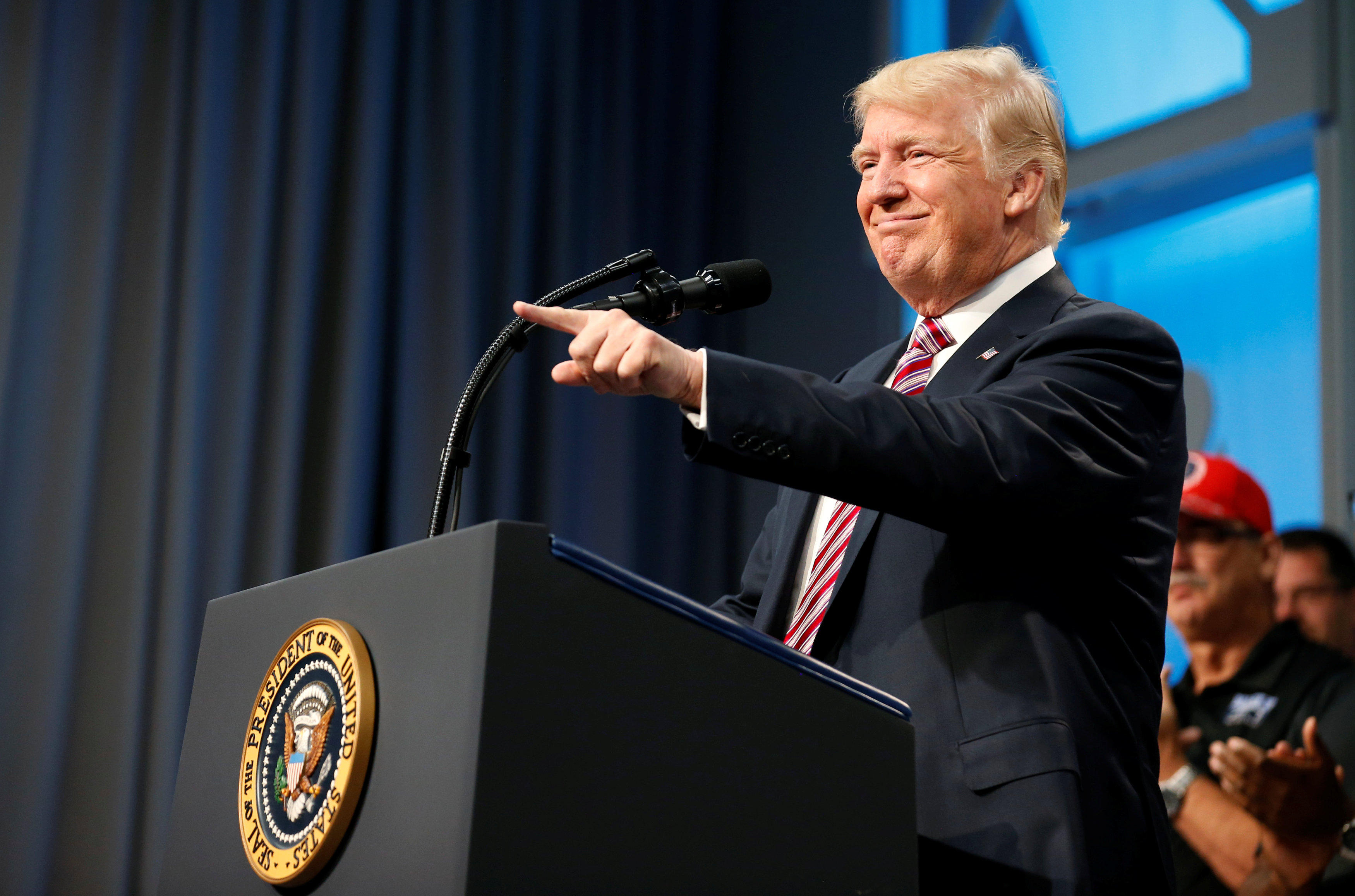 President Trump's speech to the National Association of Manufacturers Friday went slightly off track before it had really begun.

The president took to the stage, offering his thoughts on Puerto Rico, and assuring people that "all appropriate departments of our government from homeland security to defense are engaged" in the efforts there, as people lack basic necessities like water. But the president described the already-in-debt "island" as unprepared for the wrath of Hurricane Maria. The president said Puerto Rico is a difficult thing to tackle because it's an island.

"This is an island, surrounded by water, big water, ocean water," the president said.

The local government in Puerto Rico, the president said, was "totally and, unfortunately, unable to handle this catastrophic crisis"  alone, and the U.S. is having to send truck drivers because the truck drivers there are taking care of their families. Puerto Rico — a U.S. territory — will have to "work with us to determine how" to fund and organize rebuilding efforts, since the territory is "already" in debt, he said.

"Ultimately, the government of Puerto Rico will have to work with us to determine how this massive rebuilding effort — it will end up being one of the biggest ever — will be funded and organized, and what we will do with the tremendous amount of existing debt already on the island," the president said.

"We will not rest, however, until the people of Puerto Rico are safe," he continued. "These are great people. We want them to be safe, and sound, and secure, and we will be there every day until that happens."

Mr. Trump later said the U.S. economy will take a "little bit of a hit" from the recent hurricanes — Hurricane Irma, Hurricane Harvey and Hurricane Maria, although he still believes the quarter will finish strong.

But the president did launch into his proposed tax plan, which his administration announced on Wednesday.

"At the very center of that plan, is a giant, beautiful, biggest-ever-in-our-country tax cut," he said.

The president emphasized his plan replaces "confusion with total clarity," and will mean the "vast majority of families will be able to file their taxes on a single sheet of paper." The president said his plan will act as "rocket fuel" for the American economy, as it incentivizes companies overseas back to the U.S. His new plan tops out taxes for most businesses at 25 percent, and at 20 percent for corporations. Mr. Trump also touted the proposed repeal of the Alternative Minimum Tax, a tax on the wealthy that forced him to pay $31 million in taxes in 2005.

"This can be remembered as the moment we took control of our destiny and chose a future of American patriotism," the president said to conclude his speech.

NAM is supporting the president's plan.

"Manufacturers in America have never been as enthusiastic or as optimistic about their future as they are this year, and that is because of the huge opportunity we have to get tax reform done," Jay Timmons, NAM's president and CEO.

But it's unclear how the president's plan, which needs to be fleshed out by the tax-writing committees in Congress, will fare there. Retiring Sen. Bob Corker, R-Tennessee, said he thinks tax reform will make health care look like a "piece of cake."