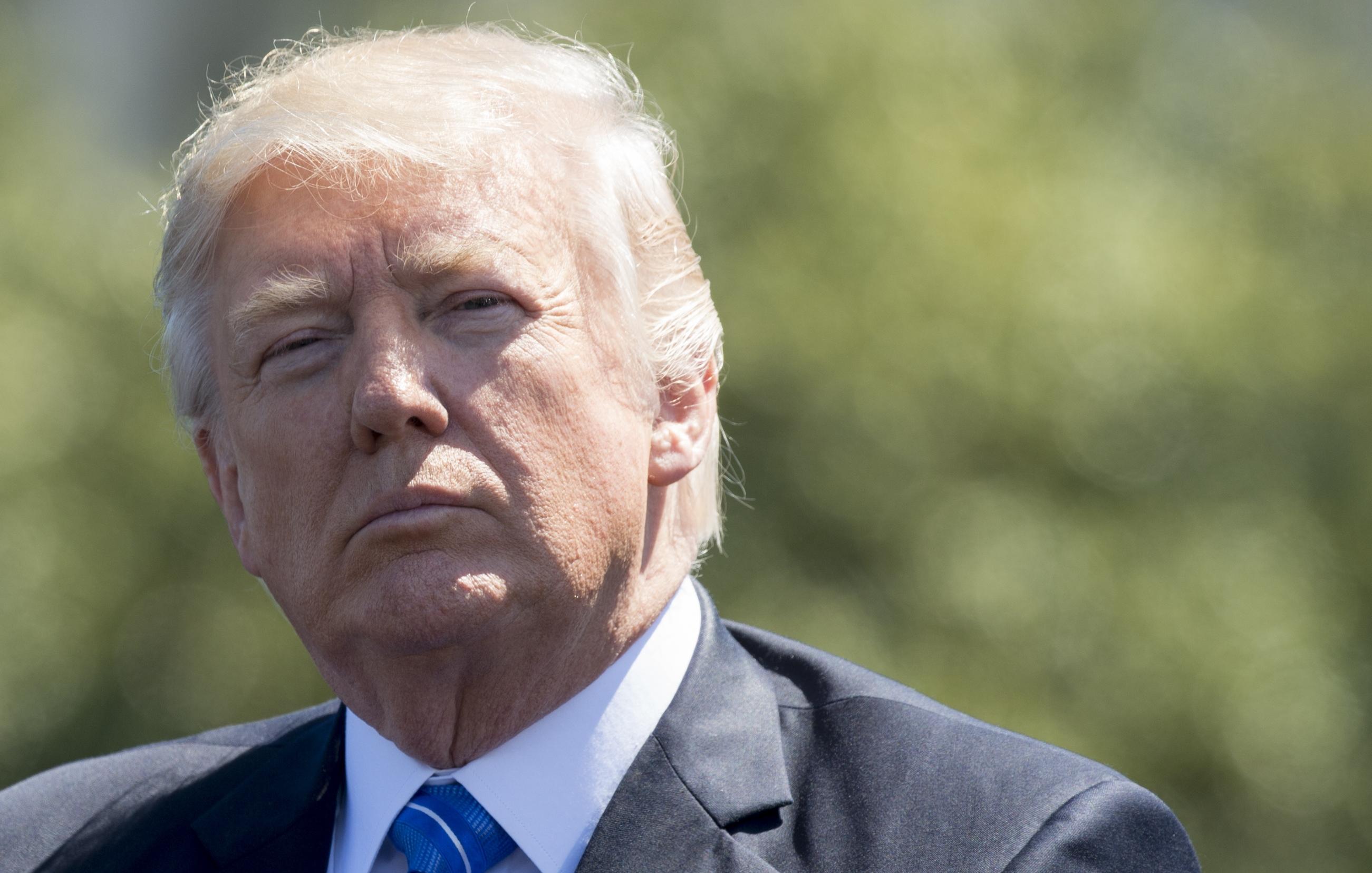 WASHINGTON -- The president left for his first foreign trip, a nine-day trip to the Middle East and Europe, with Saudi Arabia the first stop.

The president was accompanied on Air Force One by his wife, Melania, daughter Ivanka and son-in-law and top adviser Jared Kushner. Chief of staff Reince Priebus, top economic adviser Gary Cohn and and director of social media Dan Scavino are also on the president's plane.

If President Trump hoped domestic turmoil would be calmed by the time he departed, that was not to be the case.

Combative and complaining, Mr. Trump fell short Thursday in trying to resolve investigations into his campaign and his first four months in office. He departed for Saudi Arabia having fervently denied that his campaign had collaborated with Russia or that he'd tried to kill an FBI probe of the issue - and he claimed to be the most hounded president in history. Even his enemies, the president declared, recognize his innocence.

Asked point-blank if he'd done anything that might merit prosecution or even impeachment, Mr. Trump said no - and then added of the lingering allegations and questions: "I think it's totally ridiculous. Everybody thinks so."

While President Trump was at the White House tweeting and voicing his indignation, Deputy Attorney General Rod Rosenstein, who appointed a special counsel to lead an independent federal Trump-Russia investigation, briefed the entire Senate in private. By several senators' accounts, he contradicted Mr. Trump's statements that Rosenstein's written criticism of FBI Director James Comey had been a factor in Comey's recent firing by the president.

Rosenstein was returning to the Capitol on Friday for another closed-door session, this time with all members of the House.

The president embarked Friday on his first foreign trip, to the Mideast and beyond, and aides had hoped the disarray at home would be calmed -- if not resolved -- by the time his plane took off. Republicans on Capitol Hill hoped the same, reasoning that the appointment of a special counsel could free them to work on a major tax overhaul - and other matters - without constant distractions.

Mr. Trump had said he was about to name a replacement for Comey, another effort to settle the waters. Former Connecticut Sen. Joe Lieberman was seen as the front-runner, although the president left on his foreign trip withough having announced his pick for FBI director.

The president clearly knew what he wanted to say as he took a few questions at a news briefing with visiting Colombian President Juan Manuel Santos.

Did he urge Comey at a February meeting to drop his probe of the Russia connections of former national security adviser, Michael Flynn?

Did he collude with Russia in his campaign to defeat Democrat Hillary Clinton?

"Everybody, even my enemies, have said there is no collusion," he replied.

Another answer on that subject seemed both more specific and perhaps ambiguous.

"There is no collusion between certainly myself and my campaign - but I can only speak for myself - and the Russians. Zero."

"The entire thing has been a witch hunt," he declared, echoing one of the tweets he'd sent out just after dawn: "This is the single greatest witch hunt of a politician in American history!"

He said he respected the special counsel appointment but also said it "hurts our country terribly."

Across town, Rosenstein was briefing the Senate about his decision to appoint former FBI Director Robert Mueller to lead the independent Trump-Russia probe.

Senators said that Rosenstein steered clear of specifics while making clear that Mueller has wide latitude to pursue the investigation wherever it leads, potentially including criminal charges. Despite the president's furious reaction, some fellow Republicans welcomed Mueller's appointment and expressed hopes it would restore some composure to a capital plunged in chaos.

"We'll get rid of the smoke and see where the actual issues lie," said Sen. Tim Scott, R-S.C. "I do think that the special prosecutor provides a sense of calm and confidence perhaps for the American people, which is incredibly important."

One striking piece of news emerged from Rosenstein's briefing: He told senators that he had already known Comey was getting fired even as he wrote the memo that Mr. Trump cited as a significant justification for the FBI director's dismissal. The president himself had already contradicted that explanation, telling interviewers earlier that he had already decided to dismiss Comey.

He offered new justifications for his decision Thursday, even while referring to the Rosenstein memo as "a very, very strong recommendation."

Mr. Trump referred to Comey's testimony at a recent Capitol Hill hearing, after which the Justice Department ended up having to amend part of his testimony regarding last year's probe of Hillary Clinton's email practices.

"That was a poor, poor performance," Mr. Trump said. "And then on top of that, after the Wednesday performance by Director Comey, you had a person come and have to readjust the record, which many people have never seen before, because there were misstatements made."

The Justice Department says Mueller, the new special counsel, has been given sweeping power to investigate Russian interference in the 2016 presidential campaign, including potential links between Moscow and Trump associates.

Despite initially opposing appointment of an independent counsel, Republican House Speaker Paul Ryan said Thursday that the development "helps assure people and the Justice Department that they're going to go do their jobs independently and thoroughly, which is what we've called for all along."