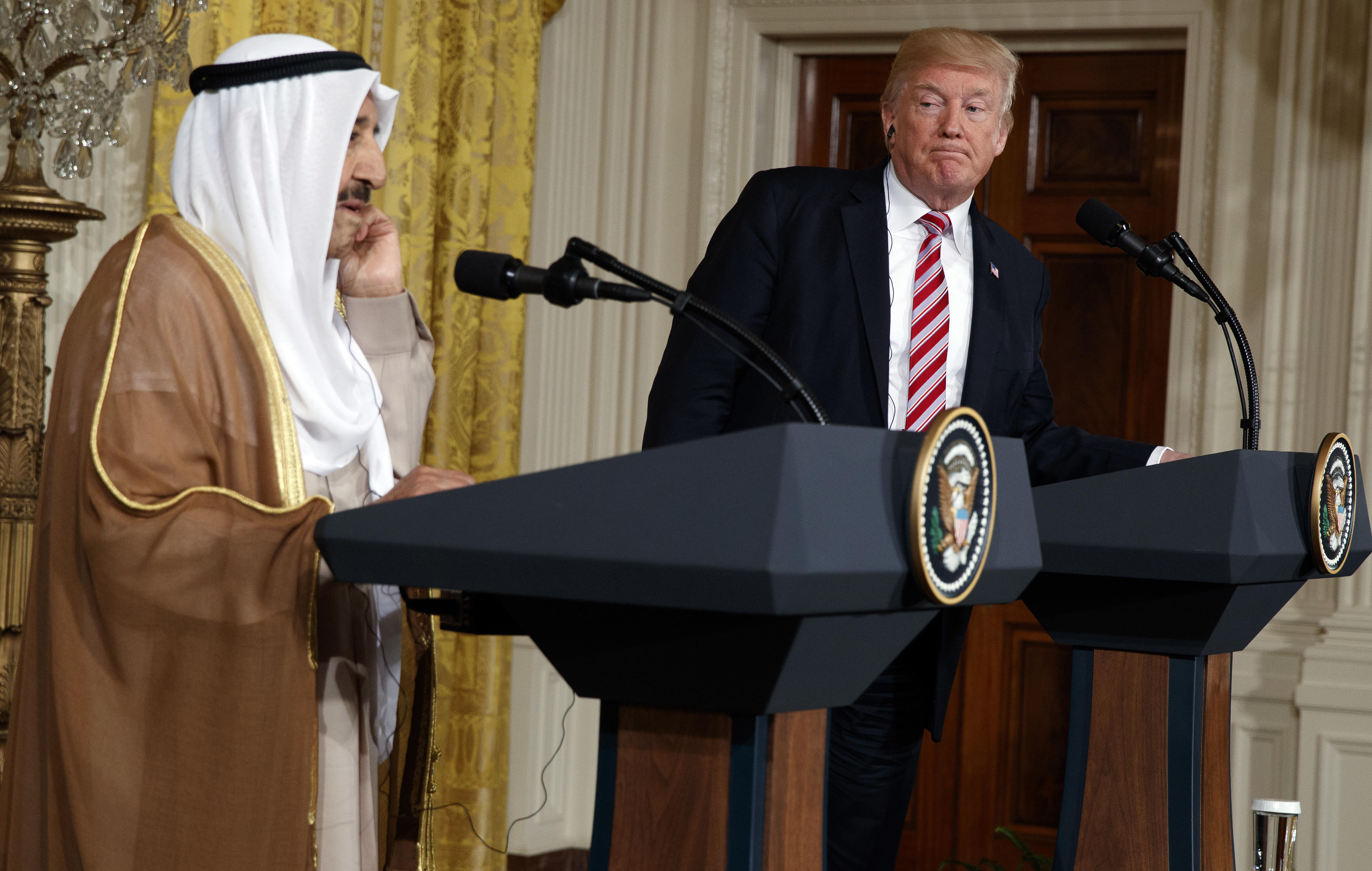 In a joint news conference from the White House with Kuwaiti Emir Sheikh Sabah al-Ahmad al-Jaber al-Sabah on Thursday afternoon, President Trump did not rule out a military response to North Korea's provocations.

"Military action would certainly be an option," Mr. Trump said in response to a question from CBS News's Major Garrett. "Is it inevitable? Nothing is inevitable."

Tensions between the United States and North Korean leader Kim Jong Un's regime have been rising over the North's nuclear testing and missile launches.

"I can tell you that North Korea is behaving badly and it's got to stop," Mr. Trump said.

While the president said he "would prefer not going the route of the military," his administration has threatened to impose increased U.S. sanctions on nations who interact with North Korea.

Should the U.S. respond to the regime with military action, "It would be a very sad day in North Korea," Mr. Trump said.

The president also thanked Kuwait for its leadership and help in fighting ISIS and other terrorist groups.

Mr. Trump also offered to intercede, should Kuwait reach an impasse in its attempts to mediate between other Gulf states and Qatar, which has been blockaded over its support for extremist groups and close ties with Iran.

"I would be willing to do so and I think you'd have a deal worked out very quickly," Mr. Trump said of potential U.S. mediation between Qatar and its Arab neighbors.

But al-Sabah said he is "optimistic that a solution will come in the very near future."

"First of all I would like to say there is no problem that cannot be resolved. True, it's complicated," al-Sabah said of the Gulf region's relationship with Qatar. "What is important is that we have stopped any military action," he later added.

Al-Sabah: "there is no problem that cannot be resolved"

"First of all I would like to say there is no problem that cannot be resolved. True, it's complicated," the emir said of the Gulf region's relationship with Qatar. He said that Qatar should "join its brothers in the GCC."

"What is important is that we have stopped any military action," al-Sabah said.

Trump: U.S. will "stop the funding of terrorism"

The president called a potential two-state solution "the world's most complex and difficult deal," but expressed hope for peace in the region.

"As far as Syria is concerned, we have very little to do with Syria other than killing ISIS," Mr. Trump said, claiming that in the eight months of his presidency, his administration has been more effective in combatting ISIS than the Obama administration.

Trump thanks Kuwait for mediation, says he is willing for U.S. to mediate

"I would be willing to do so and I think you'd have a deal worked out very quickly," Mr. Trump said of potential U.S. mediation between Qatar and its Arab neighbors.

Al-Sabah hopes for diplomatic resolution to conflicts with Qatar

"I am optimistic that a solution will come in the very near future, god willing," the emir said.

Trump is asked about North Korea by CBS'S Major Garrett

"I would prefer not going the route of the military," he said adding that it's something that "certainly could happen."

"I can tell you that North Korea is behaving badly and it's got to stop," Mr. Trump said.

"We stand by our friends in the U.S.," al-Sabah said, acknowledging the common efforts shared by Kuwait and the United States in ending the sources of funding for terrorism and combatting radical ideology.

The emir praised the Trump administration's efforts in addressing the Israeli-Palestinian conflict diplomatically.

"We are deeply affected by the human losses," al-Sabah said. After offering his thoughts and prayers, he expressed hope for the people to be affected by the impending Hurricane Irma.

"We send a strong message to both terrorist organizations and regional aggressors that they cannot win," Mr. Trump said.

Mr. Trump welcomed the Emir to the White House and thanked him for Kuwait's humanitarian efforts and their contributions in the fight against ISIS.

"Each nation in the region must decide what kind of future they want for their children," Mr. Trump said, addressing other Arab nations' efforts in fighting against ISIS and radical ideology.

Before conference, Trump says eliminating the debt ceiling "could be discussed"

Joined by Vice President Mike Pence and several members of his cabinet, when asked if he would be open to eliminating the debt ceiling, Mr. Trump responded that "it could be discussed" and "there are a lot of good reasons to do that."

"We have a great respect for the sanctity of the debt ceiling. Chuck does and Nancy does and we all do," the president said of House Minority Leader Nancy Pelosi and Senate Minority Leader Chuck Schumer.  "So that will never be a problem."

Mr. Trump also commented on Hurricane Irma's trajectory, saying "to the people of Florida: we just want you to protect yourselves."