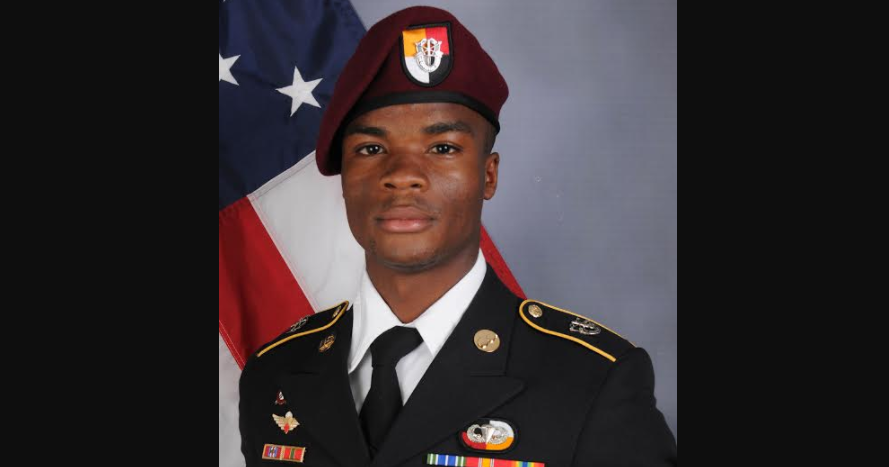 WASHINGTON -- The aunt of an Army sergeant killed in Niger said Wednesday that President Trump, in a call offering condolences, showed "disrespect" to the soldier's loved ones as they drove to the airport to meet his body. Mr. Trump, engulfed in controversy over the appropriate way for presidents to show compassion for slain soldiers, strongly disputed that account.

Sgt. La David Johnson was one of four American military personnel killed nearly two weeks ago whose families had not heard from Mr. Trump until Tuesday. Rep. Frederica Wilson said that Mr. Trump told the widow that Johnson "knew what he was getting into."

The Florida Democrat said she was in the car with the widow, Myeshia Johnson, on the way to Miami International Airport to meet the body when Mr. Trump called. La David Johnson's aunt, Cowanda Jones-Johnson, who raised him, told the Associated Press Wednesday that the congresswoman's account was correct.

That's simply not so, Mr. Trump said Wednesday. He declared on Twitter: "Democrat Congresswoman totally fabricated what I said to the wife of a soldier who died in action (and I have proof). Sad!"

And in a White House meeting on tax reform, Mr. Trump said that he "didn't say what that congresswoman said, didn't say it at all. She knows it."

Wilson did not back down from her account, suggesting that Mr. Trump "never wants to take ownership" of a mistake.

"If you are the leader of the free world, if you are president of the United States and you want to convey sympathy to a grieving family, a grieving widow, you choose your words carefully," Wilson told the Associated Press Wednesday. "And everyone knows that Donald Trump does not choose his words carefully."

"She was crying for the whole time," Wilson said of the new widow. "And the worst part of it: when he hung up, you know what she turned to me and said? She said he didn't even remember his name."

Like presidents before him, Mr. Trump has made personal contact with some families of the fallen but not all. What's different is that Mr. Trump, alone among them, has picked a political fight over who's done better to honor the war dead and their families.

He placed himself at the top of the list, saying on Tuesday, "I think I've called every family of someone who's died" while past presidents didn't place such calls.

But the Associated Press found relatives of two soldiers who died overseas during Mr. Trump's presidency who said they never received a call or a letter from him, as well as relatives of a third who did not get a call. And proof is plentiful that Barack Obama and George W. Bush -- saddled with far more combat casualties than the roughly two dozen so far under Mr. Trump, took painstaking steps to write, call or meet bereaved military families.

After her Army son died in an armored vehicle rollover in Syria in May, Sheila Murphy says, she got no call or letter from Mr. Trump, even as she waited months for his condolences and wrote him that "some days I don't want to live."

In contrast, Mr. Trump called to comfort Eddie and Aldene Lee about 10 days after their Army son was killed in an explosion while on patrol in Iraq in April. "Lovely young man," Mr. Trump said, according to Aldene. She thought that was a beautiful word to hear about her boy, "lovely."

Mr. Trump's delay in publicly discussing the men lost at Niger did not appear to be extraordinary, judging from past examples, but his politicization of the matter is. He went so far Tuesday as to cite the death of chief of staff John Kelly's son in Afghanistan to question whether Obama had properly honored the war dead.

Kelly was a Marine general under Obama when his Marine son Robert died in 2010. "You could ask General Kelly, did he get a call from Obama?" Mr. Trump said on Fox News radio.

A White House official said later that Obama did not call Kelly but did not respond to questions whether some other sort of outreach was made. Kelly, who was absent from a pair of public White House events on Tuesday, was sitting near the president in his tax reform meeting on Wednesday but did not address reporters.

Democrats and some former government officials were livid, accusing Mr. Trump of "inane cruelty" and a "sick game."

Democratic Sen. Tammy Duckworth of Illinois, an Iraq veteran who lost both legs when her helicopter was attacked, said: "I just wish that this commander in chief would stop using Gold Star families as pawns in whatever sick game he's trying to play here."

For their part, Gold Star families, which have lost members in wartime, told AP of acts of intimate kindness from Obama and Bush when those commanders in chief consoled them.

Mr. Trump initially claimed that only he among presidents made sure to call families. Obama may have done so on occasion, he said, but "other presidents did not call."

He equivocated Tuesday as the record made plain that his characterization was false. "I don't know," he said of past calls. But he said his own practice was to call all families of the war dead.

But that hasn't happened.

No White House protocol demands that presidents speak or meet with the families of Americans killed in action -- an impossible task in a war's bloodiest stages. But they often do.

Altogether some 6,900 Americans have been killed in overseas wars since the Sept. 11, 2001, attacks, the overwhelming majority under Bush and Obama.

Despite the much heavier toll on his watch -- more than 800 dead each year from 2004 through 2007 -- Bush wrote to all bereaved military families and met or spoke with hundreds if not thousands, said his spokesman, Freddy Ford.

Veterans groups said they had no quarrel with how presidents have recognized the fallen or their families.

"I don't think there is any president I know of who hasn't called families," said Rick Weidman, co-founder and executive director of Vietnam Veterans of America. "President Obama called often and President Bush called often. They also made regular visits to Walter Reed and Bethesda Medical Center, going in the evenings and on Saturdays."

Mr. Trump feuded with one Gold Star family during last year's campaign, assailing the parents of slain Army Capt. Humayun Khan, who died in Iraq in 2004, after they criticized him from the stage at the Democratic National Convention.