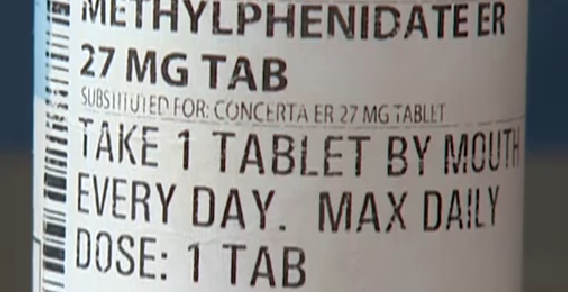 17-year-old Emily Hingle was doing well managing her Attention Deficit Disorder (ADD) with the help of a doctor's prescription, when something seemed to change.

"One teacher in particular like told me that I had 'senioritis' and that I was slacking, but I knew that I was not, like, doing this on purpose," Emily said.

The drug she was taking to help her focus, a generic form of the drug Concerta (a long-acting version of Ritalin) didn't seem to be working as effectively as it should have. The drugs are commonly prescribed for young people with ADD and Attention Deficit Hyperactivity Disorder (ADHD).

Emily wasn't alone. In November, the Food and Drug Administration announced it had concerns about whether two approved generic versions of Concerta were in fact "therapeutically equivalent" to the name-brand drug.

"Two of these generics, so to speak, were not exactly providing the same rate and extent of absorption of medicine that Concerta had," explained Dr. Andrew Adesman of the Steven and Alexandra Cohen Children's Medical Center in New York.

In some patients, the FDA found generics manufactured by Mallinckrodt and Kudco may deliver their dosage at a slower rate, lowering effectiveness.

The FDA said the generics have no serious safety issues and can still be prescribed, but they are no longer recommended as an automatic substitute for Concerta, since they may not work as effectively.

The manufacturers were given six months to prove their drugs work as well as they should or take them off the market.

The FDA noted that another version of the drug, an "authorized generic" made by Concerta's manufacturer, Janssen, and marketed by Actavis, had no such problems. Patients can ask their pharmacist if they're not sure who manufactured their particular drug.

Emily switched to a new medication that she says is working for her. "It was like a weight had been taken off my shoulders," she said. Her grades are back up, and she'll be heading to college next fall.