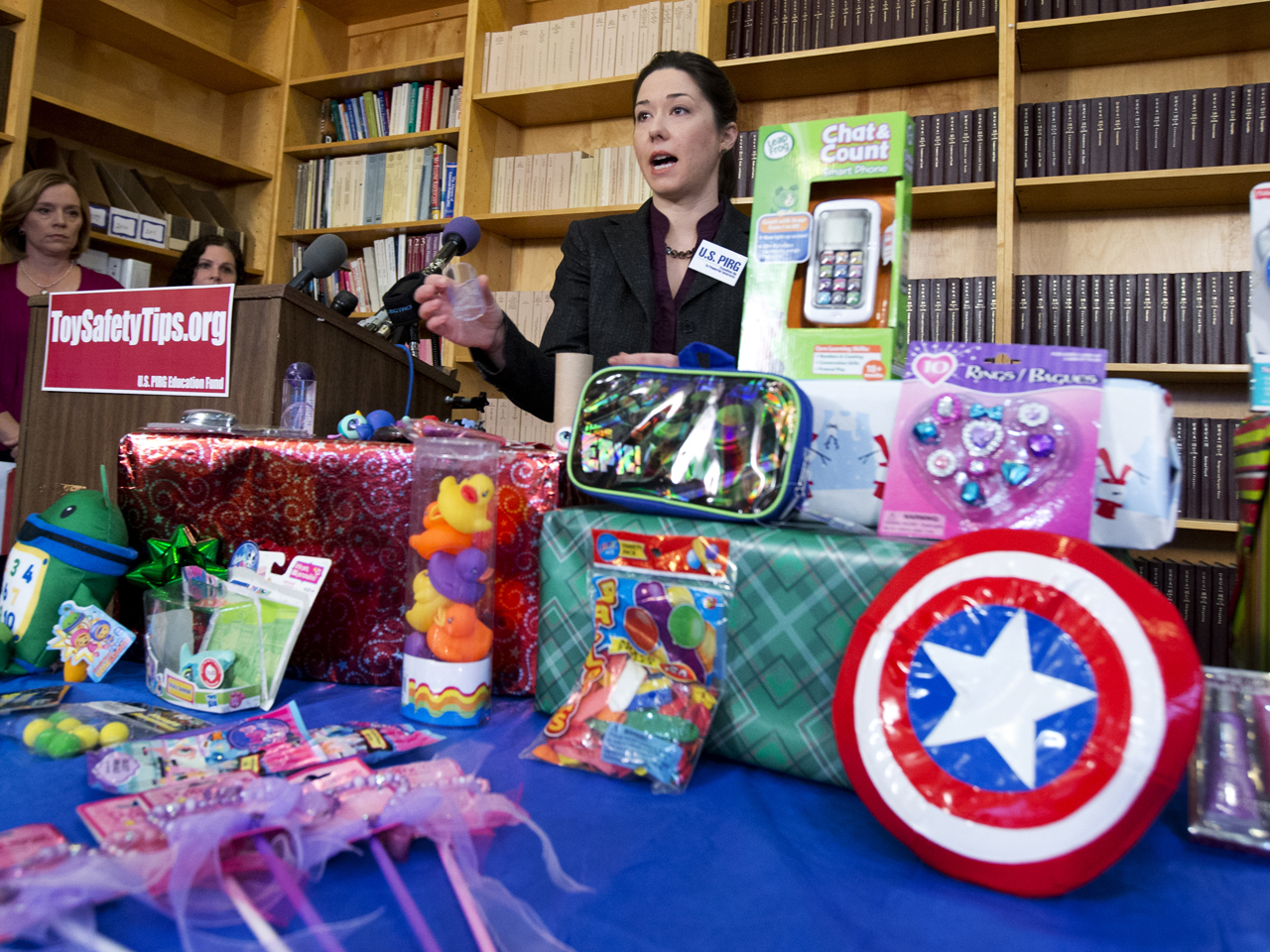 As you purchase gifts for young loved ones this Christmas, be mindful of potentially dangerous toys that may harm their health.

The U.S. Public Interest Research Group (PIRG) released its 28th annual toy safety report, titled “Trouble in Toyland," to alert parents which toys might be unsafe. The nonprofit group tests various toys and games looking for levels of potentially-toxic chemicals and other risks like choking and strangulation hazards.

“We should be able to trust that the toys we buy are safe. However, until that’s the case, parents need to watch out for common hazards when shopping for toys,” Jenny Levin, U.S. PIRG Public Health Advocate, said in a press release.

The 2013 report revealed that many toys still contain high levels of toxins, especially lead, a neurotoxin that's been linked to developmental health effects. One toy intended for toddlers, the Captain America Soft Shield, had 29 times the legal limit of lead, for example. The U.S. government currently limits led content to 100 parts per million (ppm), while the American Academy of Pediatrics recommends a lower limit of 40 ppm.

The Captain America toy contained 2,900 ppm of lead, according to the report.

The toy's manufacturer, Disguise Inc., said PIRG's claims were false. "The Captain America Shield from Disguise meets all applicable health and safety regulations and Disguise has test reports that show the inaccuracy of the statements made by PIRG," the company said in a statement.

PIRG said its researchers also found toxins including phthalates (found in plastics) and metals like antimony and cadmium in some children’s products. One toy found by the group, the Ninja Turtles Pencil Case, contained 150,000 ppm of one of six phthalates banned from toys, and 600 ppm of cadmium.

The Food and Drug Administration (FDA) says that the effects of phthalates on human health have not been determined. However, studies have linked phthalates to increased insulin resistance in teens, a condition in which the body doesn’t use the hormone insulin to process sugars, raising the risk for Type 2 diabetes. Phthalates in nail polishes and hairsprays have been associated with a heightened diabetes risk for women. There has also been a connection between the chemicals and obesity in African-American children.

Some toys intended for children under 3 were found to have small parts or “near small parts” that could be swallowed. Items included rounded toy foods that could be dangerous, especially because the child may assume it is something they can eat. U.S. PIRG pointed out that between 2001 and 2012, more than 90 children have died due to choking episodes.

Another risk the group found were toys containing small magnets. An August study in the Annals of Emergency Medicine found that there was a five times increase in cases of children swallowing magnets between 2002 and 2011. Toys made with neodymium iron boron magnets could be swallowed and cause internal damage to a child, such as ripping holes through the intestines. One of the popular examples of one such toy is Buckyballs, a magnetic desk ornament made of tiny balls that can be shaped into various figures. Government officials filed a complaint against the company in July 2012 to halt all sales due to increased reports of kids swallowing the product.

The new report found Buckyballs and similar toys are still being sold online.

Other toys were flagged by U.S. PIRG for excessive noise levels that could damage a child’s hearing according to the standards set by the National Institute of Deafness and Other Communication Disorders. It is recommended that prolonged noise not reach above 85 decibels in any age range, and toys held close to the ear should not be over 65 decibels. Toys like the Chat & Count Smart Phone were measured at higher than 85 decibels.

The National Health and Nutrition Examination Survey showed that one in five U.S. children will have some degree of hearing loss by the time they reach 12 years of age.

Patty Davis, a spokesperson for the Consumer Product Safety Commission, said in a press release that nearly 10 million units of toys that have been deemed unsafe have been seized over the last five years. Still, much more needs to be done by government officials and consumers to protect children from these hazards.

“Our leaders and consumer watchdogs need to do more to protect America’s kids from the hazards of unsafe toys –- no child should ever be injured, get sick, or die from playing with a dangerous toy,” Levin said. “Standards for toxic chemicals like lead, cadmium, and phthalates remain too weak to protect kids from potentially dangerous exposures.”

The full "Trouble in Toyland" report can be accessed here.