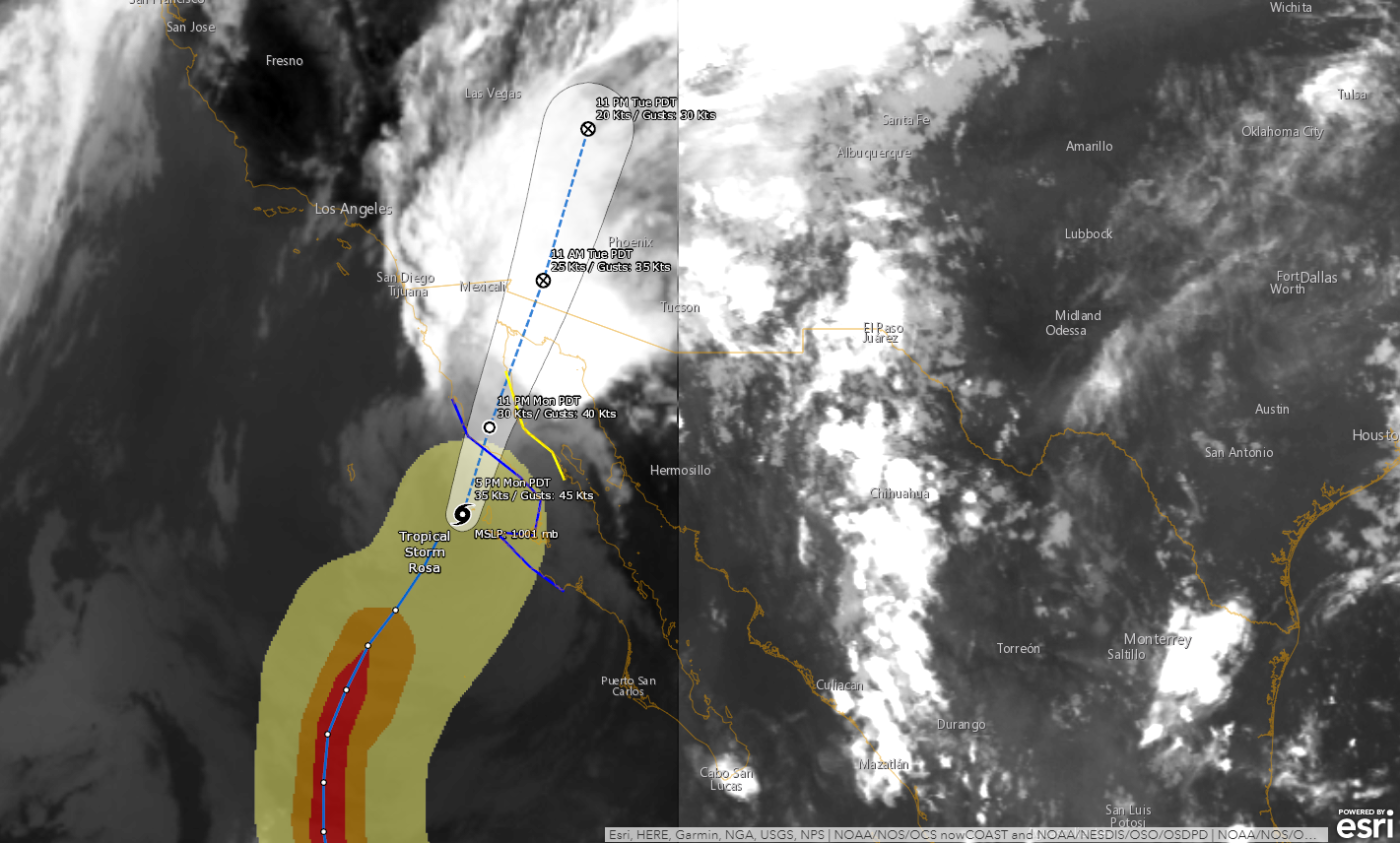 MEXICO CITY -- Tropical Storm Rosa soaked northwestern Mexico with heavy rains as it neared the Baja California Peninsula on Monday, reportedly claiming at least one victim, and was projected to extend into a drenching of the Southwest U.S. Forecasters said the rain may cause "life-threatening flash flooding."

The U.S. National Hurricane Center (NHC) said the center of Rosa, which was a hurricane until late Sunday, should hit Baja California and Sonora state late Monday, bringing 3 to 6 inches of rain. It's then expected to move quickly northwestward as it weakens, bringing 2 to 4 inches of rain to central and southern Arizona and 1 to 2 inches to the rest of the desert Southwest, Central Rockies and Great Basin. Some isolated areas might see even more precipitation.

"These rainfall amounts may produce life-threatening flash flooding," according to the NHC. "Dangerous debris flows and landslides are also possible in mountainous terrain."

Rosa's maximum sustained winds had decreased to 40 mph as of Monday afternoon, and the storm's center was about 50 miles west-northwest of Punta Eugenia in Mexico. It was heading north-northeast at 10 mph.

Forecasts call for heavy rainfall in the watch areas, which include Las Vegas, Phoenix and Salt Lake City, with possible flooding in slot canyons and normally dry washes and a potential for landslides and debris flows from recent wildfire burn scars. National Weather Service meteorologists in Phoenix said central and northern Arizona stood to get hit with the heaviest amounts of precipitation.

Metropolitan Phoenix, where temperatures were above 100 degrees Fahrenheit only a few days ago, had already cooled to the 80s thanks to Rosa. Moisture associated with the storm arrived ahead of it, bringing rain Sunday night and Monday morning. Phoenix meteorologist Jaret Rogers said more showers were expected across central Arizona later in the day before a weakened Rosa arrives in the area Tuesday morning.

According to the National Weather Service, the entire Phoenix area is expected to see between 1 and 2 inches of rain. But some areas could see between 2 to 3 inches.

"All that means is conditions are favorable for flash flooding if it rains," Rogers said. "It doesn't mean something's imminent."

Several cities posted on social media that they were distributing sandbags.

Meanwhile, the Civil Defense agency for Baja California state said schools would be closed Monday in several communities, including the state capital of Mexicali, across the border from Calexico, California; San Felipe, on the northern Sea of Cortez; and south of Ensenada, on the peninsula's Pacific coast.

Federal authorities declared a state of emergency for Ensenada and Mexicali.

Classes were also suspended in communities in Sonora, where Civil Defense officials advised people to avoid driving on the coastal highway. The agency posted video online of floodwaters racing through an arroyo and covering a stretch of road, carrying trees and logs in the current.

Various Mexican media outlets reported that a woman was swept away by floodwaters and drowned in the city of Caborca, Sonora, on the Sea of Cortez.

Also in the Pacific, Tropical Storm Sergio was growing and could reach hurricane force, though it posed no immediate threat to land. Sergio had winds of 70 mph Monday morning and was centered about 696 miles southwest of Manzanillo, Mexico. The storm was moving west at 14 mph.