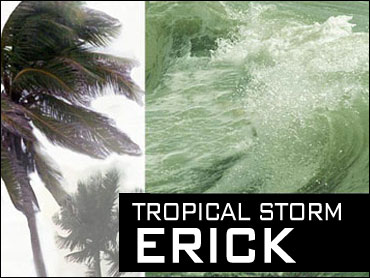 Tropical Storm Erick formed in the open Pacific early Wednesday morning, but is miles from land and is not expected to become a threat, according to the National Hurricane Center.

The storm was more than 2,000 miles away from the Hawaiian islands shortly before 6 a.m. EDT, hurricane specialist Richard Pasch said.

"It's very far away from everywhere," Pasch said.

Erick was moving west-northwest at 10-15 mph with winds of 35 knots, but only modest strengthening is expected, forecasters said.

In the Atlantic Ocean, the remnants of the short-lived Tropical Storm Chantal were expected to brush by Newfoundland on Wednesday, the Canadian Hurricane Centre said.

Chantal became the third tropical storm of the Atlantic hurricane season early Tuesday between Bermuda and Massachusetts. It was quickly losing its tropical characteristics over colder waters and becoming an extratropical storm that gets strength from colliding warm and cold fronts.