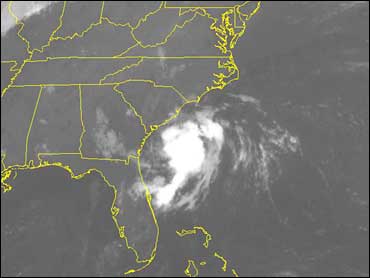 Forecasters at the National Hurricane Center say the depression off the Southeast coast has strengthened into Tropical Storm Cristobal.

At 2 p.m. EDT, the center of the storm was about 100 miles east of Charleston, S.C. and about 225 miles southeast of Cape Hatteras, N.C. It's moving toward the northeast at about 7 mph and was expected to hug the Carolinas' coast during the next two days.

Several inches of rain have already fallen in some areas along the North Carolina coast, and cities are under flood advisories as more rain is expected.

This is the first storm to threaten the U.S. this hurricane season, which runs through Nov. 30.

A tropical storm warning was in effect from the northern South Carolina coast to the North Carolina-Virginia border, the National Hurricane Center said.

Reid Hawkins, a National Weather Service meteorologist in Wilmington, N.C.,
cautioned against swimming along the North Carolina coast, citing reports of 6- to 8-feet seas, as well as a danger of rip currents.

Most of the strongest winds and rains have remained over water, but forecasters said the storm should move closer to land after it strengthens.

"We've had more isolated rain showers moving on shore," said Jonathan Lamb, a meteorologist with the National Weather Service in Charleston. "It's been very slowly organizing."

At 11 a.m. EDT, the center of the tropical depression was about 90 miles east of Charleston and about 250 miles southwest of Cape Hatteras, N.C. The depression was moving toward the northeast at about 7 mph and was expected to hug the Carolinas' coast during the next two days.

Less than one inch of rain had fallen in Charleston at midday Saturday, and Lamb said only one more shower was expected to pass through the area before the storm spun north toward Wilmington.