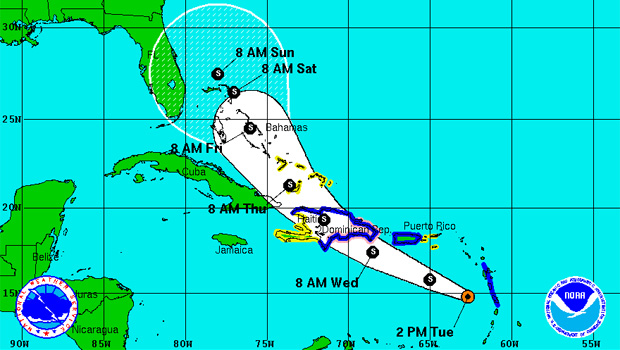 SAN JUAN, Puerto Rico Tropical Storm Chantal threatened to turn into a hurricane while it churned toward the Dominican Republic and Haiti as authorities there and in Puerto Rico warned of possible landslides and heavy flooding.

The storm was located about 215 miles (345 kilometers) south of San Juan, Puerto Rico around 11 p.m. EDT Tuesday, according to the U.S. National Hurricane Center in Miami. The storm had maximum sustained winds of 60 mph (95 kph), and was moving west-northwest at 28 mph (44 kph).

The center issued a hurricane watch for the Dominican Republic's southern coast, with the storm expected to be near or over the country by Wednesday afternoon. Chantal is then expected to be over the southeastern and central Bahamas on Thursday.

"We're sure nothing is going to happen," said Geovanny Batista, leader of an impoverished community in the capital of Santo Domingo built largely of wood, cardboard and zinc.

"We can't just go and leave behind our belongings," he said. "Thieves will come and take them."

Street vendor Marc St. Juste said he was unaware a storm was coming, but upon learning the news, he decided to remain outside a bit, if only to sell a few more snow cones in downtown Port-au-Prince, Haiti's congested capital.

"I'm going to go home as soon as possible," St. Juste said as he pushed his rickety wooden cart topped with frozen ice and colorful syrups. "But I'm still going to stay out to make as many sells as possible."

Chantal could be near hurricane strength before it reaches Hispaniola, the island shared by the Dominican Republic and Haiti. Both countries are vulnerable to flooding and landslides from storms, but widespread deforestation and ramshackle housing in Haiti mean even moderate rains pose a significant threat.

Haiti is already in the middle of its rainy season, with 279,000 people still living in grim settlements that popped up in the capital and elsewhere after the devastating 2010 earthquake.

Meteorologists with AccuWeather also warned that the U.S. territory of Puerto Rico would be hard hit, given that some 13 inches (33 centimeters) of rain already have fallen in the capital of San Juan since June, nearly twice the normal rainfall for that period.

"Much of the landscape is primed for excessive runoff and flooding," AccuWeather said.

Chantal was expected to produce rain and strong winds in Puerto Rico, with gusts of up to 60 mph (96 kph) in southern and mountainous areas, Krizia Negron, meteorologist with the National Weather Service, told The Associated Press. Chantal is expected to pass some 70 miles (113 kilometers) south of Puerto Rico early Wednesday, she said.

At least 17 roads will be closed as a preventive measure in the southern mountainous town of Yauco, where some 30 percent of the population lives under zinc roofs, Mayor Abel Nazario told the AP.

"When it rains a lot, a portion of the mountain comes down," he said. "That's always a concern."

Officials in the southern mountain town of San German also warned of possible heavy flooding, given that six rivers run through it, said Mayor Isidro Negron.

"When this floods, it doesn't forgive," he told the AP.

As of late Tuesday afternoon, a tropical storm warning was in effect for Puerto Rico, the entire coast of the Dominican Republic and Haiti, the southeastern Bahamas and the Turks and Caicos islands.

A tropical storm watch was in effect for the U.S. Virgin Islands, Vieques and Culebra and central Bahamas.

Up to eight inches (20 centimeters) of rain could fall in Puerto Rico, the U.S. Virgin Islands, Dominican Republic and Haiti.

Chantal had raced through the eastern Caribbean early Tuesday, with officials in Dominica reporting that heavy winds ripped off the roofs of several homes. No injuries were reported there or anywhere else in the region.