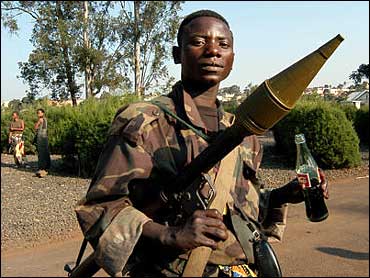 Government forces retook control of this strategic city from renegade troops on Wednesday, appearing to halt a military crisis in eastern Congo that threatened to derail a peace process that ended years of war in the vast country.

But U.N. officials warned that while the fighting may have stopped for now, Congo's fledgling transitional government still faces major challenges if it is to resolve the underlying political issues that led to the outbreak of violence in Bukavu.

Early Wednesday, thousands of cheering residents, some beating drums, others honking horns, turned out to greet soldiers as they marched into Bukavu, regaining control of the city from troops loyal to renegade commander Col. Jules Mutebutsi.

Mutebutsi and the bulk of his troops fled under the cover of darkness Tuesday.

But almost as soon as the celebrations in the city died down, soldiers and civilians began looting.

At one point, U.N. soldiers fired into the air to disperse civilians who gathered around a huge cache of weapons seized by the peacekeepers.

In a neighborhood that had been a Mutebutsi stronghold, the looting targeted the homes of Congolese Tutsi, a minority known as the Banyamulenge, U.N. spokesman Sebastien Lapierre said.

Mutebutsi is a Banyamulenge. He and another renegade commander, Brig. Gen. Laurent Nkunda, seized Bukavu on June 2, forcing Brig. Gen. Mbuza Mabe, the region's army commander, and his troops to flee.

The renegade leaders accused Mabe of persecuting the Banyamulenge, both civilians and those in the army. The United Nations is investigating the charges.

Congolese media reported Mabe telling residents Wednesday that the army had been divided because of what happened in Bukavu. "But we are now united and should forget our ethnic differences," he said.

Nkunda's fighters withdrew from Bukavu on Sunday, heading to the neighboring North Kivu province. He told The Associated Press Wednesday that he pulled out because the government had agreed to investigate the allegations of abuses.

But Mutebutsi's smaller force remained in Bukavu, and fought for several hours with Mabe's forces on Monday and Tuesday.

U.N. officials said the government had to speed up the process of integrating former rebels into the new army to prevent further uprisings.

"Integration of the army has to continue," Lapierre said.

The transitional government took office last June, ending a five-year war that drew in six foreign armies and started partly because of ethnic tensions between Tutsis and Hutus spilling over from neighboring Rwanda. An estimated 3.3 million people perished, mainly through war-induced disease and famine.

"It's the beginning of life on the run for him," Hussein told The Associated Press.

He said his soldiers briefly fought with a few dozen of Mutebutsi remaining forces on the outskirts of the city at dawn Wednesday. They then marched into Bukavu without facing any further resistance.

Eighteen renegade troops were captured and there were no government casualties, he added.

But Hamadoun Toure, the U.N. spokesman in Kinshasa, warned that Congolese forces must "avoid the settling of scores."

"It's very important to remind all the Congolese that they are in the same boat and they either make it or they sink together," Toure said.

The civil war was an outgrowth of the 1997 ouster of Congolese dictator Mobutu Sese Seko, when the country was known as Zaire. Rwanda and Uganda supported Laurent Kabila in deposing Sese Seko.

When Rwanda and Uganda suspected Kabila of giving sanctuary to Hutu rebels — linked to the 1994 Rwandan genocide — in eastern Congo, they supported armed incursions by rival rebel groups.

Burundi also sided with Rwanda and Uganda. Angola, Zimbabwe and Namibia backed Laurent Kabila. He was assassinated in 2001, and his son Joseph took over.

Although most of Congo has remained relatively peaceful since the war ended, fighting between former rebels and rival tribal fighters has plagued the eastern and northeastern parts of Africa's third-largest country.

The fighting in Bukavu also exacerbated already tense relations between Congo and Rwanda. Following the outbreak of fighting in Bukavu, Congo accused Rwanda of supporting Mutebutsi and Nkunda, their wartime allies. Rwanda has denied the allegations.