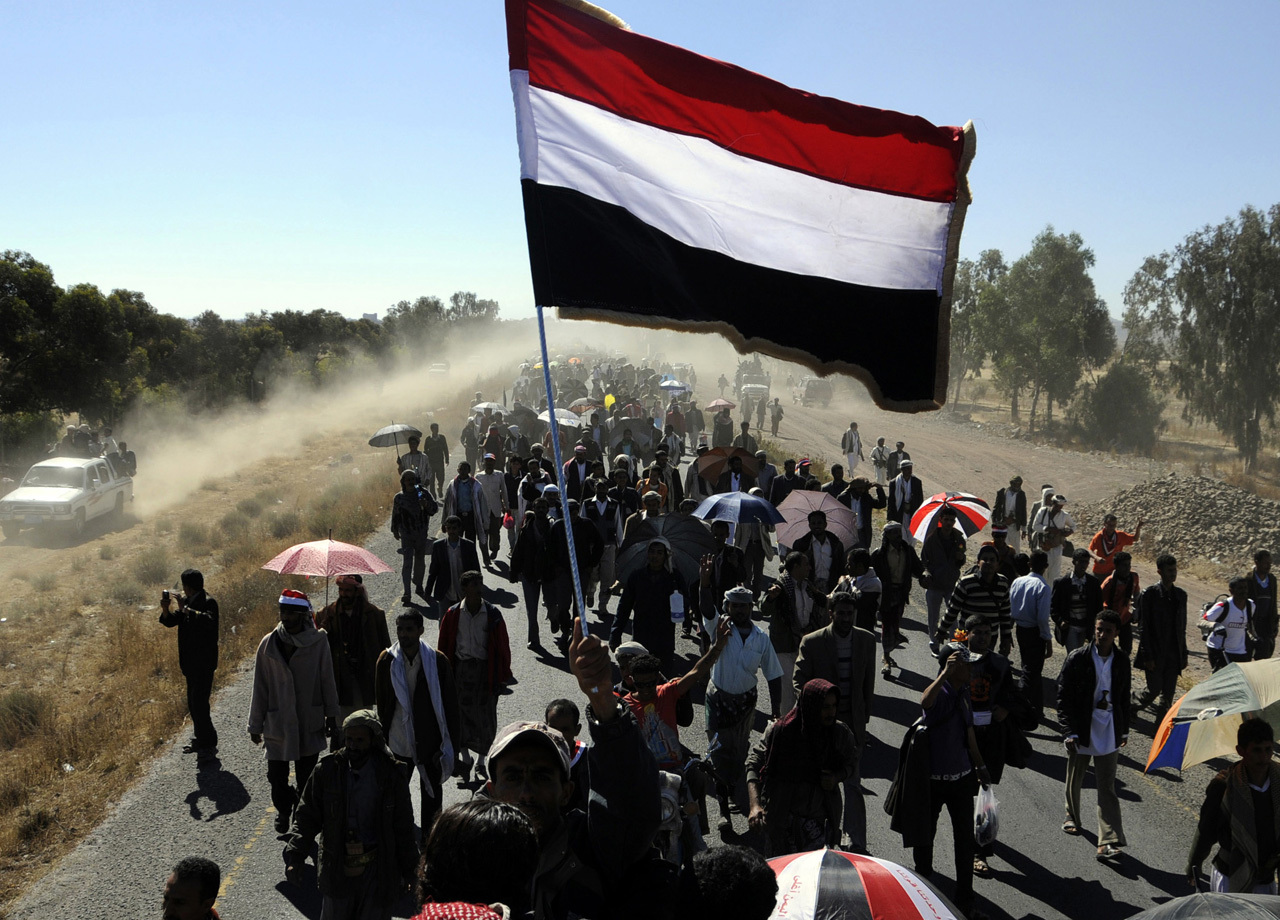 SANAA, Yemen — More than 100,000 protesters who entered Yemen's capital Saturday after a 4-day march from another city were attacked by elite troops loyal to outgoing President Ali Abdullah Saleh, who opened fire with guns, water cannons and tear gas. Medical officials said at least three protesters were killed, including a woman.

The crowd of protesters had marched from Taiz, a city that has been a major opposition center 170 miles to the south. The first of its kind protest, called the March of Life, aimed to put pressure on the country's new government not to grant Saleh immunity from prosecution.

The violence underlined the continuing turmoil in Yemen even after Saleh signed a U.S.- and Saudi-backed deal last month by which he handed his powers to his vice president and committed to step down completely in return for immunity.

Protesters who rallied by the thousands for the past 10 months rejected the deal, demanding Saleh be tried for his bloody crackdown on their movement.

At the same time, Saleh has seemed to continue to exercise influence through his relatives and loyalists still in their positions, even after Vice President Abed Rabbo Mansour Hadi formed a unity government between the opposition and ruling party. Forces loyal to Saleh have defied orders to withdrew from the streets of Sanaa after a deadline was reached Saturday to do so.

The marchers Saturday were trying to pass down a main avenue on which the presidential palace is located when it was met at Sanaa's southern entrance by a force from the Republican Guard, which is commanded by Saleh's son, and Central Security forces, led by Saleh's nephew, backed by tanks.

Troops fired to disperse the crowd, who responded by throwing stones.

A medic at the scene, Mohammed el-Qoutbi, says three protesters including a woman were killed, and more than 30 people were injured by gunshots and tear gas.

As clashes went on, thousands of protesters camping in Sanaa's Change Square, which is the epicenter of Yemen's protest movement, marched to the scene to join in. The protesters were cordoned by security forces before reaching the site of clashes. Witnesses said they saw tanks and artillery units from military camps around the capital also heading to the site.

In the evening, Hadi, who heads a Military Committee in charge of preserving security and ending military presence in the streets, ordered the Republican Guard and other security forces to open the way for the protesters to continue marching. The forces eventually did let the protesters continue their march after international ambassadors working with Hadi also intervened, officials said, speaking on condition of anonymity because they were not authorized to discuss the behind-the-scenes efforts.

The march came as Yemen's parliament convened Saturday for the first time since opposition and independent lawmakers suspended their participation in March to protest the crackdown against protesters.

Lawmakers were to discuss the program of the new national unity government, headed by veteran independent politician Mohammed Basindwa.

On Dec. 7, Basindwa said the government will focus on providing public services to the people, including electricity, water, fuel and basic commodities together with restoring security and stability.

Services and security have been in short supply during the unrest in Yemen, the poorest country in the Arab world.

However, the presence in the country of Saleh, his sons, family members and loyalists who still hold key positions could pose a challenge to the new administration.