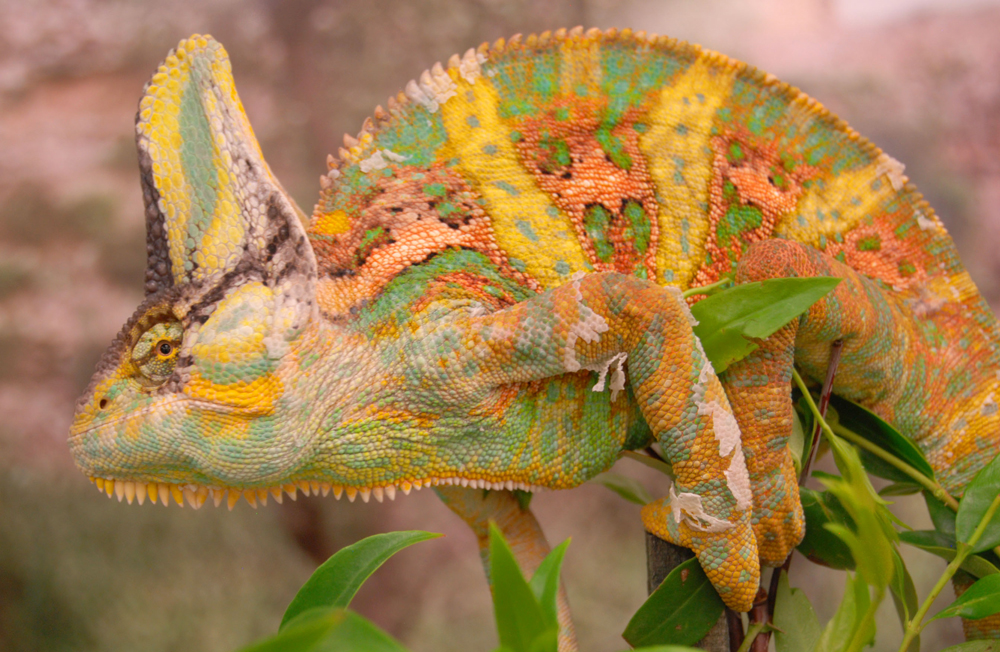 Color-morphing may sound less intimidating than, say, baring teeth or dragging hooves, but male chameleons rely on such psychedelic intimidation to ward off male rivals, according to a new study.

Chameleons are popularly thought to use their color-changing abilities to blend into their environments, but, in recent years, researchers have found this shade-shifting may play a larger role in social interactions than in camouflage.

In particular, scientists have noted that many male chameleons make themselves more conspicuous to others by changing colors along the sides of their bodies and tops of their heads before and during competitions. Researchers have assumed these changes convey certain messages but, until now, had not measured how the speed or extent of the changes may influence the outcome of a competition. [See Photos of the Color-Changing Chameleons]

Now, researchers at Arizona State University have shown that the faster and brighter a chameleon changes color, the more likely that male is to win a battle over territory. The team reports their findings Dec. 10 in the journal Biology Letters.

The group analyzed one-on-one competitions amongst 10 male veiled chameleons — a species native to certain mountainous regions of the Middle East — by pairing them in a total of 45 different combinations and enclosing the pairs in isolated study areas for 30 minutes each. An automatic digital camera snapped shots of the animals every 4 seconds. The team later used the images to study changes in 28 different color patches on each chameleon.

Some pairs never escalated into full-fledged physical fights over territory, while others resorted to head-butting, biting and lunging, study co-author Russell Ligon told LiveScience. In cases that did not escalate to fights, individuals with duller stripes along the sides of their bodies tended to back away from those with brighter stripes, suggesting that brighter stripes conveyed dominance. In cases that did escalate to fights, individuals that morphed colors more quickly and had brighter patches on the tops of their heads tended to come out on top, the researchers found.

Based on previous studies of photoreceptors in chameleon eyes, the team manipulated color and brightness data from their photographs to match chameleon vision and confirmed that dominance did correlate with brighter patches as perceived by the reptiles.

"This is the first time that anyone has been able to use the visual system of an animal to analyze color change during the behavioral contexts in which such color changes are used," Ligon said.

The researchers believe that coloration reflects the health and physiological strength of an individual, and sends messages to potential competitors accordingly. How an individual learns to recognize its own rank relative to others, however, remains unclear, Ligon said.

"It's possible that there is some overall template that the chameleons can recognize and place other individuals on that scale, possibly for them to get a sense for how worthwhile it might be to continue to pursue an interaction or call it off," Ligon said.

Devi Meian Stuart-Fox, a researcher at the University of Melbourne in Australia who studies chameleons but was not involved in the study, said she is not surprised by the findings; scientists, she said, have long recognized color change in chameleon contests. Even so, Stuart-Fox is still impressed by the results.

"It shows for the first time that the speed of color change can affect contest dynamics — a discovery only possible because of the sophisticated way they quantified color change," Stuart-Fox told LiveScience.

Though the study only focused on one species of chameleon, the results likely apply to many of the others as well, Stuart-Fox said, since other species also change colors during contests.

The findings add to the growing body of knowledge that evolutionary biologists are building to understand the great diversity of signals that exist in the animal kingdom, Ligon said.

Next, the team hopes to conduct experimental studies in which they manipulate the colors of individual chameleons and try to reproduce the results of this study. They also hope to study color change in other chameleon species to compare how messages differ across this animal group.