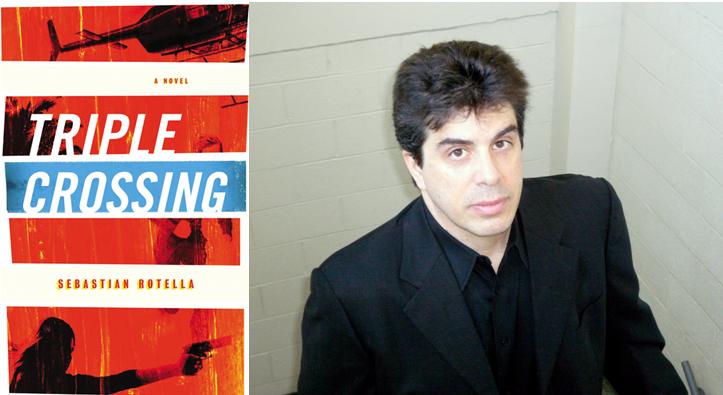 Jeff Glor talks to Sebastian Rotella about "Triple Crossing," a new thriller about rookie Border Patrol agent Valentine Pescatore, who gets recruited as an informant and ends up infiltrating the mafia.

Jeff Glor: What inspired you to write the book? Sebastian Rotella: I spent years covering the Mexican border and Latin America. I learned about drug trafficking, law enforcement, mafias, corruption, espionage and migration. I got to know fascinating and colorful characters including criminals and crime-fighters, some of whom died violently. Those experiences had a profound impact me. I became fascinated with borders, whether the U.S.-Mexico line or the triple border in South America where Brazil, Argentina and Paraguay meet. I had always wanted to write a novel and I decided my first book would explore the idea of the borderlands: a gateway into secret underworlds full of treachery and ambiguity, an international space that exemplifies the best and the worst of globalization. The borderlands force people, in fiction and real life, to make dangerous and dramatic choices. The narrative of Triple Crossing moves back and forth across the U.S.-Mexico line and then to the triple border following two protagonists: Valentine Pescatore, a rookie U.S. Border Patrol agent in San Diego who becomes an undercover informant, and Leo Mendez, a former Mexican journalist and human rights activist who is the chief of an elite anti-corruption unit in Tijuana. The people, places and events are grounded in reality, though I took full of advantage of the liberty that fiction gives a writer.

JG: What surprised you most during the writing process? SR: The mysterious and sub-conscious nature of the process. The basic story outline of Triple Crossing came to me quickly and in remarkably complete form, almost as if my mind had been working on it at some buried level. And certain characters took on a life of their own. There's a Mexican-American gangster in the book named Buffalo who is a hard-working family man with a code of honor--and the chief of a band of hired killers. He grew into a more sympathetic and significant figure than I had intended. Similarly, a character who appears late in the book, an Argentine private investigator and spy named Facundo Hyman Bassat, became one of my favorites. Apparently, the author is not always in charge.

JG: What would you be doing if you weren't a writer? SR: It's hard to imagine. But I guess I would have followed one of two family traditions and tried to be an academic or a musician. Or I might have gone into law enforcement/intelligence work.

JG: What else are you reading right now? SR: "Sacred Games," Vikram Chandra's epic about the Mumbai underworld. So far it feels like a South Asian blend of Dickens and Tom Wolfe. I just finished a spy novel called "Code Name Aphrodite" by Charles (Sam) Faddis, a former CIA counter-terror officer. It's set in Greece and has the kind of gritty authenticity I like.

JG: What's next for you? SR: On the journalism front, I am working on a documentary that is a joint project by ProPublica, my employer, and Frontline of the PBS network: a film version of reporting I have done during the past year, mainly published in the Washington Post. The one-hour film looks at how the investigation of the Mumbai attacks of 2008 revealed the involvement of the Pakistani security forces in terrorism and other secrets about terror and counter-terror in South Asia and the United States. It will be broadcast on Frontline November 22.

On the fiction front, I am working on a second novel about Valentine Pescatore, the American protagonist of Triple Crossing. It's too soon to get into specifics, but the story finds him a bit older and wiser and takes him into the world of international terrorism, espionage and organized crime.


For more on "Triple Crossing," visit the Mulholland website.