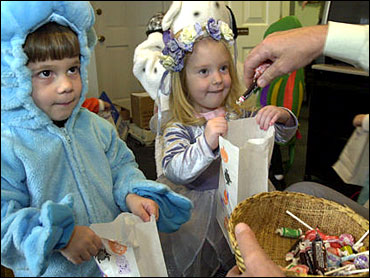 Two-thirds of parents say their children will trick-or-treat this Halloween, but fewer minorities will let their kids go door to door, with some citing safety worries, a poll shows.

The survey found that 73 percent of whites versus 56 percent of minorities said their children will trick-or-treat.

That disparity in the survey is similar to the difference in how people view the safety of their neighborhoods, according to the poll by The Associated Press and Ipsos. Lower-income people and minorities are more likely to worry that it might not be safe to send their children out on Halloween night.

Overall, 86 percent of those questioned in the survey said their neighborhoods are safe for trick-or-treating. Ninety-one percent of whites, compared with 75 percent of minorities, said they felt their kids would be secure when they went out seeking candy in their area.

Similarly, 93 percent of people earning $50,000 or more said their communities are safe for trick-or-treating, compared with 76 percent of those making less than $25,000.

Even many people who view their neighborhoods as safe take precautions.

Nearly two-thirds of the people in the survey said their households will distribute Halloween treats to children who come to call. Seventy percent of people in the poll who consider themselves liberals and 67 percent of the moderates questioned said they would hand out treats, compared with 55 percent of conservatives.

Of those adults whose children will not trick-or-treat this year, one-quarter cited safety worries and about one-half said they do not celebrate Halloween.

"It's demonic," said Donna Stitt, 37, a nursing aide from Barto, Pa., with four young children. "People are celebrating the dead. I'm not into that."