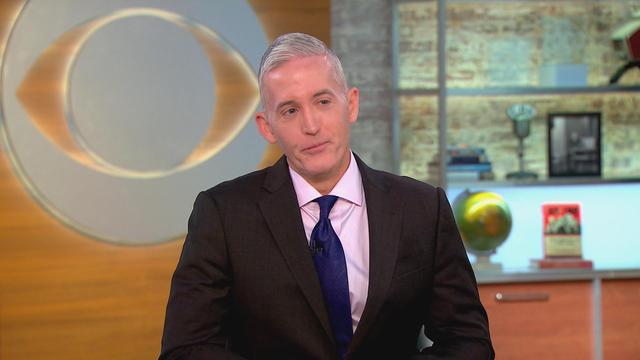 Rep. Trey Gowdy, R-South Carolina, says that the FBI has an "obligation" to run out any leads it may have -- including using informants -- to get to the bottom of the case of Russian interference in the 2016 campaign.

"When the FBI comes into contact with information about what a foreign government may be doing in our election cycle, I think they have an obligation to run it out," said Gowdy on "CBS This Morning" on Wednesday.

He added, "Based on what I have seen, I don't know what the FBI could have done or should have done other than run out a lead that someone loosely connected with the campaign was making assertions about Russia, I would think you would want the FBI to find out whether there was any validity to what those people were saying."

Gowdy said that following his briefing on Capitol Hill with top intelligence officials regarding the FBI's use of an informant to make contact with Trump campaign officials, he was certain that the FBI would conclude that Russia was indeed the target, and not Mr. Trump or his campaign.

Asked why the president continues to criticize intelligence officials' use of an informant as inserting a "spy" into his campaign, Gowdy said he didn't know and that he's never spoken with the president.

Gowdy said the term "spy" is not a term he's ever used in the criminal justice system as a former prosecutor and said such informants are used "all day, every day by law enforcement."

"Under cover, informant, confidential informant, those are all words I'm familiar with, I've never heard the term spy used," he said.

Gowdy said he thinks the president would have a different perspective if he was shown classified documents he and his colleagues were shown last week.  "I think his lawyers have an obligation to share with him what Devin [Nunes] and Paul [Ryan] and I saw last week, I'm convinced when he sees it, he's going to say 'you know what, that's what I told [James] Comey I wanted the FBI to do."

Meanwhile, asked if Mr. Trump should sit down for an interview with Special Counsel Robert Mueller and his team as part of their ongoing Russia investigation, Gowdy said that the president should tell Mueller exactly what he's shared in public: "He didn't collude with Russia, he doesn't know anything about it, and if anyone in his campaign did, he wants the public to know it, I think that's what he ought to tell Mueller."