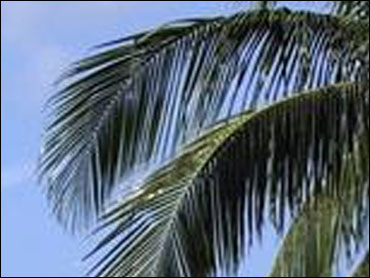 Israeli researchers who say they have germinated a sapling date palm from seeds 2,000 years old are hoping its ancient DNA may reveal medicinal qualities to benefit future generations.

Sarah Sallon, of the Louis Borick Natural Medicine Research Center in Jerusalem, said she and her colleagues used seeds found in archaeological excavations at Masada, the desert mountain fortress where ancient Jewish rebels chose suicide over capture by Roman legions in A.D. 73. She said they were the oldest seeds ever brought back to life.

"A lotus seed was germinated (in China) after 1,200 years, but nothing has been germinated coming from this far back, not to 2,000 years," she said.

The palm plant, nicknamed Methusaleh after the biblical figure said to have lived for 969 years, is now about 12 inches tall. Sallon and her colleagues have sent one of its leaves for DNA analysis in the hope that it may reveal medicinal qualities that have disappeared from modern cultivated varieties.

The date palms now grown in Israel were imported from California and are of a strain originating in Iraq, she said. The Judean date prized in antiquity but extinct until Methusaleh's awakening, might have had very different properties to the modern variant.

Sallon said the project is more than a curiosity. She and her colleagues hope it may hold promise for the future, like the anti-malarial treatment artemisinin, developed out of traditional Chinese plant treatment, and a cancer medicine made from the bark of the Pacific Yew tree.

"Dates were highly medicinal. They had an enormous amount of use in ancient times for infections, for tumors, " she said. "We're researching medicinal plants for all we're worth, we think that ancient medicines of the past can be the medicines of the future."

Until the DNA test results arrive in the coming weeks, the Israelis are closely observing the plant's physical development.

"We'll watch it and see if there are any differences. One of the leaves that have come up now is a beautiful leaf but it's much longer than the normal date leaf," Sallon said. "Every little thing that it does we shall watch and observe and hope to keep it alive."

If the plant survives, it will take some 30 years to bear fruit, provided it turns out to be female. Sallon, however, said that even a male will provide food for thought.

"The genetics of this plant will be very interesting, whatever sex it is," she said. "It's the females that produce the fruit...but the males are very valuable as well, they're no less valuable than the females."

Sallon said the tree shares its horticultural name, Phoenix Dactylifera, with the mythological Phoenix bird, which the ancient Egyptians and Greeks believed was reincarnated in a flaming nest at the end of its life. Date seeds were placed in the tombs of Pharaohs as a symbol of immortality, she added.

"It's thought that the tree was named after the Phoenix or the Phoenix was called after the palm tree because of its incredible powers of rejuvenation, because in a way it never died," she said.