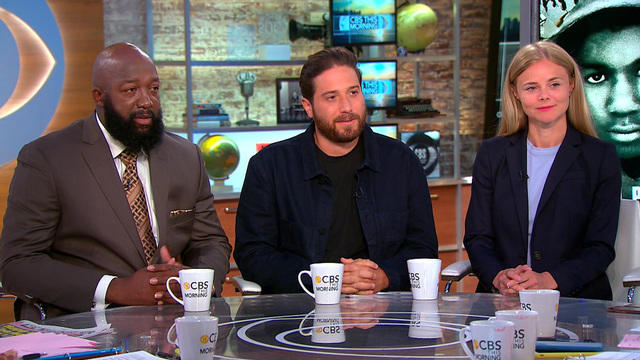 A new documentary series explores the long-lasting consequences of the 2012 killing of teenager Trayvon Martin, who was unarmed and walking home in his Florida neighborhood when he was fatally shot by George Zimmerman. Zimmerman was later acquitted of murder, and the case drew attention to Florida's controversial "Stand Your Ground" law, which permits the use of deadly force.

Appearing on "CBS This Morning" Monday, Trayvon's father, Tracy Martin, explained why the series, "Rest in Power: The Trayvon Martin Story," has such relevance six years after his son's death. "There are a lot of social injustices occurring in our communities, and the problem needs to be rectified," he said.

"I think the central thesis of our documentary is that Trayvon Martin's story ignited change in America, but also led to a backlash that we're currently experiencing in our politics," said series co-director Jenner Furst. "And we wanted to use the case to explore that backlash and understand how it's affecting our daily life now.

"I think you look at all the headlines, and so much has changed, but so much is the same. Look at what just happened to Ving Rhames [who recounted being held at gunpoint by police at his own home after a neighbor called to report a black man on the property], look at Markeis McGlockton [a black man shot and killed by a white man in an disagreement over a parking space]. That's a Stand Your Ground case. This is still a major issue in America. I think we have to face it and have conversations about it."

Earlier this year, Zimmerman was charged with stalking a private investigator and producer working on the series, of which Jay-Z is an executive producer.

Furst remarked he could say little about an ongoing investigation. "What I can say is that, it is alarming how unhinged this person is, and the fact that he is permitted to carry several firearms, rifles, shotguns, assault rifles and walk around with a bulletproof vest, after it's been proven that he killed an unarmed 17-year-old young man and also has abused several women who went to the police reporting those crimes. So, what we found is extremely alarming, and I think it's not surprising that he turned on [investigator] Dennis Warren and our producer, Mike Gasparro, and started stalking them."

CBS News reached out to George Zimmerman for comment but has not received an answer.

Co-director Julia Willoughby Nason said the series draws a direct line between the killing of Trayvon Martin and the rise of white nationalism in America.

"Trayvon Martin's death gave birth to Black Lives Matter; the verdict was when the hashtag was created," she said. "So, we chronicled the birth of Black Lives Matter all the way to the 'whitelash,' the opposite-side reaction to that. We go from Trayvon to Trump, and we see the connective tissue to the last six years and how the political landscape has been thrown into mass chaos today."

Asked about a recent Washington Post report which found that 70 percent of murder victims whose killers were never arrested were black, Tracy Martin said it shows how the scales of justice are imbalanced.

"We actually are in place where we made a little progress with our previous administration, and so I think it's going to take the power of the people getting out voting to shift the dynamics of how African-American men and women are viewed in this country," he said.

"CBS This Morning" co-host Anthony Mason asked Martin, "It cannot be easy to relive all of this. What made you want to go through with this project?"

"As parents, we felt as though the story was watered down that was being told about Trayvon, who he truly was, and the perception that he was a thug," Martin said. "This was a 17-year-old unarmed child on his way from the store, going home. It had nothing to do with him being a thug, and it had everything to do with racial profiling. And so we felt that, as parents, that we needed to tell the story of who Trayvon truly was."

Furst said he hopes "Rest in Power" will be a teaching tool. "People can watch it and if they're affected by it, if what they see they feel is wrong, they can use their civic duty of voting to change the story. Stand Your Ground, it's very unfortunate that the law was passed to begin with, but it's in over 20 states across this country.  Look at what's just happened to Markeis McGlockton. Look at what happened to Trayvon Martin. If you believe that was wrong, if you believe that people should not have the right to kill because they say they're afraid — which is a very subjective term and has a lot of racial undertones — then you should hold your politicians responsible, and this November you should vote those out of office who disagree."

"Rest in Power: The Trayvon Martin Story" debuts Monday, July 30, on the Paramount Network and BET.

To watch a trailer for the series click on the video player below.

Street to be renamed after Trayvon Martin
More