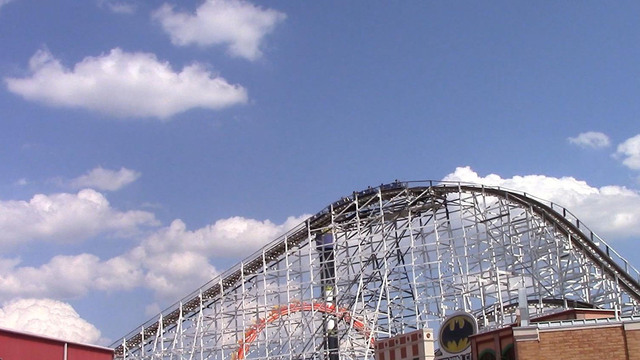 Roller coasters may be over 100 years old, but they are still bringing Americans today fresh excitement. Since the first roller coaster opened in 1884 on New York's Coney Island, the ride has gone through many changes to become what it is today.

"1884, you're talking about 20 years before the Model T, so the concept of being moved by any sort of vehicle was quite new," Derek Thompson, a senior editor for The Atlantic, said on "CBS This Morning: Saturday." "They actually had to push the car to get it going -- and it traveled at about 6 mph."

Leap-the-Dips was built in 1902, far before roller coasters had reached what Thompson calls their "golden age." The coaster is 40 feet tall and travels around 10 mph in a figure 8 shape. While this may not seem too impressive, it's important to remember this ride was built before the release of the airplane or the Model T.

Another notable roller coaster from 1917 is in Six Flags America in Upper Marlboro, Maryland. The Wild One features an impressive 88 foot drop and reaches a speed of 50 mph, bringing it much closer to the thrilling rides of today.

Back in Pennsylvania, The Thunderbolt is one of the faster roller coasters of the 1920s with a distinctive lift in the middle that sets it apart from others of that time. The coaster was built in Kennywood Park in West Miflin, Pennsylvania, and features a 90 foot drop and speeds of 55 mph.

As more roller coasters were built, certain parts of the country became competitive. Lagoon Park in Farmington, Utah, built The Roller Coaster, which is still the only wooden roller coaster in Utah. The 2,500 foot long ride opens with an immediate drop with mountains visible in the background at a speed of 45 mph.

But perhaps the most famous historic roller coaster still standing is The Cyclone, back in Coney Island, New York.

The Cyclone runs at about 60 mph, making it also the fastest ride on this list.