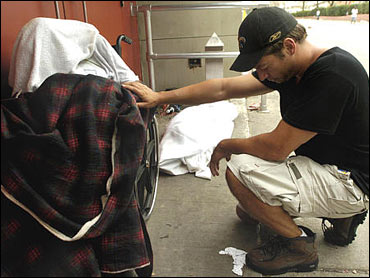 The suffering of New Orleans, long a culturally rich city, is being felt on a personal level by the many celebrities with relatives or other personal ties to the flooded city and the Gulf Coast have voiced their empathy for those devastated by Hurricane Katrina; some have been directly affected.

R & B legend Fats Domino, whose agent and niece reported him missing at midday Thursday, is reported to have been rescued. That's according to his agent, Al Embry, who quotes Domino's youngest son as saying the musician got a helicopter ride to safety, along with some family members, from his home in a flooded section of New Orleans.

Relatives who weren't a part of that ride had four tense days waiting for news of the fate of the 77-year-old entertainer, who is famed for unwillingness to leave New Orleans and had intended to ride out the storm in his home.

The first glimmer of hope for daughter Karen Domino White, tracking events from New Jersey, came in the form of a newspaper photo of Domino apparently being helped to safety.

The New Orleans Times-Picayune photo, says White, shows her dad, whose real name is Antoine Domino, in jeans and a blue-striped shirt being helped off a boat by rescuers.

Rapper and producer Master P, also a New Orleans native, told The Associated Press that his uncle, father-in-law and sister-in-law, among others, are unaccounted for. His father was missing until recently.

"We just got caravans of family members (evacuated)," he said. "It's just devastating."

Master P, whose houses and those of his family members are underwater, said he had created a foundation called Team Rescue and had helicopters searching for his missing family members.

Blues legend B.B. King, a native of Mississippi, also has loved ones in the area.

"I have some friends and family down in New Orleans, and also on the Gulf coast of Mississippi," said King. "I've tried to call them several times but I can't get through to them so I don't know where they are."

Harry Connick Jr., who grew up in New Orleans and is one of many musicians participating in benefit concerts for hurricane victims, told NBC's "Today" show the city's residents are "freakishly strong" and would rebuild.

He compared the rejuvenating spirit of New Yorkers after the Sept. 11 terror attacks to those in the hurricane-ravaged city.

Connick developed his music in jazz bands and at clubs in the French Quarter. His father, Harry Connick Sr., served as the city's district attorney for 29 years before retiring in 2003.

"I haven't slept in days. Although I now finally know that my immediate family in New Orleans is safe, I have not heard from many, many friends and other family members," said Connick, in a statement on his Web site. "It is hard to sit in silence, to watch one's youth wash away. New Orleans is my essence, my soul, my muse, and I can only dream that one day she will recapture her glory."

Actress Patricia Clarkson, whose credits include "The Green Mile," "Jumanji," and "The Untouchables," was relieved to know that her mom was safe.

"She's all right, otherwise I wouldn't be here," Clarkson said at the Venice Film Festival in Italy, where she was promoting her latest movie.

Rapper Juvenile, who left New Orleans before the hurricane hit, lost his home, but counted himself lucky.

"I am obviously devastated by my personal loss but thank God that I was able to get my family out to safety while many families were not so fortunate," Juvenile said in a statement. "I have lost some friends and to their families I send my deepest condolences."

Soul Asylum frontman Dave Pirner said he was anxiously watching news reports on television, hoping to see if his house in New Orleans had escaped destruction.

"We are, you know, examining our silver lining and being very lucky that we're out of harm's way," said Pirner, who was visiting his hometown of Minneapolis when the hurricane struck. "Our place in Minneapolis might be filling up with New Orleans transplants."

"She has nothing," DeGeneres told AP Radio. "She grabbed four pictures out of her house. She's lost her entire life."

Britney Spears, who was raised in Kentwood, La., posted a message on her Web site saying her family was safe and that her "thoughts and prayers go out to everyone" on the Gulf Coast.

"Charity begins at home," the Oscar-winning actor said. "We call on anybody who has even the thought (of giving) to get beyond the thought and help these people."

Also lending a hand for the relief effort are Green Bay Packers quarterback Brett Favre and Tennessee Titans quarterback Steve McNair, who both have homes in Hattiesburg, Mississippi.

The two football stars teamed up Wednesday and arranged to fill a tractor-trailer with relief supplies bound for Mississippi. The Packers pitched in by using the team plane to fly some generators and supplies to Nashville.

McNair is asking his fans to help him raise money for hurricane victims and is offering autographed photos for each minimum donation of $100 to his foundation.