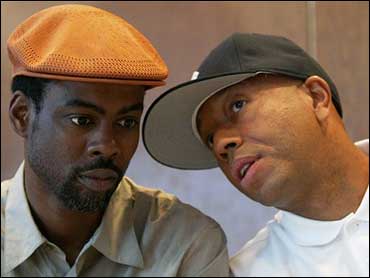 Television networks have lined up to host a variety of telethons to benefit victims of Hurricane Katrina.

BET is the latest network to announce a telethon to benefit victims of Hurricane Katrina, airing as a two-part, four-hour broadcast Sept. 9.

Russell Simmons, Chris Rock, Wynton Marsalis and rappers Master P, Juvenile and David Banner are among those scheduled to appear. The initiative is in partnership with the National Urban League and the American Red Cross.

Other previously announced efforts include:

"A Concert for Hurricane Relief," airing on NBC, MSNBC and CNBC at 8 p.m. Friday. The hourlong special, hosted by "Today" show co-host Matt Lauer in New York, is scheduled to include performances by Marsalis, Harry Connick Jr. and Tim McGraw. Leonardo DiCaprio and other celebrities are expected to participate.

Over the past three days, Americans reached into their wallets and offered their time to help victims.

The Red Cross has collected $21 million dollars in donations, including almost $15 million from individual donations through its Web site.

Fortune 500 companies, sports stars and entertainers also are making donations. And many churches and restaurants have been holding impromptu fund-raisers.

Celebrities are joining in to help. A shaken and emotional Ellen DeGeneres said her 82-year-old aunt had to quickly evacuate her home in Pass Christian, Miss., as Hurricane Katrina headed toward the Gulf Coast.

"My aunt has lost everything, she has nothing," DeGeneres told AP Radio Wednesday. "She grabbed four pictures out of her house. She's lost her entire life."

DeGeneres said she is talking to networks about organizing a telethon to raise funds for hurricane victims similar to what was done after the Sept. 11 terror attacks.

Lewis said Wednesday his telethon for the Muscular Dystrophy Association would include celebrity appeals for hurricane relief. MDA will donate $1 million as well to help victims in Louisiana, Mississippi and Alabama, he said.

"I need the American people to know I don't want you to forget my (MDA) kids because that suffering is ongoing," Lewis told a Beverly Hills news conference. But he called on donors to divide their compassion in half.

"If you want to send me 20 bucks for my kids, send 10. Send the other 10 to these people in this trouble. The disaster is literally that and it has to be addressed," the actor-comedian said.

Thousands of local radio and television stations pledged Thursday to help raise at least $100 million for the victims of Hurricane Katrina.

The National Association of Broadcasters, the industry trade group, said it would start the fund-raising by donating $1 million to the American Red Cross.

"Broadcasters are a lifeline to communities in times of crisis, and Hurricane Katrina has touched America's soul like no natural disaster in our history," said NAB president and chief executive Eddie Fritts.

The NAB said radio and TV stations will donate airtime for relief appeals. The stations will also set aside time on Sept. 9, dubbed "BroadcastUnity Day," for fund-raising drives, telephone banks, radiothons and telethons.

Celebrities will appeal for help for hurricane victims during the first four hours of the telethon and its concluding four hours. The broadcast begins at 9 p.m. EDT Sunday and ends at 5:30 p.m. EDT Monday (check local listings for station).

A special 800 phone number will be used for the Katrina donations, with proceeds going to the Salvation Army in the hard-hit states.

Hurricane relief efforts will be seen across a number of TV channels, which have been filled with images of tragedy and destruction caused by Katrina.

An aid effort was announced by MTV Networks, starting with a Saturday, Sept. 10, music special airing on MTV, VH1 and CMT and intended to raise funds for the American Red Cross and other organizations.

The special also will be available on MTV2, mtvU and VH1 Classic, as well as broadband video networks MTV Overdrive and VSpot.

The concert is part of what MTV Networks said will be an ongoing effort by its outlets to promote volunteer efforts as well as fundraising.

The hourlong special, hosted by Matt Lauer in New York, is scheduled to include performances by Marsalis, Harry Connick Jr. and Tim McGraw, all with ties to the affected areas, NBC said. Leonardo DiCaprio and other celebrities are expected to participate.

Viewers will be encouraged to donate to the American Red Cross Disaster Relief Fund.

Oscar-winning actor Morgan Freeman has helped organize an online auction to raise funds for disaster relief in the wake of Hurricane Katrina.

The auction, which also includes corporate-donated items, will open Friday on the Charity Folks Web site, an online auction venue, and run until Sept. 16, it was announced Wednesday.

Items include the opportunity to attend a screening of Freeman's upcoming film, "An Unfinished Life," a resort getaway and memorabilia packages from various movies.