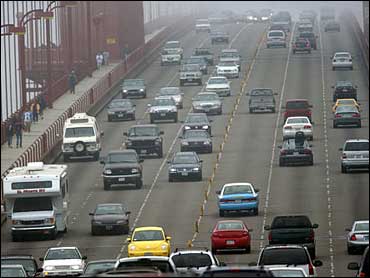 Americans are changing routes, leaving earlier for work and avoiding some roads to cope with increasing traffic, an Associated Press poll found. But they're not getting out of their cars.

Fifty-five percent said traffic in their area had worsened in the past five years, and three in 10 said it was much worse, according to the survey conducted for the AP by Ipsos-Public Affairs.

The poll also found only about one in 20 uses mass transit.

About 56 percent said they would be willing to pay higher taxes if that would lead to significant improvements in roads and public transportation in their area.

"A tax increase would be worth it, if they would really work to improve the roads," said Pat Parmerlee, a 58-year-old nursing home inspector from Williston, Fla., near Gainesville.

Some lawmakers from both parties have proposed adding about 5 cents a gallon to the gasoline tax to help pay for highway improvements. But the White House has threatened to veto any measure that includes a tax increase.

"Taxes aren't the answer," said Federal Highway Administrator Mary Peters. "They don't do anything to promote efficient use of the system."

Peters prefers such approaches as a 511 number people can call for traffic information, better coordination of traffic signals, faster notification of emergency help, lanes with tolls for those willing to pay and cooperative arrangements to encourage private investment in transportation.

Democrats say increased efficiency in transportation is only part of the answer and more money is needed for road construction.

About two-thirds of those polled said they allow more time for travel because of traffic problems while smaller majorities said they avoid certain highways and roads, leave earlier for work and avoid travel during certain parts of the day.

Almost 90 percent said they drive themselves to work. Though one in 20 uses mass transit, one in eight do in the Northeast where trains and buses are more prevalent.

The extra time needed for rush-hour traffic has tripled over the past two decades, according to research by the Texas Transportation Institute, a research agency for the Texas Department of Transportation and a top source of nationwide traffic studies.

A study commissioned by the American Highway Users Alliance found the number of traffic chokepoints — places where highways cannot handle all the cars — rose 40 percent over five years.

"No matter where you go, the traffic is getting worse," said Douglas Maze, a 64-year-old retiree who lives in Copiague on New York's Long Island.

One of the most significant changes in traffic patterns sees congestion spilling over into mid-size and smaller cities, said Tim Lomax, a research engineer at the Texas Transportation Institute.

Judi Mull, a 58-year-old resident of Franklin, Ind., said traffic in her town "is a mess."

"It was a small town when we first moved here," she said. "I'm actually scared to get out and drive."

Charles Palmer saw his commute grow to well over an hour after he moved outside San Francisco to find more affordable housing. Then the 33-year-old moved to Mooresville, N.C., on the southern edge of North Carolina.

Now he's watching the roads in the sprawling communities outside Charlotte start to overflow. He again finds himself avoiding certain roads, taking back routes and canceling side trips at certain times of the day.

"We're all eventually going to get swallowed up," he said.

The poll of 1,000 adults was taken June 18-20 and had a margin of sampling error of plus or minus 3 percentage points.