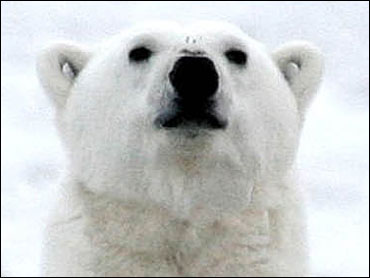 With global warming shrinking Arctic sea ice that polar bears depend upon for survival, the United States is seeking to remove another major threat: international trade in the bears' fur and other parts.

In a proposal filed this week, the Interior Department asked other countries to support a ban on the commercial trade of polar bears and to strictly regulate trophy hunting. The request, if approved, would give the bear the most stringent protection afforded under an international convention to protect endangered species.

It would also upgrade protections for the bear internationally for the first time since 1975, when the Convention on International Trade in Endangered Species, or CITES, required export permits for the polar bear.

Since then, mounting scientific evidence has shown that Arctic sea ice is melting and suggests that global warming may cause the disappearance of summer sea ice in 30 years.

In May 2008, the U.S. classified the polar bear as a threatened species, the first with its survival at risk due to global warming. The determination made all but subsistence hunting illegal.

The U.S. pitch argues that the loss of sea ice could make the toll of trade and hunting on the bear worse.

"The underlying melting of the Arctic ice is an issue no single country can address," said Tom Strickland, the Interior Department's assistant secretary for fish, wildlife and parks. "This is part of a comprehensive approach to try to provide additional protection for this important, iconic species."

Data available on polar bear trade shows that since the early 1990s the market for polar bear carcasses and parts has increased. From 1992 to 2006, approximately 31,294 live polar bears, carcasses or parts were exported to 73 different countries, according to data collected by the Convention on International Trade in Endangered Species.

Skins are the most popular export item, and Canada is the largest commercial exporter.

Environmentalists said Friday that they hoped the proposal, which will be voted on by 175 nations in March at a CITES meeting in Doha, Qatar, will end the Canadian hunt, by requiring trophy hunters to also get an import permit.

"Picking off animals in the most important population one by one is dangerous. It's time to end the hunt and trade there," said Andrew Wetzler, director for wildlife conservation at the Natural Resources Defense Council.

Besides polar bears, the U.S. is also proposing trade restrictions for six shark species, more than 30 coral species and is backing a bid by Monaco to ban commercial trade for the Atlantic bluefin tuna.