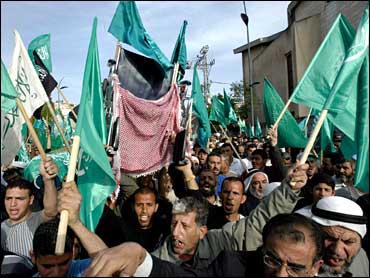 After weeks of international condemnation of American mistreatment of Iraqi prisoners, the State Department on Monday unveiled a report highlighting its worldwide efforts over the past year to promote democracy and human rights.

The report summarizes actions in 101 countries intended to advance press and religious freedom and to end trafficking in persons as well as torture.

"Advancing human rights and democracy around the world not only reflects our nation's deepest values, it is profoundly within our interests," Secretary of State Powell said in the preface to the report.

The report, entitled "Supporting Human Rights and Democracy, The U.S. Record 2003-2004," was to have been released two weeks ago.

Lorne Craner, who heads the State Department's human rights bureau, told reporters the release was delayed because of the furor over the prisoner abuse revelations.

"The message is what were doing around the world to promote human rights," he said. "We decided it wasn't the right environment to put that message out."

Powell, delivering the commencement address Monday at Wake Forest University in Winston Salem, N.C., said prisoner abuse in Iraq was a recurring issue during meetings with foreign leaders at an international economic conference he attended over the weekend in Jordan.

"In their disappointment about America right now, I told them watch America, watch how we deal with this, watch how America will do the right thing," Powell said. "Watch what a nation of values and character, a nation that believes in justice, does to right this kind of wrong."

He promised "multiple investigations" to get to the bottom of the scandal.

The report shows what the administration has been doing in response to rights abuses outlined in the annual country-by-country report on the rights situation worldwide. The most recent edition of that study was issued in late February. Both reports are mandated by the Congress.

The new report describes a host of activities to promote protection of human rights and democratic development.

Craner cited Georgia as an example of a country where, with U.S. help, a democratic breakthrough occurred earlier this year.

A freely elected government took power in Georgia in January after a popular uprising forced the removal of the predecessor government, which had staged a fraudulent parliamentary election last fall.

In the Middle East, the report assigned blame to both sides of the Arab-Israeli conflict.

"Israel's security forces killed at least 573 Palestinians and one foreign national and injured 2,992 Palestinians and other persons during the year. Israeli security units often used excessive force in their operations that resulted in numerous deaths," it read.

"Many members of Palestinian security services and the Fatah faction of the Palestine Liberation Organization participated with civilians and terrorist groups in violent attacks against Israeli civilians inside Israel, Israeli settlers, foreign nationals and soldiers," it continued.

In Haiti, where the United States was criticized for failing to support democratically elected President Jean-Bertrand Aristide, the report linked Aristide and his Lavalas party to extrajudicial killings, illegal detentions and repression of dissent.

The report called Aristide's departure "a constitutional transfer of power," but the former president has said he was forcibly removed from office.