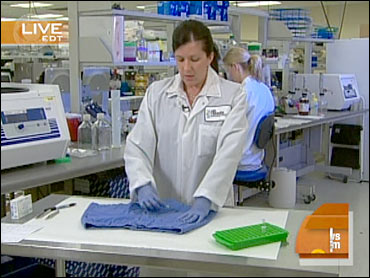 Crime scene DNA is typically recovered from blood or semen stains, but the DNA that exonerated members of JonBenet Ramsey's family in her murder came from invisible skin cells.

This so-called "touch DNA" is left behind when people touch things, because they naturally shed skin cells as touch things, and those cells contain the genetic material.

In this case, the new DNA was recovered by guessing where JonBenet's killer might have handled the long johns she was wearing.

"It's not a stain, you can't see it," said Angela Williamson, director of forensic casework at Bode Technology Group in Lorton, Virginia. That's the company that recovered the new DNA material. She led the work on JonBenet's touch DNA.

To find such DNA, "you have to have a good idea of where someone has been touched, or in this case, where you think the suspect would have touched" JonBenet's clothing, she said, or, she explained to co-anchor Harry Smith on The Early Show Thursday, "if the victim is surviving, to (have them) tell you where they were grabbed, where they were held down during the assault."

Investigators suggested that somebody pulling down her pants would have touched the waistband and the sides of the long johns, Williamson said. So Bode scientists scraped the surface of those areas with a sharp blade to see if they could find DNA.

While the amount of DNA they found was much less than would appear in a stain, there was enough to be processed in the routine way DNA is analyzed, Williamson said. (In other cases, so-called "low copy number DNA" has to be processed in a different way).

DNA from two sites on the long johns matched genetic material from an unknown male that had previously been recovered from blood in JonBenet's underpants. The matching DNA from three places on two articles of JonBenet's clothing convinced the district attorney that it belonged to the killer, and hadn't been left accidentally by a third party.

John Ramsey found his daughter's body in the basement of the family's home in Boulder, Colorado, on Dec. 26, 1996. A child beauty queen, she was 6 and had been strangled.