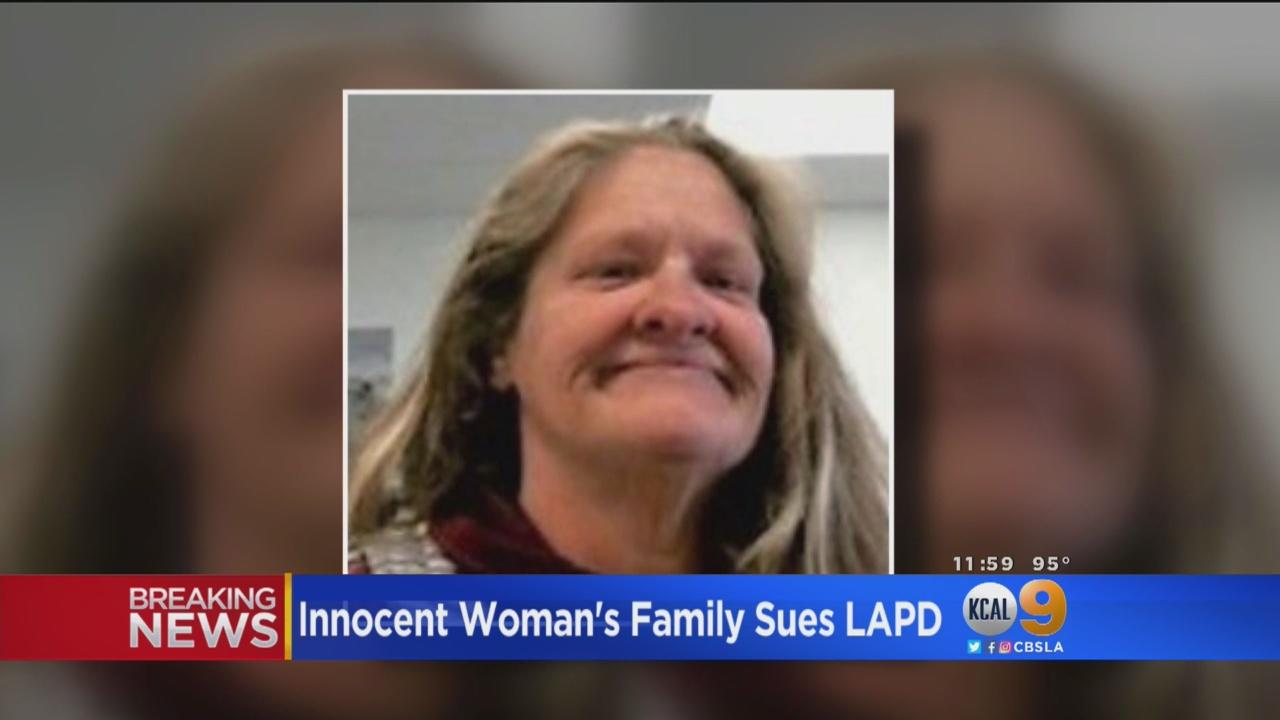 LOS ANGELES -- The family of a woman shot dead by Los Angeles police officers last month as she was being held hostage by a man held with a knife have filed a lawsuit, lawyers announced Wednesday. Newly released footage from officers' body-worn cameras shows the June 16 incident after officers were dispatched to a homeless outreach center on the report of a man with a knife assaulting a woman. Amid the tense standoff, officers opened fire on Guillermo Perez, 32, as he began to cut the neck of another woman, 49-year-old Elizabeth Tollison.

Both Perez and Tollison were killed by the gunfire.

According to Los Angeles police chief Michel Moore, officers had ordered Perez to drop his knife, but he refused, ultimately holding it to Tollison's neck. An officer had fired a beanbag shotgun during the confrontation, but it failed to stop Perez and the officers fired their handguns as the suspect pressed the knife into his hostage's neck, Moore said. Three officers fired 18 rounds.

The lawsuit filed by the Cochran firm claims wrongful death, assault and battery, and negligence against the City of Los Angeles and Los Angeles Police Department on behalf of Tollison's three adult children. Speaking at a press conference Wednesday, lawyer Brian Dunn said police didn't follow training when they failed to de-escalate the situation and when the three officers fired the 18 shots in close proximity to Tollison.

He called the death "totally and utterly preventable."

"The officers will say they fired in defense of Ms. Tollison, yet they killed Ms. Tollison," Dunn said. "...It is illogical and inconceivable for an officer on the scene not to realize that she will certainly be shot if 18 rounds are fired from opposite directions."

Tollison's son Jesse Pelaez said the videos showed officers "had no regard for my mother's life and shot her down."

"After watching all the videos on the news yesterday, I tried to understand how three police officers can shoot 18 times at a hostage for someone with a knife," he said. "There no way that could be right or okay."

Police said they responded to the church that provides food and support for homeless people after a 911 call reported a man had stabbed his ex-girlfriend. She was taken to the hospital with injuries that were not life-threatening.

"Drop the knife!" an officer repeatedly shouted at Perez, but he ignored the command.

An officer fires several rounds from a bean bag shotgun - which fires a small sack with metal pellets - but Perez appears to use a folding chair to deflect them.

Perez walks backward and approaches Tollison, who was standing nearby. He dropped the chair and put the knife to her throat.

Witnesses told police that Perez moved the knife in a "sawing motion against her throat and cut her throat," Cmdr. Alan Hamilton, who leads the unit that investigates police shootings, said.

Three of the officers then opened fire from their handguns.

Police chief Michel Moore told reporters that hostages' lives are a priority and recruits are generally taught to use a "precise head shot." He said an investigation will look at whether the officers' actions align with hostage training.

It was the first time in 13 years that Los Angeles police killed someone they consider an "innocent bystander or hostage." The second such fatal shooting came just five weeks later when police tried to stop an armed man from entering a Trader Joe's store and fatally shot the supermarket's assistant manager who was standing nearby.

Authorities said last week that an officer's bullet killed Melyda Corado before a man took hostages inside the store on July 21. Moore had defended the officers' use of deadly force as an attempt to stop what they feared could become a mass shooting.

"This is another case where officers were forced to make split-second decisions based on the actions of a violent individual," Moore said.

The police department will implement a new training program and is exploring how to equip officers with other non-lethal weapons, he said.