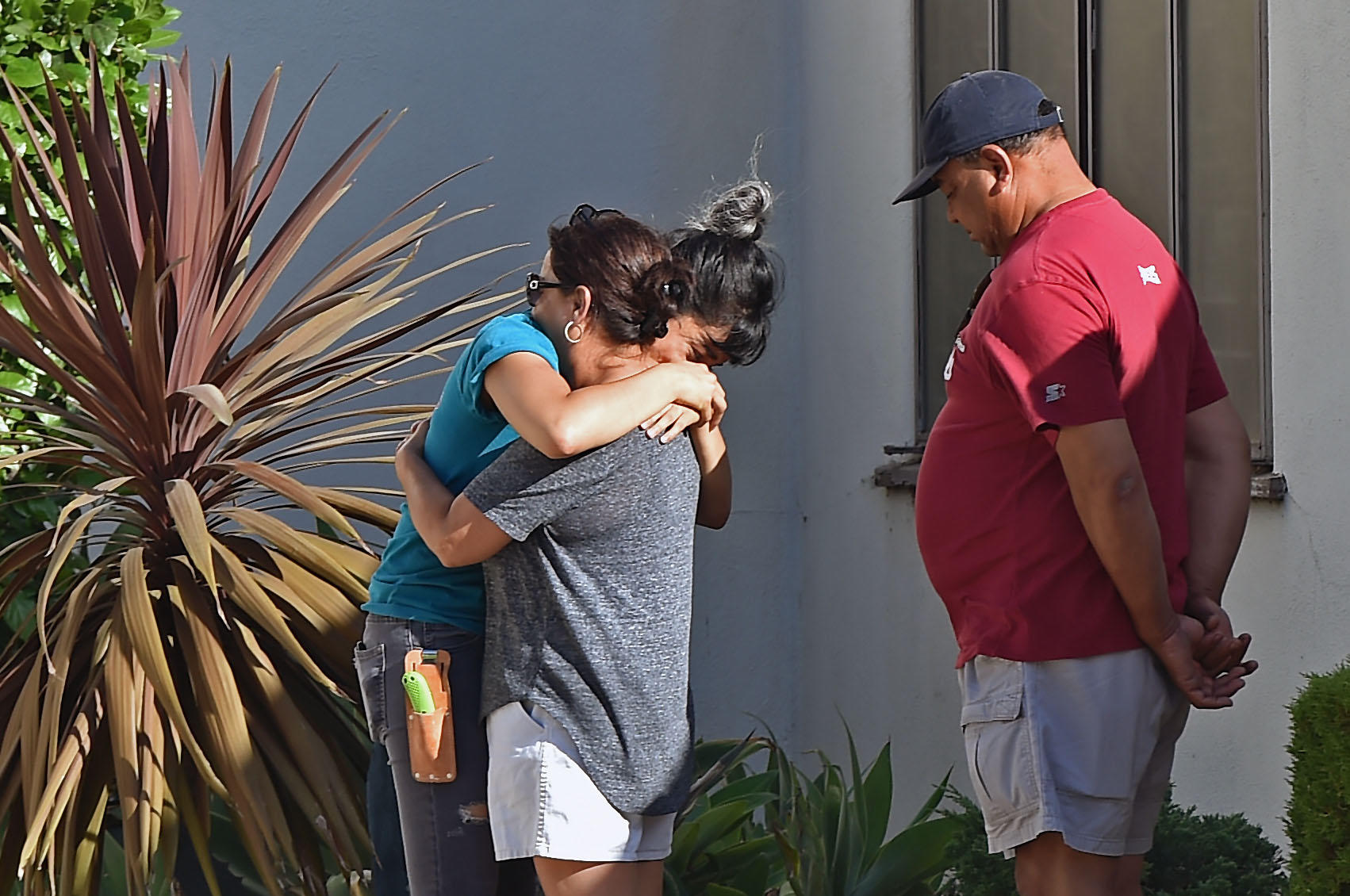 LOS ANGELES -- A man's feud with his grandmother turned into a bizarre and deadly weekend confrontation that ended with a supermarket worker dead and dozens of people held hostage in a store miles away. Gene Evin Atkins, 28, was booked Sunday on suspicion of murder after an explosion of violence that a relative said may have been brewing for weeks.

Melyda Corado, 27, was shot to death Saturday at a Trader Joe's market in the Silver Lake neighborhood after a gunfight that shattered the store's glass doors, witnesses said. The Los Angeles Times reported Sunday that it is unclear if Corado was shot by Atkins or responding police officers.

"I'm sad to say she didn't make it. My baby sister. My world," her brother, Albert Corado said on Twitter.

Grieving family members, co-workers and customers on Sunday remembered Corado as lively, hardworking and always smiling. A makeshift memorial of flowers, candles and notes grew on the sidewalk outside of the store.

"Yesterday marks the saddest day in Trader Joe's history as we mourn the loss of one our own," company spokeswoman Kenya Friend-Daniel said in a statement.

The violence began when Atkins shot his 76-year-old grandmother several times at their South Los Angeles home after she complained about his having too many television sets on, said a cousin, Charlene Egland.

The grandmother, Mary Elizabeth Madison, was taken to a hospital in critical condition. Egland said she had surgery and was improving Sunday.

Madison raised Atkins from the age of 7 and he had never been violent toward her but recently seemed upset and distant, Egland said.

"He didn't seem right to me," Egland said.

For the past two or three weeks, the two argued over Atkins' girlfriend, who was staying at their home, Egland said.

"She didn't want the girl over there anymore," Egland said.

Egland said she was walking toward the house when she heard about six gunshots. Another cousin who lives in the house came running from the porch and shouted to Egland, "I think Gene shot my mama!"

Police said Atkins' girlfriend was grazed in the head by a bullet, but the injury was not life threatening.

Egland ran to call 911 but Atkins allegedly forced his wounded girlfriend into his grandmother's car and drove away.

A stolen-car device helped police track the car to Hollywood but Atkins refused to pull over, police said.

During the chase, Atkins fired at officers, blowing out the car's back window, and there was more shooting before the car crashed into a pole outside the Trader Joe's, followed by another shootout with police, Police Chief Michel Moore said.

Customers and employees dove for cover and barricaded themselves inside storerooms and bathrooms as bullets flew.

Glass fragments injured a 22-year-old woman who later took herself to a hospital for treatment, police said.

As he heard gunfire, Sean Gerace, who was working in the back of the supermarket, grabbed several co-workers and the group made their way into an upstairs storage area. He placed a folding storage ladder outside of a window, helping colleagues escape to safety, he told KNBC-TV.

"I grabbed an emergency ladder, barricaded the hallway, grabbed a weapon, put the ladder out the window and just tried to get the attention of the SWAT officer," Gerace told the television station.

About three hours later, Atkins - who'd been shot in the left arm - agreed to handcuff himself and walked out the store's front door, surrounded by four of the hostages.

He was being held on $2 million bail Sunday and it wasn't clear if he had an attorney to comment on the allegations.

A gun was found inside the store, police said.

Trader Joe's said the store - known by customers as a neighborhood hangout with great customer service - would remain closed for the foreseeable future.

Atkins, who has two daughters, bounced between several jobs, including working as a security guard, but had been repeatedly fired, Egland said.

His grandmother had tried to help him find employment and "was just trying to make him do better," she said.

Atkins' cousin Deshon Hayward told CBS Los Angeles their grandmother was attempting to speak at the hospital, trying to find out what happened.

"That was her baby," Hayward told the station. "He can't be in his right mind.[…] What's going on? What made you do this?"