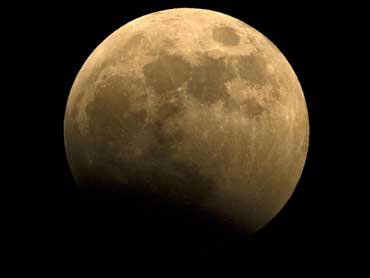 The Earth's shadow will creep across the moon's surface early Tuesday, slowly eclipsing it and turning it to shades of orange and red.

The total lunar eclipse, the second this year, will be visible in North and South America, especially in the West. People in the Pacific islands, eastern Asia, Australia and New Zealand also will be able to view it if skies are clear.

People in Europe, Africa or the Middle East, who had the best view of the last total lunar eclipse in March, will not see this one because the moon will have set when the partial eclipse begins at 4:51 a.m. EDT (0851 GMT). The full eclipse will begin an hour later at 5:52 a.m. EDT (0952 GMT).

An eclipse occurs when Earth passes between the sun and the moon, blocking the sun's light. It is rare because the moon is usually either above or below the plane of Earth's orbit.

Since the Earth is bigger than the moon, the process of the Earth's shadow taking a bigger and bigger "bite" out of the moon, totally eclipsing it before the shadow recedes, lasts about 3 1/2 hours, said Doug Duncan, director of the University of Colorado's Fiske Planetarium. The total eclipse phase, in which the moon has an orange or reddish glow, lasts about 1 1/2 hours.

The full eclipse will be visible across the United States, but East Coast viewers will only have about a half-hour to see it before the sun begins to rise and the moon sets. Skywatchers in the West will get the full show.

In eastern Asia, the moon will rise in various stages of eclipse.

During the full eclipse, the moon will not be completely dark because some light still reaches it around the edges of the Earth. The light is refracted as it passes through our atmosphere, scattering blue light - which is why the sky is blue - but sending reddish light onto the moon.

"When someone asks why is it (the moon) red, you can say because the sky is blue," Duncan said.

The next total lunar eclipse occurs Feb. 21, 2008, and will be visible from the Americas, Europe and Asia.