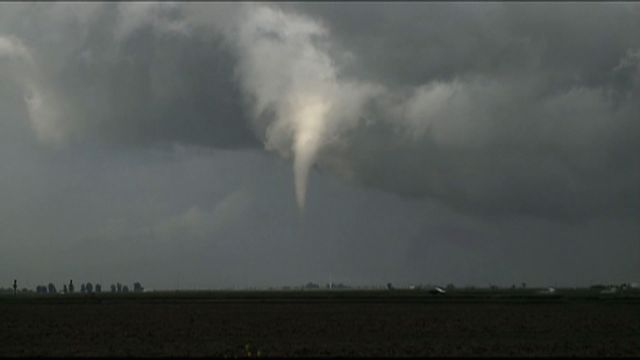 SAN FRANCISCO -- Tornadoes touched down during storms in Northern California, including one twister near Sacramento that damaged a dozen homes and left a path of debris about 300 yards long.

Twelve houses suffered roof damage and six reported fence damage when a tornado hit near Roseville in Placer County shortly after 6:15 p.m. Wednesday, Division Chief Kathy Finney of the city's fire department told the Merced Sun-Star. No injuries were reported and no residents were displaced.

The path of debris extended up to 300 yards, with a width of 10 to 20 yards, the newspaper reported.

A tornado also touched down in Ordbend, in Glenn County, the National Weather Service said. There were reports of at least four twisters, which are rare for California.

"I left this 15 years ago in the Midwest, and here we are with damage to our house from a tornado," Roseville resident Mark Thompson told CBS Sacramento station KOVR-TV.

Northern and Central California were drenched and wind-whipped by wild weather that brought thunderstorms and hail.

Heavy rain hit morning commuters in San Francisco but by the end of Wednesday only about a half-inch of the much-needed rain had fallen.

Other northern and central areas generally saw a quarter- to a half-inch, with Stockton receiving about three-fourths of an inch and an inch recorded in a few places.

San Francisco has received less than half of its average rainfall since last summer.

"So, I know people hate the rain here and I'm very not used to it," Vladimer said. "But at the same time, I've seen how low the water levels are. So hopefully this is getting over the mountains and into the reservoirs."

The north was in the midst of what forecasters were predicting would be the longest stretch of wet weather yet this year for the state suffering through a drought.

Showers were likely to continue through the weekend, especially from Friday afternoon through Sunday morning when the Sacramento Valley could get another half-inch to more than an inch of rain. The southern Bay Area could see up to a half-inch of rain, and the northern Bay Area could get as much as 1 to 2 inches, said Holly Osborne, a meteorologist with the weather service in Sacramento.

The Sierra Nevadas could receive 1 to 2 feet of snow above 7,000 feet.

But the showers might not end with the weekend, Osborne said.

"We're expecting unsettled weather even into early next week, so be prepared to bring your umbrella and rain boots," she said.