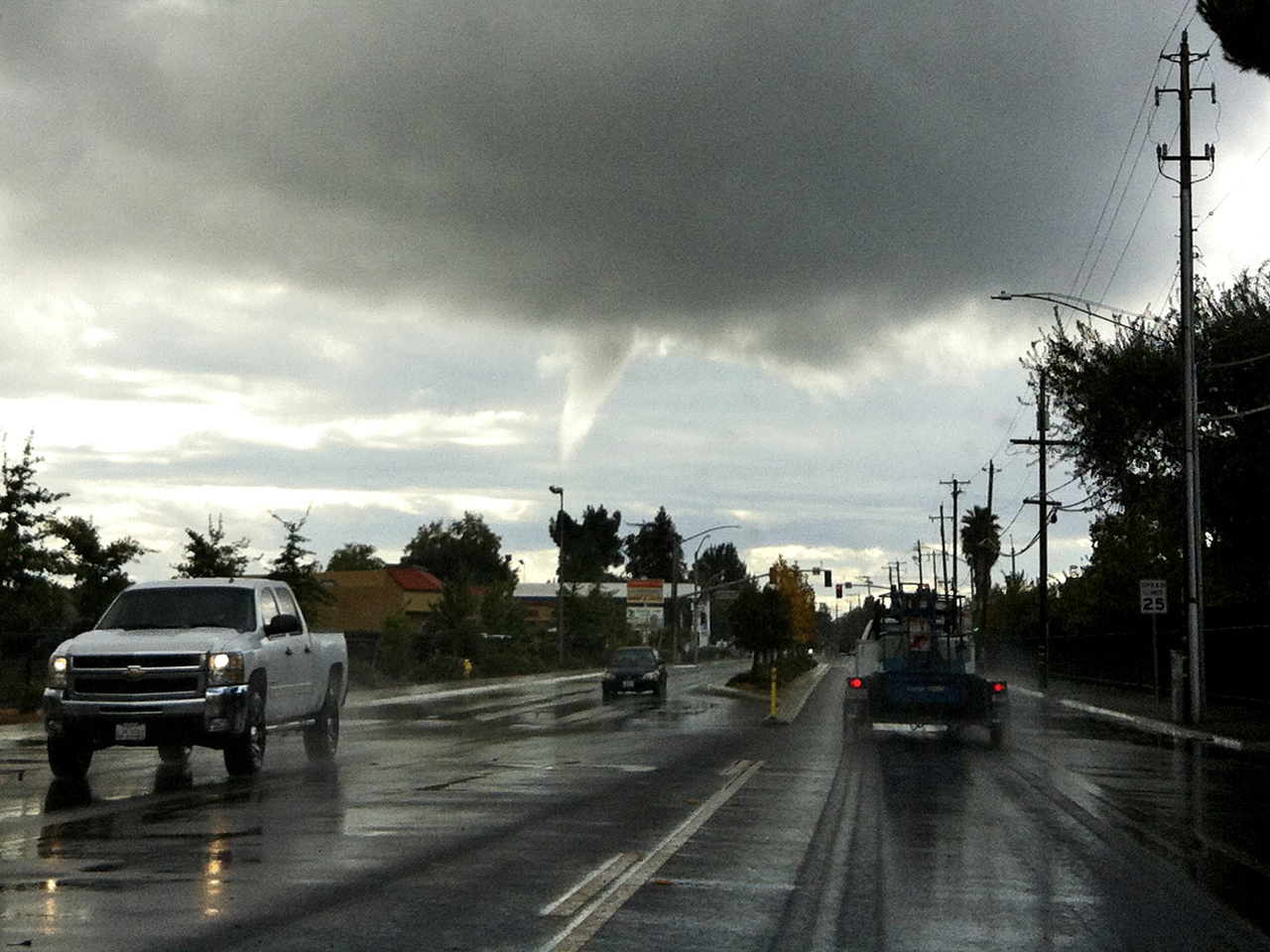 YUBA CITY, Calif. A storm system which brought snow to the Northern California mountains and rain to the site of the final game of the National League Championship Series also spawned tornadoes.

Minor damage was reported in the Sacramento Valley from funnel clouds, accompanied by hail, lightning and fierce winds.

CBS Station KOVR reports one tornado touched down just south of Yuba City on Monday afternoon. Sutter County firefighters say they saw the tornado touch the ground in the area of Railroad Avenue and Oswald Road around 3 p.m., about a mile from their firehouse.

"This is the closest I've seen," Capt. Ken Clark said.

KOVR correspondent Nick Janes reports it tore off parts of nearby roofs and scattered branches and debris.

"I stepped out on my back porch and there it was," resident Lorna Enns said. "You could see the funnel cloud and it just kept going!"

Two hours later the Elk Grove Police Department said a funnel cloud also damaged a building on Grant Line Road. A KOVR viewer reported seeing "semi trucks falling over like dominoes at the power plant off Grant Line. The craziest experience of my life so far!"

Trees toppled, fences tumbled down, and a large AC unit was moved by the force of a funnel one Elk Grove resident said "sounded mean."

"It sounded like a freight train or an airplane starting slow and going faster and faster," Carol Kearns said.

Just down the street, Krista Trinchera saw a dog house "go swirling by." The wind destroyed the Trincheras' backyard gazebo and took down a fence.

The weather system moved northeast from Yuba City and the National Weather Service issued seven tornado warnings throughout the day as the storm continued over El Dorado, Nevada and Placer Counties.

"My two cousins and I were playing golf at Mallard and were right in the path of the tornado," Michael Lukens told KOVR. "We clung to a tree as it passed over full of debris and pulling up trees as it went by."

The Yuba County Sheriff's Department also confirmed a touchdown in the Browns Valley area. The funnel cloud touched down in a rice field west of Browns Valley at Spring Valley Road. Deputies said there was no damage.