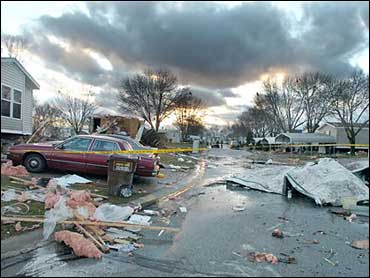 Strong storms including at least three tornadoes damaged or destroyed homes in parts of the Midwest, and rainfall brought fears of more misery to areas hard-hit by flooding last year.

The National Weather Service confirmed Monday that damage in Illinois and Indiana on Sunday was the result of tornadoes.

One struck Sunday in Columbia City, Ind., where three trailers were destroyed and about 20 others damaged at a mobile home park.

"I looked outside and saw a bunch of milk cartons go flying by," Don Hart said. "Then a great big sheet, about eight foot, of aluminum siding flew right next to my window."

Another tornado destroyed a church and a farm house near Greenfield, Ill., about 60 miles north of St. Louis, the weather service said. And thousands of people lost power Sunday across central Illinois, including most of the University of Illinois at Urbana-Champaign campus.

In northwest Ohio, high winds tore a roof off of one house, blew the windows out of another and damaged a barn near Defiance. The weather service was working to confirm whether a tornado had struck, meteorologist John Taylor said Monday.

Findlay, Ohio, was bracing for a possible rerun of last year's devastating flooding. The Blanchard River, which runs through downtown, rose from 7 feet Sunday to more than 15 feet by midday Monday.

The rising river closed dozens of roads and was expected to crest Monday afternoon at around 15.7 feet - more than 4 feet above flood stage. And what's worse, conditions forecast for the rest of the week are similar to February 2008, when the Blanchard crested at 16.5 feet at Findlay, city engineer Brian Hurt said.

Weekend rain prompted authorities in central and eastern Iowa, still rebuilding from disastrous floods last year, to warn people in low-lying areas to move to higher ground. Water poured through a broken levee Monday along the Iowa River near Wapello, but the town itself is on high ground and not in danger. The levee had broken during last summer's flooding and was never repaired, Louisa County Sheriff Curt Braby said.

In Wellman, Iowa, a man was treated for hypothermia after his pickup truck ended up in a flooded ditch Sunday. A firefighter who rescued the man also required treatment.

With more rain in the forecast across the region, officials were preparing for the possibility of further problems later in the week.

When the storm hit southern Indiana on Sunday, it threw an empty school bus atop one flattened house in Lawrence County, and at least 19 houses were damaged. Scott Ramsey said the storm hit just as he was rushing into the basement.

"I made it about to the third or fourth step down when I got blown down to the bottom," he said.

In Bay County, Mich., high wind drove ice over seawalls and into homes along a stretch of Lake Huron beachfront. Authorities evacuated about 30 homes.