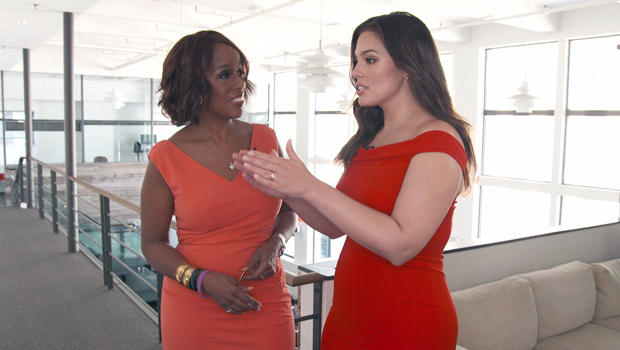 Ashley Graham, known throughout the world as a model who has gotten the industry to look at women's bodies differently, says she doesn't like the term "plus-size" to describe full-figured women, she tells CBS' "Sunday Morning," in an interview with "CBS This Morning" Co-Host Gayle King to be broadcast Dec. 3.

Graham, a businesswoman, model and author, was told early on she didn't fit into a modeling world known for stick-thin women. She tells King that agents told her she would never be on the cover of a magazine -- that she was "too fat."  Graham was lumped into the catch-all "plus-size" category for models who didn't fit the usual mold.

"And that is none of this," she added, pointing proudly to her own body.

Graham opens up to King about her childhood in Nebraska; being bullied by schoolmates because of her body; how her mother taught her to love her body; and her marriage to cinematographer Justin Ervin.

The 30-year-old model, who has her own Barbie Doll and lingerie collection, believes she has struck a chord with women around the world, and cites being featured on one of the covers for the 2016 Sports Illustrated swimsuit edition as a significant mile-marker.

"Sports Illustrated decided to have curvy women not only in their magazine but on the cover of their magazine," Graham said. "Now that means size diversity is here and it's real and it's not a trend."

Still, despite her success in a field some said she'd never survive, Graham has an interesting response when she's asked by others how they, too, can become models: