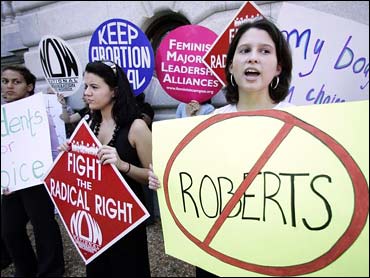 For a gang that has the legitimate constitutional responsibility to give "advice and consent" to President Bush when he picks someone for the Supreme Court, Republicans on the Senate Judiciary Committee sure spent a lot of time Monday afternoon telling Chief Justice nominee John G. Roberts, Jr. that he didn't really have to answer the truly important questions everyone wants asked and answered before he gets to serve on the High Court.

Indeed, one of the clearest and most ironic themes to emerge from an otherwise drowsy day of tired rhetoric was the consistent push by GOP Committee members to offer Roberts all sorts of legal and political justifications that would allow him to effectively thwart the very purposes behind the hearing itself.

The Senate Judiciary Committee is, in essence, holding a hearing to vet a candidate while telling the candidate that it's okay to fail or refuse to be vetted. How's that for a great example of your Congress at work? It's like a wolf taking out its teeth before it goes out for the hunt - and it's no wonder these guys won't get much more insight than the little we already have into Roberts' theories of life and law.

Read what Sen. Jon Kyl (R-Ariz.) told Roberts: "This committee's precedents, the rules of judicial ethics, and a sound respect for the unique role of the federal judiciary in our society all counsel in favor of some basic limits on the types of questions that a Senator should ask of a judicial nominee."

Here is what Sen. John Cornyn (R-Texas) said: "But just because we are curious does not mean that our curiosity should be satisfied. You have no obligation to tell us how you will rule on any issue that might come before you if you sit on the Supreme Court."

Not any case, any issue, Sen. Cornyn said. So what's left to ask him about? Whether he likes Indiana or Indiana State?

Sen. Richard Lugar (R-Ind.), who isn't even on the Committee but who helped introduced Roberts, also pushed for a lack of oversight: "Under the judicial confirmation standards that prevailed throughout most of our history," Sen. Lugar said after generally describing Roberts' qualifications, "my remarks could appropriately end at this point, and this Committee and the Senate as a whole could proceed to consider Judge Roberts' nomination in light of the outstanding qualifications just summarized."

Sen. Orrin Hatch (R-Utah) said: "I will be the first to admit that Senators want answers to a great many questions. But I also have to admit that a Senator's desire to know something is not the only consideration on the table." He then went on to give three reasons why Roberts ought not respond to questions he no doubt will be asked of Committee members.

Now, no one disputes that it would be inappropriate for nominee Roberts to come before the Senate and tell it definitively that he would or would not overturn Roe v. Wade. Such a statement would foreclose any meaningful evaluation by Roberts in any future abortion rights case.

Just as surely, it would be inappropriate and even intemperate for a future Chief Justice to tell the Committee that he wants to take the Court itself in any one particular jurisprudential direction. Such talk not only would tick off that nominee's future colleagues on the Court, it would also more than likely prove to be misleading since no one can ever truly predict how any nine people are going to interact over a long period - just look at how hard to predict the Rehnquist Court wound up being before its demise.

But that's not what the Senate Republicans were talking about. They were pitching for a much larger cone of silence surrounding Roberts; a cone that would protect him from both inappropriate questions and others which are perfectly legitimate - and in some ways vital.

Sen. Charles Schumer (D-NY) summed it up when he said he was surprised that his Republican colleagues had focused so much Monday on outlining the areas of questioning they think Roberts should not have to face - not a particularly good argument to start with, said Schumer.

It did cross my mind that if Roberts were as much a part of the legal "mainstream" as the White House professes him to be, there should be and there would be less inclination on the part of the president's party to shield the nominee from so much questioning.

Many of the folks who Monday said the Committee should go soft on Roberts were perfectly eager to encourage much more zealous questioning of Democratic judicial candidates when the situation then arose. And some Republican Senators, like Sam Brownback (R-Kansas) want to vigorously question nominee Roberts because they want him to roll back abortion rights rather than buttress them, as many Senate Democrats hope.

This hypocrisy, in case you are wondering, isn't limited to the GOP. Many of the same Democrats who - in flusher times (think Breyer and Ginsburg during the first years of the Clinton reign) - advocated restrained questioning of Court nominees made the opposite argument Monday.

You would think that the glass house reality of being a Senator in times like this would act as a brake on such silliness. But it hasn't and it doesn't.

The point is that in politics, too often style matters more than substance - that's why some senators Monday whined about the impact of media coverage on confirmation hearings even as they spent several hours preening for the cameras during "opening statements" that were generally as sappy as they were unnecessary.

Here's what the rule ought to be, for liberal and conservative judicial nominees alike, and whether the Senate and the White House are controlled by Republicans or Democrats.

It should be presumed that a judicial nomination hearing, especially for the Supreme Court and even more so for a Supreme Court Chief Justice, is designed to reveal as much as is humanly possible about the nominee's legal principles and philosophy except when the public discussion of those principles and philosophies would demonstrably harm public perception in the nominee's ability to fairly judge future cases.

What is about to take place is enormously important to your life and mine - on this point all of the pols agree. In fact, given Roberts' relatively young age, it could be the single most important hearing on anything having to do with the law that we will see in a generation.

But if Monday's start is a true preview into what we are about to see, you should have very little confidence that this Committee, as presently constituted, is going to help reveal what you really need to know about the guy who is about to become only the 17th Chief Justice of the United States.

That's a shame and it always will be: no matter how negligently the Senate handled Supreme Court nominees back in the 19th century.