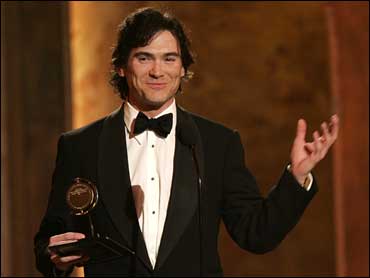 "The Coast of Utopia," Tom Stoppard's sprawling tale of 19th-century Russian intellectuals, and "Spring Awakening," a pounding post-rock musical of teenage sexual anxiety, dominated the 2007 Tony Awards as Broadway honored the best of what has been a surprisingly eclectic year, particularly for musicals.

"Spring Awakening" was the big winner with a total of eight awards. It won for best musical, orchestrations, best direction, best choreography, best book in a musical, best original score, and best lighting design - musical. Best featured actor in a musical went to John Gallagher, Jr. who portrays a manic student tortured with fear of failure in the hit musical.

"Heaven must feel like this," enthused the youthful Gallagher after reading off a laundry list of thanks including birthday greetings to a good friend. Later backstage, he said, "I can't feel anything right now, not even my arms. It's an honor and a thrill that never in a million years would I dream for myself."

2Bill T. Jones danced down the aisle as he accepted his award for choreography for the musical. "I am a happy man," said Jones.

"The Coast of Utopia" won a total of seven awards — a Tony record. In addition to winning best direction and best play it swept the technical awards for a play, earning honors for scenic design, costume design, and lighting design. Jennifer Ehle and Billy Crudup won for best featured actress and actor respectively for their work in the play.

"I left Hollywood when they told me I was over the hill and now I'm standing here with this most distinguished award for what I consider to be the role of a lifetime. I'm over the hill in a role of a lifetime. This is so encouraging!" said Christine Ebersole as she picked up her lead actress in a musical award for her tour de force performance as Little Edie in "Grey Gardens."

Mary Louise Wilson, who copped the featured actress in a musical prize for her role as the delightfully eccentric Big Edie in "Grey Gardens," came on stage and said, "Everyone has been so articulate." Then she let out a howl of delight as the audience cheered.

Frank Langella, winning his third Tony, took the actor in a play prize, for his sympathetic portrait of Richard M. Nixon in "Frost/Nixon."

"I am very proud to work among you splendid people," a gracious Langella said.

In something of an upset, an ebullient Julie White received the actress-play award for her portrayal of a conniving agent in Douglas Carter Beane's satiric "The Little Dog Laughed." Said a disbelieving White, "You Tony voters — what a bunch of wacky, crazy kids."

Within hours of its final curtain Sunday, "Journey's End," R.C. Sherriff's anti-war drama won the revival play award as producer Bill Haber came on stage with the entire cast to accept the war. Despite enthusiastic reviews, the production struggled at the box office and closed after a disappointing four-month run.

Business was robust on Broadway during the 2006-2007 season as both grosses ($939 million) and attendance rose, with the number of theatergoers topping the 12-million mark for the second year in a row. Thirty-five productions opened during the year, including 12 new musicals and 11 new plays, according to the League of American Theatres and Producers.

"We are fortunate that this season was marked by sensational new musicals and plays, offering audiences a diversity of shows to enjoy," said Charlotte St. Martin, the league's executive director. "We believe that this diversity is one of the strongest reasons why Broadway has had such a record year with attendance."

Even so, the 2006-07 season did not include any box-office bonanzas such as "Wicked" or "Jersey Boys," megahits from previous seasons that even today remain hot tickets. Yet "Spring Awakening" has done steady, if not sellout business, while "The Coast of Utopia" (now closed) was a sturdy seller during its limited engagement at the nonprofit Lincoln Center Theater. And such different productions as "Mary Poppins," "A Chorus Line," "Frost/Nixon," "Inherit the Wind" and "The Year of Magical Thinking" have managed to pull in respectable numbers of theatergoers.

The 2007 Tonys, broadcast by CBS from Radio City Music Hall, included 25 competitive categories and were voted on by 785 members of the theatrical community. The awards were founded in 1947 by the American Theatre Wing, which now produces the show with the League of American Theatres and Producers.