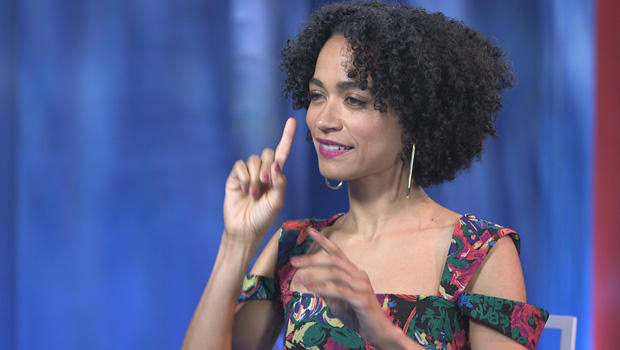 Just in time for Tony Sunday: the tale of an actress who never expected to see her name in lights. Jamie Wax has her story...

What's the best story on Broadway? Consider this: At age 40, Lauren Ridloff, a stay-at-home mom with no professional theater experience ever, and who is deaf, was offered a starring role.

"Is there a part of you that still can't quite believe it's real?" asked Wax.

And Ridloff put all of herself into the performance in the revival of "Children of a Lesser God." She plays Sarah, a cleaning woman at a school for the deaf who falls in love with an able-hearing teacher, played by Joshua Jackson.

When asked how unusual Ridloff's story is in the business. Jackson said, "Oh, she's a one of one. She is a totally unique woman, person, mother, and now actor."

Ridloff was born deaf to hearing parents. As a child, she worked on using her voice to speak, but spending time at a camp with kids and counselors who communicated only with sign language, led to an awakening, as Lauren told Wax through her interpreter, Candace Broker Penn:

"And for the first time, I never had to use my voice to communicate clearly with anyone. And I realized I could speak without thinking so much about how to say what I had to say.

"So, when I got back home, I really told my family, in a sense I 'came out' to my family. I said, 'I'm not going to use my voice anymore.' And my family accepted that, and accepted who I was."

She was asked, "Does this feel like a dream? "It's a wonderful dream!" she replied.

Ridloff's leap from unknown to star has become Broadway lore. She'd left her job as a kindergarten teacher to raise her children. That's when a friend said the director of the play, Tony Award-winner Kenny Leon, was looking for someone to help him learn about deaf culture.

"I walk into this coffee bar in Brooklyn, and there's Lauren standing in the center of the room, and she's [motioning]. Of course, that was our first lesson," Leon said.

"I wanted to meet him in places where he could see how I interacted with other people out in the world," Ridloff said. "And one day, out of the blue, he asked me to meet with the casting director. And I'd never once thought about me. I thought he was looking for a white woman, not a woman of color, not a woman who's a mother of two young boys. That thought never entered my head!"

"He and I met for a year at different locations – coffee shops, under the bridge, at galleries. I wanted to meet him in places where he could see how I interacted with other people out in the world. One day, out of the blue, he reached out to me and asked me to meet with the casting director. And I'd never once thought about me. I thought that he was looking for a white woman, not a woman of color, not a woman who's a mother of two young boys. That thought never entered my head."

Leon said, "I had one half of the love story, I got Joshua Jackson, and I thought, 'Who should I put opposite him?' And it just hit me: She could do this."

She got the part, winning over critics, and her co-star especially Jackson, whom you may also know from Showtime's "The Affair." He said, "I have never had a more intensely bonded work relationship in my life.

"I can't voice ahead of her signs, because the emotions of my voice and her hands won't match. If she's feeling something different, I have to be tuned in to watching what she's doing, so I'm giving a proper representation to the audience, you know, that's difficult!"

"Children of a Lesser God" explores what it means to be deaf in a world of sound. The role of Sarah was originated by Phyllis Frelich, who won the Tony in 1980. In 1987, Marlee Matlin took home an Oscar for the film version. "I feel honored to be a part of that history," said Ridloff.

Her new calling is intense, which is why she says she goes running in Central Park in-between shows. "It's my therapy; it's my way of re-setting myself."

Ridloff lives in Brooklyn with her husband, Douglas, an artist. He is also deaf, as are their two children.

Wax asked Douglas, "Of all the things you're proud of about your wife, what stands out the most to you?"

"I'm the most proud to be her husband," he replied. "I am proud that we've been together, that we support each other. So, I'm lucky to have her on my side."

Although the show ended last month, Lauren Ridloff is up for a Tony Award tonight for Best Actress in a Play. She also has an agent and manager, with hopes that this is just the beginning.

"I feel like I've discovered my passion for doing this," she said.

Jackson said, "What Lauren has to offer the world is everything. What she has contained inside of her is something beautiful."

As her director Kenny Leon noted, "The world just has to see her, and hear her."

So tonight, at the Tonys, Ridloff and her husband will be in the audience awaiting the next chapter in what has already been a fairy tale story: "I feel so proud to have this platform to talk about things that are happening right now in deaf people's lives," Ridloff said.