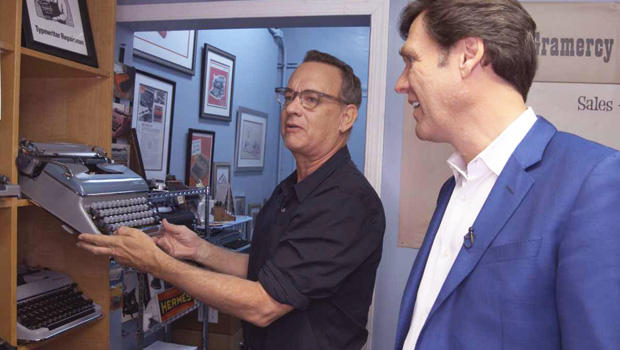 Classic typewriters figure in a new book of stories written by Tom Hanks. Yes, THAT Tom Hanks. In fact, you might say typewriters play a supporting role in his life, as Lee Cowan saw first-hand:

There aren't a lot of places left in our touch screen world, where an old typewriter can find respect.

Paul Schweitzer and his son, Justin, still sell and service these writers' tools of old.

CBS News' Morley Safer brought his typewriter here before he passed -- at least, so says the index card on file. After all, there are no computers here.

But as repeat customers go, there are few who beat Tom Hanks.

"That's a dense, dense, solid, solid machine," he said, testing one out.  "Look at that, isn't that a fine, manly, manly typewriter!"

Typewriters are this Oscar-winner's vice, his not-so-guilty pleasure. ("Beautiful knobs!")  He has a personal collection of more than a hundred -- nearly every style, make and year.

Funny that a guy who's name is synonymous with "You've Got Mail" loves something even more vintage than AOL itself.

"There's a percussive quality to writing sometimes, you know?" he said.

"If the drums are the backbone of any rock and roll band, the sound of a typewriter is the sound of productivity."

They intrigue him so much, Hanks even made typewriters the supporting characters in his very first book, a collection of short stories fittingly titled "Uncommon Type" (Knopf).

"Did you intend to weave a typewriter into each story? Or did that just sort of happen?" asked Cowan.

"Yeah, that was on purpose," Hanks replied. "It helped me formulate each story."

"Because each typewriter had sort of a personality?"

His short stories -- 17 in all - are not about typewriters, nor are they really about Tom Hanks, although you may catch glimpses of him, including his life growing up in a fractured home.

"When I was 10 years old, both my parents had already been married three times, and I'd lived in 10 different houses," he said. "And I thought of it as kind of like a cool adventure. I was confused a lot by why it happened. We just were moving; we just had new people in our lives. We didn't know why! They were good people!

"In some ways it's like I'm going back and looking at those times, for me and my siblings, and trying to put context on the confusion."

Besides his own life, Hanks also drew inspiration from his big-screen life, too. You won't find Private Ryan in his book, but you will find two World War II Army buddies who reconnect every year on Christmas Eve.

"The third act of these guys' lives are things that I always wondered about," Hanks said. "And I always thought, how did these guys set up the electric trains around the Christmas tree in 1954? How did they do that?"

He wondered, too, about Jim Lovell, the astronaut he played in "Apollo 13," and what it must have felt like to feel the pull of the Moon's gravity instead of the Earth's.

"There is a tick of a clock," Hanks said. "There's a moment that goes like this (snaps) when you leave one and begin the other. We all cross some brand of barrier like that -- a river, a boundary, an event, that is our own personal Rubicon."

Despite that vivid description, Hanks wasn't at all sure that he had a book in him.

"As far as the solitary, hard labor of being a writer, I think I thought there was some kind of trick to it, that I would never be able to master," he said. "Something that was more than just the one-damn-thing-after-another of writing. That's the beast, and you just keep plowing away at it."

"But that feeling when you do finish a sentence or a paragraph and you know you've gotten it, is great," said Cowan.

"Well, I can't say I ever, like, stopped once, said 'Black Jack!' I never necessarily felt that way. You can control a certain amount of your fate in the direction that it goes in, but there's also times when you just throw yourself up to the void and hope, you know, some fairy dust is sprinkled upon your efforts."

The first thing he remembers writing, other than a script, was a farewell to his longtime make-up artist, Danny Striepeke.

Striepeke, a 40-veteran of Hollywood, had transformed Hanks into everything from a bedraggled castaway, to a young man named Forrest. But when it came to writing his appreciation of Striepeke, Hanks asked for help from his friend, the late writer-director Nora Ephron.

"And I had no idea what that meant. She says, 'There's something here, but it's got no DNA to it.'"

He kept writing and re-writing, a skill he jokes he learned from watching Johnny Carson. "Kirk Douglas was on 'The Tonight Show,' talking about his memoir, ['The Ragman's Son]. And Johnny Carson asked Kirk Douglas, 'So how did you write?' 'Well, you know Johnny, the secret of writing is re-writing!' And I thought, 'Oh, I'm getting a literature lesson from Kirk Douglas!'"
He eventually got his appreciation of Striepeke published in The New York Times, in 2006.

The book, however, was a different story. It took him years to pound out, writing on planes, on movie sets and in hotels. His first public outing for a short story was in The New Yorker.

The response seemed good enough to keep on writing in that Hanksian voice of his.

From "A Special Weekend":

In the driveway was an actual sports car, red, a two-seater, with wire wheels. ... The wood paneling was like furniture. The seats smelled like leather baseball mitts. The red circle in the middle of the steering wheel said FIAT. (laughs) "That's right -- FIAT!"

His love of typewriters inspired his writing more than it facilitated it. He wrote his book, after all, on a computer. He's not an idiot.

That said, there's an infectious quality to this hobby that is hard to resist.

"If you wanted the perfect typewriter that would last forever, that would be a great conversation piece, I'd say get the Smith Corona Clipper," Hanks said. "That will be as satisfying a typing experience as you will ever have."

Turns out he's as good a typewriter salesman as an actor; Cowan bought it. Hanks then sat down and wrote him a "Congratulations New Owner" note.

From actor to author, Tom Hanks seems pretty comfortable in his new role, which may mean there's more ahead:

"If I see enough stories that are around, and start asking enough questions about where it would go, I hope to write more."