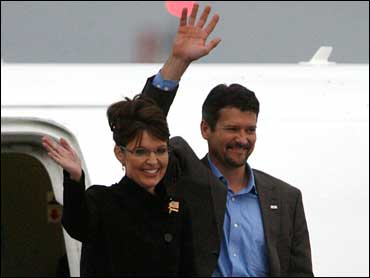 Alaska Gov. Sarah Palin's husband has refused to testify in the investigation of his wife's alleged abuse of power, and key lawmakers said Thursday that uncooperative witnesses are effectively sidetracking the probe until after Election Day.

Todd Palin, who participates in state business in person or by e-mail, was among 13 people subpoenaed by the Alaska Legislature. Palin's lawyer sent a letter to the lead investigator saying Palin objected to the probe and would not appear to testify on Friday.

"The objections boil down to the fact that the Legislative Council investigation is no longer a legitimate investigation because it has been subjected to complete partisanship and does not operate with the authority that it had at the time of its initial authorization," McCain-Palin presidential campaign spokesman Ed O'Callaghan said.

Sarah Palin initially welcomed the bipartisan investigation into accusations that she dismissed the state's public safety commissioner because he refused to fire her ex-brother-in-law, a state trooper. "Hold me accountable," she said.

But she has increasingly opposed it since Republican presidential candidate John McCain tapped her as his running mate. The McCain campaign dispatched a legal team to Alaska including O'Callaghan, a former top U.S. terrorism prosecutor from New York to bolster Palin's local lawyer.

In the letter, Palin attorney Thomas Van Flein lists nine objections to the Legislature's investigation into Gov. Palin. Van Flein also argues the subpoena is "unduly burdensome" because Palin has travel plans that require him to be out of the state.

Earlier this week, Alaska Attorney General Talis Colberg said the governor, who was not subpoenaed, declined to participate in the investigation and said Palin administration employees who have been subpoenaed would not appear.

State Sen. Bill Wielechowski, a Democrat, said the McCain campaign is doing all it can to prevent the Legislature from completing a report on whether the GOP's vice presidential nominee abused her power as governor.

Wielechowski and another member of the panel that summoned the witnesses, told The Associated Press that the witnesses can avoid testifying for months without penalty and that court action to force them to appear sooner is unlikely.

"If we had turned the rhetoric down and turned the pressure down to do some things we might have gotten voluntary cooperation," said Therriault, who opposed the subpoenas.

The McCain-Palin campaign said Thursday that Gov. Palin is cooperating with a separate Alaska State Personnel Board investigation into Troopergate. Palin initiated that investigation after she joined McCain's ticket. The three-member board is appointed by the governor.

"I can't say it enough, the governor is an open book on this matter," McCain spokeswoman Meg Stapleton said. "She is fully cooperating with the unbiased, legally appropriate and independent investigation of the State Personnel Board."

Palin fired Walt Monegan in July. It later emerged that Palin, her husband, Todd, and several high-level staffers had contacted Monegan about state trooper Mike Wooten. Palin maintains she fired Monegan over budget disagreements, not because he wouldn't dismiss her former brother-in-law.

Wooten had gone through a nasty divorce from Palin's sister before Palin became governor. While Monegan says no one from the administration ever told him directly to fire Wooten, he says their repeated contacts made it clear they wanted Wooten gone.

Alaska Senate President Lyda Green, a Republican foe of Palin, said Wednesday that the investigation is still on track.

"The original purpose of the investigation was to bring out the truth. Nothing has changed," she said.

Without the testimony, the retired prosecutor hired to head the investigation could still release a report in October as scheduled, based on the evidence he's already gathered. As of Thursday, Steven Branchflower had interviewed or deposed 17 of the 33 people he had identified as potential witnesses in the probe.

The Legislature does not have the leverage to compel any witness to testify before Nov. 4, said Wielechowski, a member of the Senate Judiciary Committee.

Wielechowski said he did not know whether Branchflower has enough material for a complete and fair report with so few witnesses. But he said delaying the probe would only politicize the matter more.

"It would be to appease the McCain camp," Wielechowski said. "They're doing everything they can to delay."

Ignoring a legislative subpoena is punishable by a fine up to $500 and up to six months in jail under Alaska law. But courts are reluctant to intervene in legislative matters and the full Legislature must be in session to bring contempt charges, Wielechowski said. The Legislature is not scheduled to convene until January.