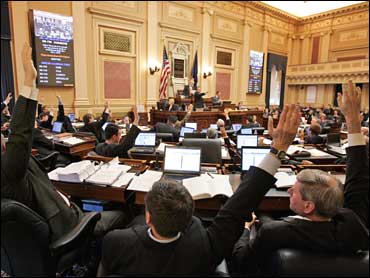 In a sign of how vilified smoking has become, lawmakers in Virginia - where the world's largest cigarette factory churns out Marlboros - passed curbs on smoking in restaurants Monday.

On a vote of 59-39, the House of Delegates approved a watered-down version of a bill that allows smoking in private clubs, walled-in restaurant enclosures, outdoor cafes or places minors can't go.

Proposed penalties for violations are hardly draconian: a maximum civil fine of $25 for smokers or restaurateurs who defy the law.

The bill already exempted private clubs and outdoor patios. On Monday, it was further diluted by Republican amendments that would allow smoking in any establishment off-limits to minors and in any restaurant rented for a private, invitation-only event.

The Republican amendments now send the bill back to the Democrat-dominated Senate, where it faces a dubious fate.

Still, the watered-down bill is a step beyond anything yet contemplated in Virginia. Year after year, more ambitious smoking bans have failed miserably before a legislature that meets in a Capitol where frescoes of golden tobacco leaves adorn the rotunda's ceiling.

Tobacco has been a mainstay since Virginia was founded at Jamestown 400 years ago and at one time was regarded as currency. As a mostly agricultural society though the midpoint of the 20th century, tobacco plantations underpinned the state's economy.

The original bill was a compromise between Democratic Gov. Timothy M. Kaine and Republican leaders of the House of Delegates, who have steadfastly resisted any curbs on tobacco.

The bill would not ban smoking outright, something Kaine sought to protect the health of restaurant workers.

And among other Republican amendments, a requirement that smoking areas be separated by a door and separate ventilation was weakened to require either a door or an independent air system, not both.

Even that version was unpalatable to many Republicans.

"Ask yourself, is this going to make it easier or harder for any of these mom-and-pops or any of these restaurants to continue to do business?" said Del. Bill Janis of Henrico, who denounced the bill as "tyranny" against free enterprise.

Twenty-three states and the District of Columbia have banned smoking in most public places, including bars and restaurants. Other states debating smoking bans this year include neighboring tobacco state North Carolina, along with Kansas, South Dakota and Wyoming.

The regulations passed by the commission two months ago also ban colleges from selling tobacco products on campus and will force smoking bars to shut their doors within a decade.

The Virginia measure managed to unite natural opponents of smoking bans - the muscular restaurant and tobacco industry lobbies - with the most ardent backers of a total ban, the American Lung Association and the American Cancer Society, who say it doesn't go far enough.

Philip Morris, which makes Marlboros and Virginia Slims at the world's largest cigarette factory about seven miles south of the Capitol and is a major funder of state political campaigns, opposes the measure.

Restaurant industry lobbyist Tom Lisk noted that nearly 70 percent of the state's restaurants have already banned smoking, and that business improved because of it. He also said requiring restaurants to establish smoking-only cocoons with separate heating and cooling systems could put hundreds of small establishments out of business.

And public health advocates ridiculed the notion that the bill would protect restaurant workers when it still allows for restaurant sections where smoking is pervasive, which they would have to serve.