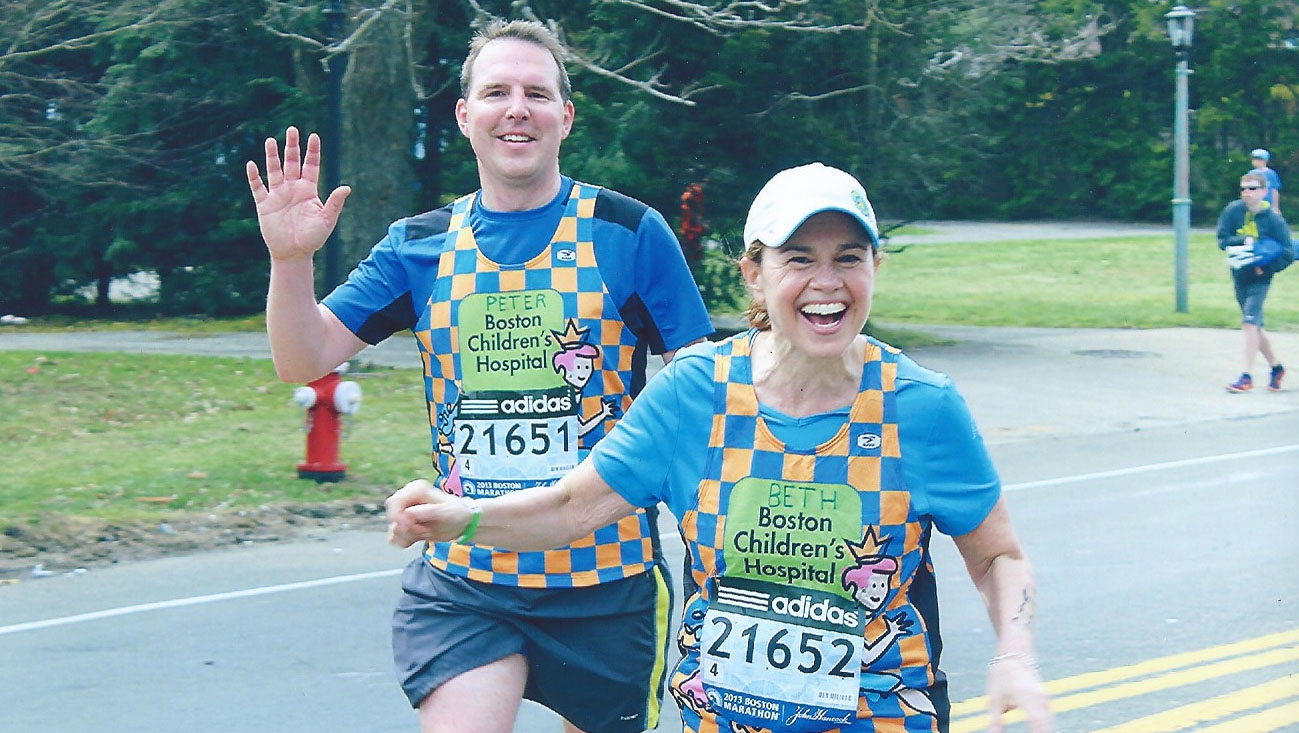 BOSTON - Elizabeth and Peter Milligan's dream of running the Boston Marathon to honor their children turned into a nightmare last year when twin bombs exploded before the kids' eyes. But this year, nothing's stopping them.

Running a marathon had always been a personal goal for the husband and wife. And after both of their children, Caroline and Connor, underwent intensive surgeries at Boston Children's Hospital, running to raise money for the hospital seemed like the perfect way to give back.

"We wanted to do something to push ourselves, something that went over the top," Elizabeth Milligan said.

"It was like everything I hoped it would be. I kept saying to Peter, 'I cannot believe we are doing this,'" Elizabeth said of the first portion of the 2013 Marathon.

Caroline and Connor were eagerly waiting for them on Boylston Street, close to the finish line, with friends and family. But when their parents were just miles away, the two bombs exploded right before their eyes.

Caroline said it was "absolutely terrifying." They quickly called their parents, who had just come over the top of the dreaded Heartbreak Hill, near Boston College. Peter said that his phone was on silent, but when Connor called, it miraculously rang.

"Who could be calling us?" Elizabeth recalled wondering. "Everyone we know knows that we are running."

She believes the phone rang because her best friend, who had died earlier last year, was acting as their guardian angel.

No cautionary actions were being taken around Elizabeth and Peter, so they kept running, figuring that the explosion was not something to worry about. But when ambulances came rushing by and suddenly every police officer along the route was talking on a radio, they realized something was very wrong.

Standing in front of the barricade at mile 24, a policeman told Elizabeth and Peter that the race had been shut down.

"We were both very upset. But it was just, well, what do we do next? So we just sort of stepped back and figured out a path to get to the kids," Peter said.

After 2 1/2 hours of wandering through the streets, losing cellphone service, and asking strangers for directions, Peter and Elizabeth were finally reunited with Caroline and Connor.

Elizabeth says the moment from that day that has stuck with her was when another mother who was from the city stopped looking for her own daughter to help them get to their kids.

"She is trying to get to her own daughter," Elizabeth said. "She has her own heartache, who knows how her daughter is and she stopped, turned around, took two steps back, and 'What do you need? How can I help you?' Gave us a hug before she left. And I thought, and there is the human spirit at its best."

In the wake of the marathon bombings, the Milligans heard terrible stories about families who lost loved ones that day. But Connor and Caroline told them, "You've got to do it again."

So this year, Elizabeth and Peter will be running again.

"But that was all taken away from us."

This year, they plan to celebrate, just as they intended to do last year. With 360 runners, the Boston Children's Hospital Miles for Miracles team is the biggest it has ever been. Elizabeth and Peter will be two of the 84 runners on that team who were unable to finish the marathon last year and have rejoined this year.

Caroline and Connor's surgeon, Dr. Travis Matheney, remains an inspiration to Elizabeth and Peter as they set out to run the 26.2 miles this year.

When Caroline had her first surgery in 2007, known as bilateral derotational femoral osteotomy, Elizabeth came in with seven pages of questions. When they came back for Connor's surgery, she only had one sticky note.

In both cases, the procedure realigned the children's hip and thigh bones with metal screws and plates so that they would grow straight. The initial surgeries were intense, leaving them bedridden for six weeks. The metal-ware was taken out with another surgery a year later. The family still has that metal-ware as a memory of what the children bodies endured.

Matheney, who says this surgery is pretty uncommon, said the Milligans "are the kind of folks that make you want to do the job each day." And they are forever grateful for the job he did.

Before the surgery, Caroline was constantly tripping when she walked and she could not ride a bike "like all the other kids" because her legs were too far turned in. Connor experienced intense pain in his hips and knees every time he played sports.

After the surgery, Caroline was back on her wakeboard. She also hit the stage by diving back into her passion for acting. Connor took up a new sport: cross-country. Why? "Just because I could," he said. This year he was also the captain of the ski team.

On Monday, Elizabeth and Peter will join the 36,000 other runners to finish what they started -- and the primary motivation behind their decision to run the Boston Marathon in the first place has not faded.