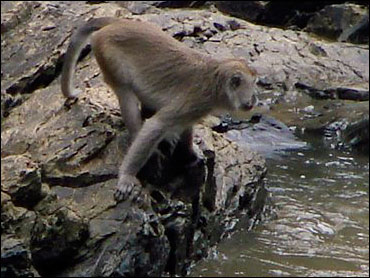 Scratch an itch and you get ... aaaaaah. Now scientists have watched spinal nerves transmit that relief signal to the brain in monkeys, a possible step toward finding new treatments for persistent itching in people.

More than 50 conditions can cause serious itching, including AIDS, Hodgkin's disease and the side effects of chronic pain treatment, said Glenn J. Giesler, Jr., a neuroscientist at the University of Minnesota in Minneapolis. Some terminal cancer patients even cut back on pain medication just to reduce the itch, he said.

Scratching can lead to serious skin damage and infections in people with chronic itch, he said. So scientists want to find ways for such people to relieve their distress "without tearing up their skin," he said.

While medications can relieve some kinds of itch, other cases resist current treatments.

Nobody knows just how scratching relieves itch. But the federally funded monkey study, reported Monday on the Web site of the journal Nature Neuroscience by Giesler and colleagues, takes a step in unraveling the mystery.

The scientists focused on a kind of spinal nerve that transmits the "itch" signal to the brain. These nerves reach into the brain from near the bottom of the rib cage.

The researchers sedated long-tailed macaques for the experiment and placed recording electrodes on their spinal nerves. They injected a chemical into the skin of a leg to produce itching. The nerves fired electrical signals in response.

Then the researchers scratched the leg with a hand-held metal device that simulates three monkey fingers. The firing rate dropped - the apparent signature of the "relief" signal.

In contrast, when researchers scratched the leg without causing an itch first, the firing rate jumped. So the nerves somehow "know" to react much differently if there's an itch to be relieved than if there isn't.

"It's like there's a little brain" in the spinal cord, Giesler said. "We really want to understand that, because then we think we'll understand how to relieve itch."

Maybe scientists can identify signals that tell these nerves to provide the relief response, and then try to mimic that action with drugs or some kind of stimulator, he said.

Dr. Gil Yosipovitch of the Wake Forest University Baptist Medical Center in Winston-Salem, N.C., who didn't participate in the study, said in an e-mail that his own work shows that particular brain circuits also play a role in how scratching quells itch.

He called the new study "very important" and said it opens further research on the nervous system and itching.