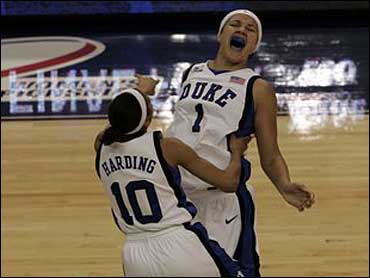 This column was written by Carrie Lukas.

Some sports fans descending on Cleveland this week have more than basketball on their minds. It's the 35th anniversary of Title IX, and activists are gathering to celebrate the anti-discrimination law with a three-day femi-palooza of seminars and dinners. Sunday's NCAA women's basketball "Final Four" will make a good backdrop: Crowds can applaud women's increasing athletic participation while appreciating female basketball prowess.

Yet the unavoidable reality is that the men's NCAA basketball tournament continues to overshadow the women's. Last year, the women's tournament earned television ratings fifteen percent higher than in 2005, but it still drew only a quarter of the audience of the men's games. Ubiquitous office pools and bars crowded with sports fans remain overwhelmingly a male-tournament phenomenon.

Why do basketball fans prefer watching the men? Title IX conference-goers may believe this demonstrates society's engrained sexism. Most others will find more benign explanations; namely, that the men's game is more fast-paced, dramatic, and thus appealing to a television audience. Or that men comprise the bulk of the viewing audience for sports, and may prefer watching male athletes. Yet this preference doesn't apply to all sports; women's gymnastics, women's figure skating, and women's tennis often draw greater audiences than their male counterparts.

Evidence of men's greater interest in watching and playing sports abounds. Recreational sports leagues open to all comers remain overwhelmingly male. Studies repeatedly have found that men watch, read, and talk more about sports than do women — five minutes in any sports bar would have yielded the same conclusion for the price of a beer.

Such common sense will be heresy, however, at the Cleveland conference. Many members of the organizations sponsoring the conference recoil from any suggestion that innate differences between the sexes contribute to disparate outcomes, whether on a basketball court or in the workplace. "Discrimination" is the only acceptable explanation when men out-participate or out-perform women, while women's triumphs ironically are ignored.

It's hard to imagine, for example, the gender-obsessed handwringers pondering why women outnumber men in so much of academia during their conference breakout session "Title IX: It's Not Just for Athletics." Speakers from "The Association for Gender Equity Leadership in Education" and "The National Alliance for Partnerships in Equity" will surely discuss achievement in the hard sciences (where men still outnumber women), but psychology and education (in which women earn about eight of ten bachelor's degrees) undoubtedly will be overlooked. Few will lament the inherent "inequity" in women constituting 58 percent of college graduates.

Indeed, athletics is one of the few areas of schooling where men predominate. A survey of high school seniors found girls were more likely to participate in music and performing-arts activities, academic clubs, student council or government, and the newspaper or yearbook. The only extracurricular activity where boys out-participated girls was athletics.

Title IX enforcers seek to change this, but not just by encouraging more female participation in sports, which most everyone sees as laudable. Far from merely barring discrimination, activist administrators have interpreted Title IX as demanding equal outcomes. Colleges and universities must demonstrate "participation opportunities for male and female students are provided in numbers substantially proportionate to their respective enrollments." Not surprisingly, schools eager to avoid costly lawsuits often make the numbers add up by reducing sports opportunities for men.

Stories of teams sacrificed to Title IX, such as James Madison University's eliminating seven male sports-teams last fall, occasionally make headlines. Yet a new analysis of NCAA data from the College Sports Council reveals the law's disturbing impact on male athletics. In brief, the average number of male teams offered by an NCAA Division I institution fell from 10.2 in 1981-82 to 8.9 in 2004-2005 (a decrease of 14 percent) while the average number of women's teams rose from 7.3 to 10.2 (an increase of 40 percent).

Some male sports are going extinct. The number of Division 1 men's gymnastics teams shrunk from 59 to 17 between 1981 and 2004; wrestling teams declined from 146 to 86; and even the number of Division 1A football teams — the villains in the eyes of Title IX's most active proponents — fell from 137 to 117. This isn't good for sports, and it's not good for women.

Title IX was sold as a way to ensure everyone has the opportunity to live up to his or her potential, not as a means to decimate male athletics. It's time to reform Title IX and its enforcement so that male and female sports can both thrive.
By Carrie Lukas
Reprinted with permission from National Review Online